Bayern Munich secured their path to the last 16 of the Champions League in snowy Kyiv. The game's highlight was a sensational overhead kick by Robert Lewandowski, a player whose artistry can get lost among the numbers. 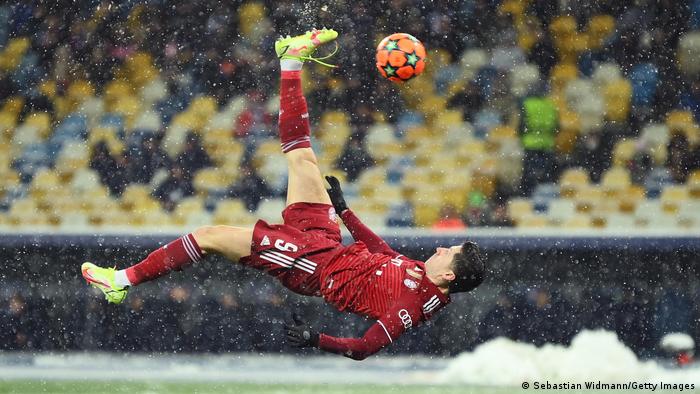 Robert Lewandowski's 82nd Champions League goal was a memorable one.

On a snowy night in Kyiv, it's nice to be able to rely on Robert Lewandowski. For a player as ruthlessly effective as the Pole, it's challenging to say anything about this masterful striker that hasn't already been said. So perhaps the numbers say it best: 82 goals in 101 Champions League games.

Lewandowski's goals-to-games ratio may be astounding, but to focus only on the numbers would betray the beauty with which he plays the game. His artistry is somewhat underappreciated, but he's a player with that rare gift, capable of producing something astonishing out of nothing. He's done it week after week, game after game, for the best part of a decade, and like Messi and Ronaldo, the biggest compliment one can pay him is that he makes the extraordinary ordinary. 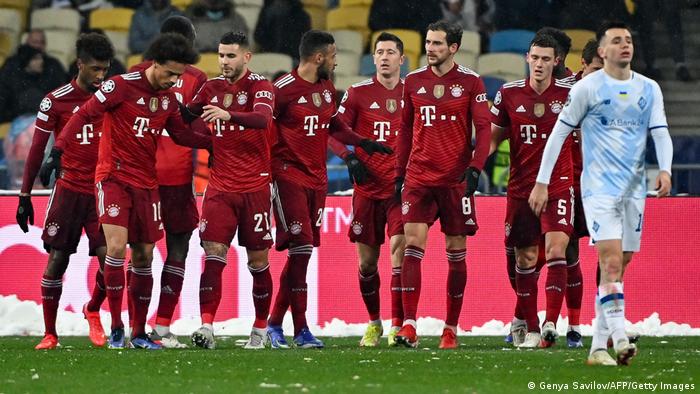 Bayern got the job done without defenders Niklas Süle and Dayot Upamecano, plus five players in quarantine

That's exactly what he did in the 14th minute at the Olympic Stadium in Kyiv. When the ball looped into the air off the unfortunate Dynamo defender Illia Zabarnyi, Lewandowski launched himself into the air and unleashed a breathtaking overhead kick, and the ball flew past a flabbergasted George Buschan into the Dynamo Kyiv goal. He, like the rest of us, had witnessed another stunning goal by Lewandowski.

Lewandowski's movement, in-game intelligence, courage and callous finishing, of course, sets him apart as the greatest striker of his era, and arguably any era. He also has all kinds of goals in his repertoire and, at 33, overhead kicks remain among them — although he hasn't scored too many of those down the years.

It's testament to the familiarity that the Bayern players already have with Julian Nagelsmann's system, and the effectiveness with which the coach has communicated his ideas, that Bayern can face a potentially tricky opponent on the road in difficult conditions without five regulars, and get the job done. Serge Gnabry, Josip Stanisic, Jamal Musiala, Eric Maxim Choupo-Moting and Joshua Kimmich, all unvaccinated, were unavailable for the trip to Ukraine as they were in quarantine following Niklas Süle's positive COVID-19 result. The injured Marcel Sabitzer and suspended Dayot Upamecano exacerbated Nagelsmann's selection problems. 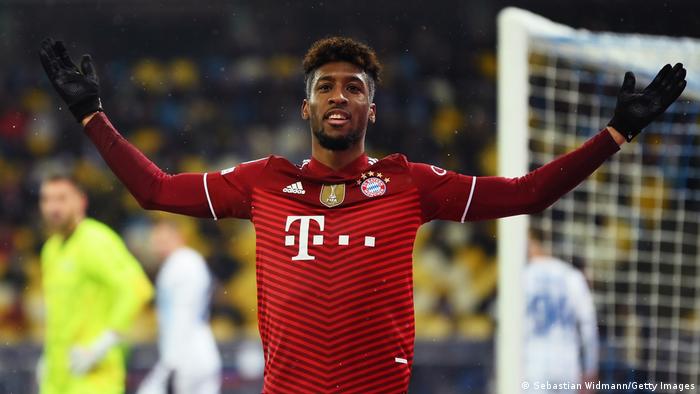 Kingsley Coman made a key contribution, scoring Bayern's second goal of the night

Up stepped Kingsley Coman. While the Frenchman can't compete with Lewandowski in his volume of goals, he has a penchant for scoring important ones. His accomplished strike here doubled Bayern's advantage and took the game away from the hosts before halftime, on a night when he strengthened his claim to a starting place ahead of Gnabry with his 12th career goal in the competition.

Bayern stagger over the line

Bayern were a little sloppy at times, though, especially at the back in the second half. Without the commanding figures of Süle and Upamecano, Bayern looked vulnerable as they conceded to Denys Harmash, whose goal invited a period of pressure. Leon Goretzka ended the game at center-back following an injury suffered by Tanguy Nianzou, but on a night when Bayern only needed a point to secure top spot, they did enough — but their reliance on their missing players was obvious.

In the end, victory was Bayern's and the night belonged to Lewandowski. He scored a remarkable 15 goals en route to the final in 2019/20, when Bayern eventually lifted the trophy and already has nine this season, having scored in all five games so far. Ronaldo still holds the record for the most goals in a single Champions League season — 16 scored in 2015/16.

Bayern will play another eight games if they are to reach the final again, plenty of time for this exceptional player to create yet more history.