A proposed law in Cambodia aims to clean up the streets of Phnom Penh, which also means that thousands of street vendors could be forced to shut down their businesses. Ate Hoekstra reports. 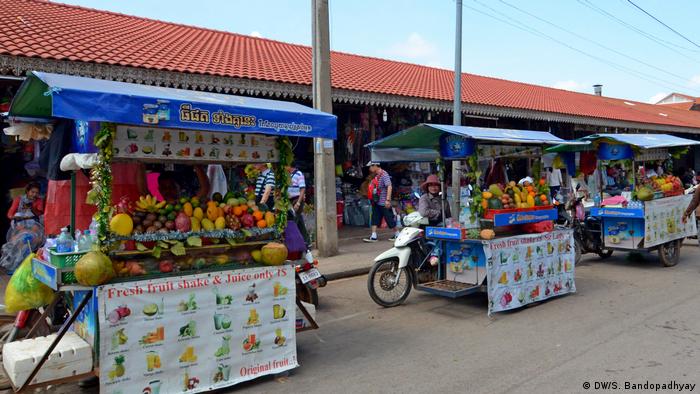 For almost 20 years, Lom Rithy has walked the streets of Phnom Penh with her cart, selling cold beverages to Cambodians. Although she doesn't earn much, it is enough for the 37-year-old to take care of her family.

According to the Independent Democracy of Informal Economy Association (IDEA), there are around 16,000 street vendors in Phnom Penh. But Cambodian authorities believe the street shops are causing disorder in the city. The government is now working on a law to make the city clean and orderly, which is likely to affect the vendors.

The proposal was slammed by Cambodian and international rights organizations. In a joint statement, the groups said the draft law "effectively criminalizes legitimate everyday activities of many within the Kingdom of Cambodia," adding that the proposed law "severely undermines human rights."

"We are concerned that the law would be used to harass street vendors," Keo Poeurn, a spokesman for IDEA, told DW. "The law will allow police to harass poor people and prevent them from doing business," he added.

"District officials often target us, so we have to be strong in order to survive," Kry told DW.

"People say the government doesn't want the city to look poor. But we don't have other means to earn money," she added.

Kry, a mother of two, opens her restaurant at 4 a.m. and closes it around 9 p.m. "We have to do this to survive. If they don't allow us to continue with this, we will starve to death."

The Cambodian government says it is necessary to "ensure public order management by maintaining order, aesthetic value, sanitation, cleanliness of the environment, quietness, social stability, preservation of national tradition, and the dignity of citizens."

People in Phnom Penh hope the draft law will not be approved.

"I understand that the government wants to have a clean and well-organized city, but where will we go if we are not allowed to run our businesses?" said Rithy.

Cambodia: A country sinks into rubbish

Ouk Kim Lek, the secretary of state at the Ministry of Interior, told the Phnom Penh Post newspaper that he hopes that all Cambodians will respect the proposed law.

But 65 national and international organizations urged the government in a joint statement to discard the draft law as it is "unacceptably vague" and too far-reaching.

Rights groups also criticize other aspects of the draft law - for instance, it prohibits people from "speaking loudly" in public and puts restrictions on what people should wear, with men not being allowed to go shirtless in public and women prohibited from going out in skimpy clothes. The latter proposal drew strong criticism in the country, with Cambodian women protesting against it by posting their pictures on social media in bathing suits and "revealing clothes."

"Reprimanding women for what they wear serves to reinforce the notion that women are to blame for the sexual violence they suffer, and thereby further entrenches the culture of impunity that exists in relation to gender-based violence in Cambodia," Ming Yu Hah, Amnesty International's Asia-Pacific deputy regional director,  said in a statement.