An obelisk with a refugee-friendly Bible verse could become a permanent fixture in Kassel after the Documenta art show. A right-wing German politician has protested, evoking Nazi vocabulary by called it "disfiguring." 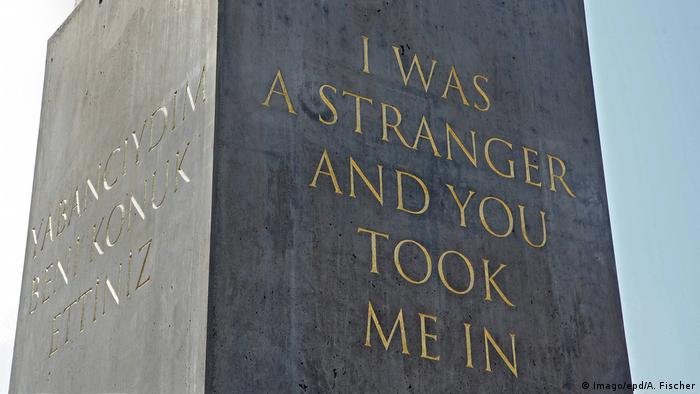 In a statement that has been likened to Nazi sentiment, a work of art featured at the Documenta contemporary art show has been called "disfiguring" by Kassel city council member Thomas Materner, who is also a member of Germany's growing far-right party AfD.

The work by Nigerian-born, US-based artist Olu Oguibe is an over 16-meter-tall obelisk that cites the Bible verse Matthew 25:35 - "I was a stranger and you took me in" -  in Turkish, Arabic, German and English.

Oguibe has said he created the work, which won him Documenta's Arnold Bolde Award, as a message to Evangelical Christians in the US who are critical of welcoming refugees.

The obelisk, dedicated to the estimated 60 million refugees all over the world, has been visible in downtown Kassel since the Documenta contemporary art show opened in the small central German town on June 10.

It is customary for Kassel to purchase permanent works of public art from each show, which takes place every five years. This week, the city's culture committee convened to discuss the possible purchase of Oguibe's obelisk.

Gernot Rönz from The Greens pointed out, according to the paper, that the terminology allegedly used by Materner ("entstellt" in German) was reminiscent of the Nazis' condemnation of so-called "entartete" or "degenerate" art that didn't conform to their racist ideology. Under the Nazi regime, countless works of art deemed unacceptable were destroyed or misappropriated from their rightful owners and sold abroad.

However, Materner later told regional news portal hessenschau.de that he had said "entstellend," meaning "disfiguring," rather than "entstellt" (disfigured). Nevertheless, the difference between the terms is slight in German.

Documenta responded to DW's inquiry by declining to comment at present.

Kassel's mayor, Christian Geselle, said he saw no legal or technical reasons for not keeping the obelisk in the city, though he added that the population would have to back the decision, according to the HNA.

The city's culture committee consists of 13 members, two of whom represent the far-right AfD party. A decision about which artworks will remain in Kassel after the Documenta ends will be made on September 5 - 12 days before the conclusion of the event.

Documenta, Germany's prestigious contemporary art event, wraps up 100 days in Athens, while continuing in Kassel. Here's how it impacted a city in which art isn't its biggest concern. (17.07.2017)