Documenta, Germany's prestigious contemporary art event, wraps up 100 days in Athens, while continuing in Kassel. Here's how it impacted a city in which art isn't its biggest concern. 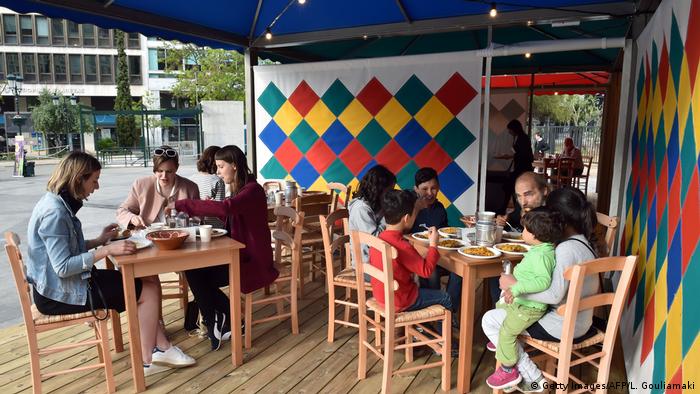 "Too bad that it won't be here anymore," says an older woman wearing a large grey ponytail. She's talking about the free food at the colorful pavilion on Athen's Kotzia Square.

The woman probably doesn't know that it's really an art project by Pakistani artist Rasheed Araeen (pictured above), although that may not matter to her. Along with other people in need, she is a regular at the tent. Poverty is widespread here in Athens.

You have to be pretty brash as a Documenta visitor to sit here and eat the food when there are many who need it more, comments one German guest. 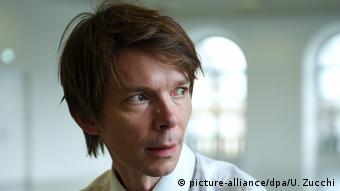 "Learning from Athens" is the motto of Documenta 14, which concluded its program in the Greek capital on July 16. The show of contemporary art continues in Kassel, Germany, through September 17.

But just before the Athens portion came to an end, it seemed that many still didn't know what "Learning from Athens" was supposed to mean.

Some had taken this motto too literally and expected a lesson, says curatorial consultant Marina Fokidis.

For her, a resident of Athens, the things learned by the Documenta teams in both Greece and Germany was particularly important. It was a process that began back in 2014 when artistic director Adam Szymczyk opened up dialogue with artists and institutions and discussed his ideas in Athens.

Some critics claimed this year's Documenta strategy would exoticize Athens; but Fokidis says the criticism as unfounded. "We didn't want 'poornography;' we didn't want to put the crisis or the German-Greek relationship on show," she says. Yet this impression was hard to shake off.

Art meshes with the location 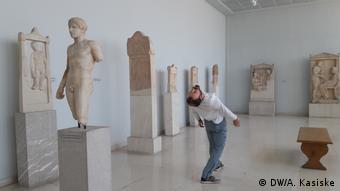 Antiquity met modern art in the Archaeological Museum of Piraeus

In Athens, more so than in Kassel, the art on show references either the current situation in the host city or its history. There is, for example, the old factory in southwestern Athens where the Nazis murdered 75 Greek members of the resistance that was turned into a venue for performance art and film projects by students from the neighborhood.

With direct ties to the city, the question of what will remain of the Documenta is all the more relevant.

For choreographer Kostas Tsioukas, it's clear that his experience with Documenta will continue. During the past three months, he danced three days a week in the Archaeological Museum of Piraeus, meditating on marble, gliding around pillars and interacting with the sculptures there.

His joint project with dancers and performers went over so well that the museum wants to continue their collaboration. This is very unusual in Athens, where antiquity is generally more revered than contemporary art.

'Documenta leaves behind a vacuum' Documenta drew over 300,000 visitors to the city's museum of contemporary art

Athens' admiration for the ancient past won't change so quickly, says Eleni Kountouri. She is the director of NEON, Greece's third-largest foundation for contemporary art, along with Onassis and Niarchos.

"Documenta leaves behind a huge vacuum," she says. The event, she adds, contributed to a kind of "Athens hype." She constantly receives requests from people looking for contact to Greek artists, gallery owners and local cultural projects, but she doubts that the interest will last.

Greece's ministry of culture doesn't have any more money and is simply ignorant when it comes to contemporary art, criticizes Kountouri.

A win for contemporary art

Nevertheless, the Documenta was hotly discussed on social media and in the press. "That's a good sign," according to Katerina Koskina, director of the National Museum for Contemporary Art (EMST).

She could be called the true "winner" of the Documenta. For the first time, she is able to present part of her collection - mainly Greek art from the 1950s to the present - to an international audience in Kassel. Due to lack of funding and structural problems, the collection could not yet be shown in the EMST. But after the Kassel show ends in September, it will finally go on display in Athens. 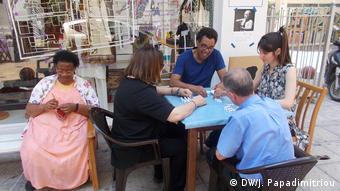 It's a win-win situation for Katerina Koskina, whose museum offered three floors to the Documenta exhibits. More than 300,000 visitors came to the EMST alone during the event. Documenta's marketing in the city, however, certainly didn't contribute to that success. Posters bearing the cryptic text "D14" - only distinguishable to insiders - weren't posted until shortly before the show.

By the end of the three-month event, even the taxi drivers had come to know about the art show - perhaps because it took place at 40 locations across the city, some of which were only accessible by taxi or bus.

One of the projects that can be continued after the show is a neighborhood initiative on Victoria Square. The area is known for drugs and crime and, up until last year, was also a first stop for newly arrived refugees.

American artist Rick Lowe rented a store there, which contained a kitchen, a couple of tables, chairs, board on the wall and pens - the basic equipment needed to create a neighborhood meeting place.

"Since then, the junkies that used to hang out here have left, which is good," says Marios Blido. Originally from Albania, he has lived in the neighborhood for 27 years and helped set up the store. In the meantime, a newspaper that prints portraits of store owners from Victoria Square and various classes for children have been organized on the square - and architecture students are collaborating on how to improve the neighborhood. 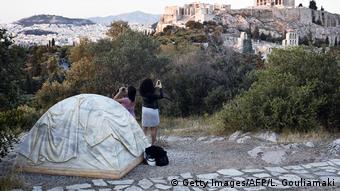 Rent for the store has been secured through April 2018, after which the meeting place will be continued with support from the city. A kiosk owner on the corner, who was also profiled in the newspaper, agrees that it's a great project, but says he is confused as to why a foreigner would initiate it - and what makes it art.

Documenta's double exhibition this year didn't just shake up the institution's own identity. It also broadened the discussion on what art is capable of - beyond the demands of the market.

"At the beginning, we thought about creating a building that would remain here in Athens," says curatorial consultant Marina Fokidis. What will remain, she continues, are the networks that are based on a currency other than the euro. "Even if that sounds a bit hippie, these networks are formed with hearts, not with money."

The northern German city of Kassel will get its fill of visitors when it opens Documenta on June 10. The world's most prestigious contemporary art show will show works from over 160 artists. (07.06.2017)