Retrieval of corpses turns spotlight on the Ganges | Asia| An in-depth look at news from across the continent | DW | 16.01.2015

More than 100 corpses have been recovered from India's Ganges River. While officials have ordered a probe, environmentalists urge the government to urgently tackle the issue of pollution in India's most sacred river. 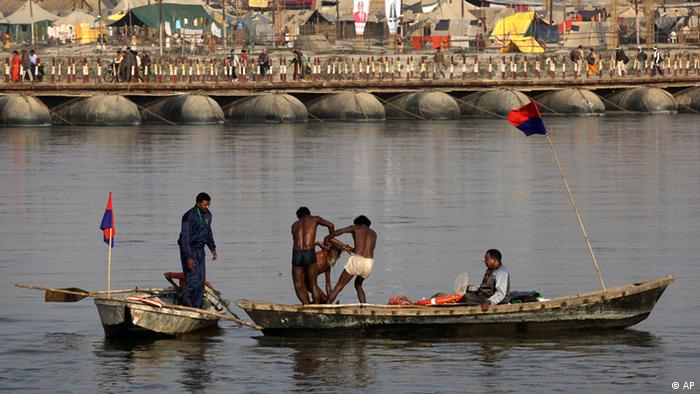 Initial reports suggest the bodies found floating in the Ganges River were of people who were simply dumped in the river or buried on its banks because their families could not afford proper cremation.

The Ganges, which is a lifeline to millions of people who live along the riverside, usually sees bodies floating downstream, however, it is the first time that so many bodies amassed at one place.The corpses were found earlier this week in the Unnao district of the northern Indian state of Uttar Pradesh

"The doctors have expressed their inability to conduct any examination given the putrid state of the bodies. It is not even possible to collect the DNA extracts. We have ordered a probe to find out how these bodies surfaced at one spot," Satish Ganesh, a senior police official, told DW.

Millions of Hindus bathe in the Ganges in a ritualistic act of spiritual purification and believe the river cleanses all sins and liberates them from the cycle of rebirth. They also release the dead bodies into the river hoping the deceased person's soul will be redeemed. 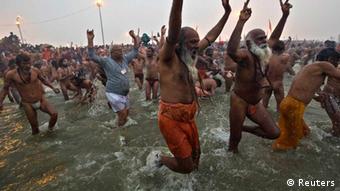 Millions of Hindus believe the Ganges can cleanse all their sins

The world's second most polluted river

The Ganges, which originates from the Gomukh glacier in the Himalayas, is the second most polluted river in the world after Indonesia's Citarum River. Over the years, the 2500-kilometer-long Ganges has been severely polluted by industrial waste, farm pesticides and sewage. Nearly 85 percent of the pollution found in the river comes from sewage, while nearly 500 million liters of untreated industrial waste are dumped into it on a daily basis.

In the 1980s, the Indian government announced a grand Ganga Action Plan - the most ambitious initiative ever taken in the world to clean up a river. But the project failed.

"It has gone from bad to worse. In the mid 1980s, there were 170 tanneries on the Ganges' banks, but now there are over 400 and they discharge toxic wastewater directly into the river and very little is treated," Rakesh Jaiswal, an environmentalist, told DW.

India's Kumbh Mela is the mother of all Hindu festivals, attracting millions of people to bathe at the holy confluence of the Ganges and Yamuna rivers in Allahbad. It's billed as the world's largest human gathering. (11.02.2013)

Sunita Narain, the Director General of the Centre for Science and Environment in New Delhi, pointed out that even in its cleaner stretches in the Himalayan state of Uttarakhand, the river's ecological flow has been reduced.

"Every river in the country is receiving sewage, and ever river is dying. The government should make ecological flow mandatory for the states and force them to protect the rivers," Narain told DW.

Prime Minister Narendra Modi has pledged to clean up the Ganges and set aside 338 million USD for this task. The PM has also appointed a cabinet minister to oversee the project. In addition, the government has set up an inter-ministerial group, which includes the ministries of power, environment, transport, and tourism, to deal with various aspects of the problem.

On Wednesday, January 14, the Indian Supreme Court took notice of the retrieval of the floating bodies and criticized the poor progress of the Ganga Action Plan. The court was informed that the work could be completed by 2018 and that 118 towns along the river had already been identified for the establishment of sewage treatment plants.