The 44-year-old has displayed his support before for the region's secession from Spain and was confirmed as one of the candidates for the pro-independence alliance. Elections will take place in September. 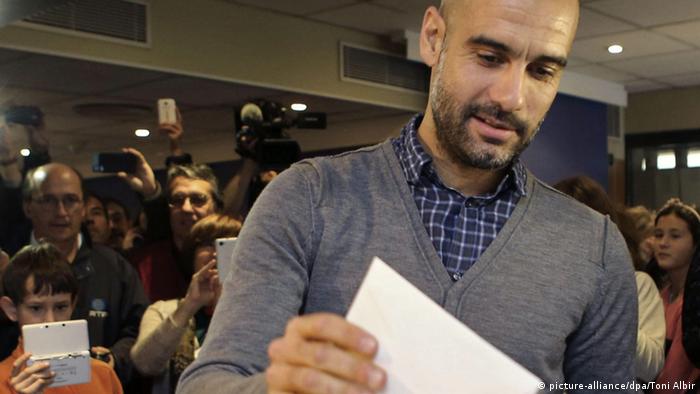 Bayern Munich coach Pep Guardiola will stand on the electoral list and back a move for an independence referendum for Catalonia, according to Spanish newspaper El Pais.

Guardiola, a former player and coach at Barcelona, has long backed the separatist movement for Catalan independence - a prospect which the Spanish government refuses to entertain.

The Bayern Munich coach voted in a non-binding independence vote in November where more than 80% of the electorate was in favor of secession from Spain.

As confirmed by MEP Ramon Tremosa on Twitter, Guardiola will stand as the last candidate on the electoral list for the pro-independence alliance, which plans to run in September's elections.

However, Guardiola doesn't want to be elected for the regional government in Barcelona and by being the last on the electoral list is simply highlighting the independence movement.

Laporta, who failed in his bid to return to power this weekend, ran the club from 2003-10 and reconnected Barcelona with success and its Catalan identity.

The 53-year-old promoted Guardiola to his first senior coaching position in 2008 at the Camp Nou and backs the current Bayern Munich boss to lead the club in the future.

"I've spoken to Pep Guardiola about him returning," he told Spanish radio station, Radio Marca. 'He's under contract with Bayern Munich, but he's a free spirit who will always be linked to the club. He could be a great president in the future."