Report: Pakistani accused of spying on German politician for Iran

A Pakistani man has been accused of spying for Iran on SPD politician Reinhold Robbe. Prosecutors have said the suspect was exploring targets for possible attacks against politicians in Germany with ties to Israel. 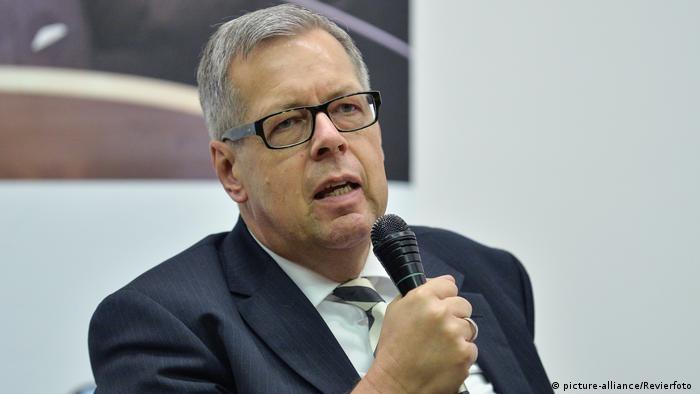 Man arrested in Germany on suspicion of spying for Turkey

German authorities in Hamburg arrested a Turkish man suspected of spying on Kurds living in Germany. Turkey has cracked down on suspected opponents, including Kurds, following an attempted coup. (16.12.2016)

Critics are calling for background checks to be beefed up. But Germany's domestic intelligence agency says that the checks are fine and that the discovery of an Islamist employee in its ranks was an anomaly. (30.11.2016)

A man suspected of belonging to the Turkish secret service who was arrested in Germany last week is believed to have planned two assassinations in Europe, a German media report says. The victims were eminent Kurds. (19.12.2016)

Robbe, who served as president of the German-Israeli Society (DIG) until 2015, was being eyed as a possible assassination target, according to information reviewed by German public broadcasters NDR and WDR, as well as the daily "Süddeutsche Zeitung."

According to the federal prosecutors' indictment, the suspected agent, named as Syed Mustufa H., compiled a thorough "movement profile" on Robbe and staked out the DIG offices in Berlin - signs authorities said were a clear indication of an assassination attempt.

The suspect paid particularly close attention to Robbe's public transportation travel habits and charted alternate routes that he took on the way to the DIG Berlin building.

Prosecutors said the suspect's actions were part of a broader operation to identify possible targets with friendly ties to Israel in Germany, France and other European countries, the reports said.

The Pakistani man is also accused of spying on a French-Israeli professor at a business school in Paris on behalf of Iranian intelligence. The suspect was previously detained by authorities in July 2016 under suspicion of espionage and was known to Germany's domestic intelligence agency (BfV). The Pakistani suspect is believed to have been spying for Iran since July 2015.

The exact motive for carrying out a possible attack on Robbe is still unclear. However, security agencies speculate that the Iranian government could have been preparing a retaliatory move against people closely linked to Israel should Israel carry out airstrikes against Iranian nuclear power plants.

Despite his extensive observation of Robbe, files confiscated from Syed Mustafa H. indicate that some of his methods were those of an amateur.

When giving information on Robbe to his contacts in Iran, the suspect reportedly sent PowerPoint presentations that incorrectly communicated biographical details on his target.

The suspected agent officially studied engineering in Bremen and also worked at the German Aerospace Center (DLR) in the northern German city, the reports said.

It is the first known case of a German politician being the target of an espionage operation by the Iranian intelligence agency, the reports said.