Report: Majority of crimes against refugees unsolved | Germany | News and in-depth reporting from Berlin and beyond | DW | 31.03.2016

A new investigative report has revealed that the majority of attacks on refugees or refugee homes in Germany in 2014 remain unsolved. The police said the figures are unsurprising. 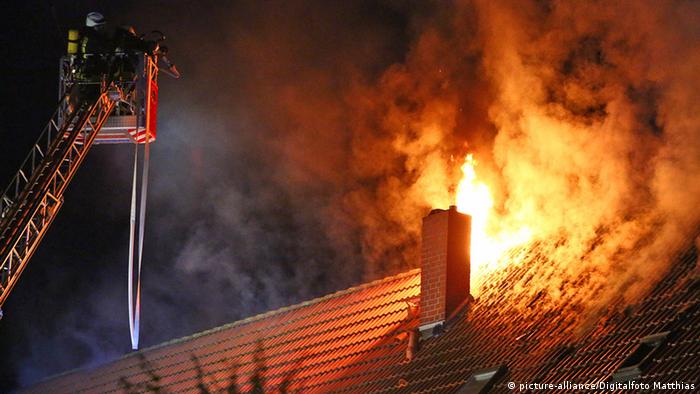 German police and prosecutors are struggling to solve crimes against refugees, a new investigative report has found. Reporters from the journalist collective "Correctiv" and "Der Spiegel" magazine examined the 199 crimes against refugees officially reported in 2014, and found only 15 convictions from the 157 they were able to draw conclusions from.

"Even when police were able to name suspects to state prosecutors, the case would usually be closed - because liability could not be proven," the report said.

The statistics for 2015 are likely to be starker, since the number of crimes reported last year increased fivefold in the past year as the influx of refugees mushroomed, but the report said it concentrated on the 2014 figures to allow time for the investigations to run their course.

The crimes included incitement to racial hatred, assault, bodily injury, and property damage - usually meaning racist or Nazi graffiti, or even arson attacks on planned refugee homes. There was also one conviction for attempted murder - when Molotov cocktails were thrown at a home in which refugees were sleeping in the eastern state of Mecklenburg Western-Pomerania. The perpetrators received a five-year prison sentence. 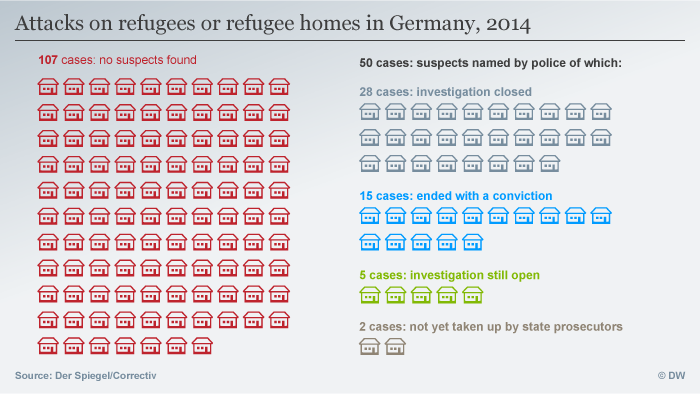 No witnesses, no suspects

Of the 157 crimes they were able to assess, the reporters found that in only 50 cases could the police identify a suspect for state prosecutors to investigate. In 24 of these cases, prosecutors closed the investigation because no witnesses or other evidence could be found, while four other investigations were closed because the suspect was already being prosecuted for another crime.

The police, for their part, said the figures were hardly shocking. "Property damage is of course very difficult to resolve," said Stefan Redlich, spokesman for the Berlin police. "There is hardly ever any evidence."

Wolfgang Beus, spokesman for police matters in North Rhine-Westphalia's Interior Ministry, was equally unsurprised by the investigation. "The vast majority of these crimes are what we call propaganda crimes," he told DW. "Swastika graffiti, or racist slogans. If you have some graffiti on the facade of a building, a refugee home, and you don't have any witnesses - you have virtually no chance of resolving a crime like that. Murders, meanwhile, have a resolution rate of over 90 percent." 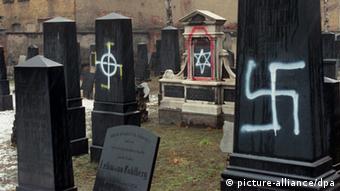 Swastika smeared on a gravestone at a Jewish cemetery in Leipzig

"We try to identify every single perpetrator, that's our goal," underlined Beus. "A policeman is never happy when he can't name a suspect. But we take every single one of these cases seriously - that means that when someone comes to us and says a swastika has been drawn on the wall there, then the police will take that seriously and will investigate it. But the chances for those crimes just aren't good."

Police forces around the country registered a massive increase in crimes against refugees from 2014 to 2015 - in some places more than others: according to Reus, North Rhine-Westphalia saw an eight-fold increase. In Berlin, Redlich said, the number iof cases ncreased from 39 to 58, or nearly 50 percent.

These nine included assault charges, and, Redlich added, the majority were far-right motivated. "Either the perpetrators shout a far-right slogan, or they're known to be from far-right circles," he told DW.

Meanwhile, "Correctiv" reported that in Germany as a whole there was almost a five-fold increase - with a larger percentage being arson attacks (3.5 percent in 2014 up to 9 percent).

Two fires at refugee homes in German state of Thuringia

Two fires broke out in the eastern state of Thuringia over the weekend, one in a refugee home, the other in a designated shelter. No one was hurt. Police say at least one of the fires could have been arson. (04.10.2015)