Report: German police told not to take refugees to Turkey

German patrol boats stationed in the Aegean Sea have reportedly been instructed not to send refugees picked up at sea back to Turkey. The order was given after officials in Merkel’s governing coalition raised concerns. 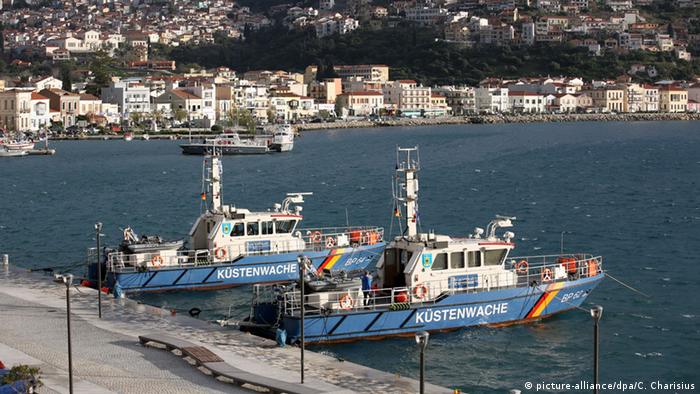 The two German vessels working under EU border agency Frontex were instead told to hand any migrants intercepted in the Aegean Sea over to Greek authorities on the mainland, news magazine "Der Spiegel" reported Saturday.

The notice, seen by Spiegel, was sent to the police boats "Uckermark" and "Börde." The ships were deployed to the island of Samos in March to help the Greek Coast Guard manage huge numbers of people seeking to reach Europe via a sea route from Turkey.

According to the Spiegel report, the order came after "legal concerns" were raised by members of the German federal government. It said the issue had been hotly debated at an operational level by Chancellor Angela Merkel's coalition government. It also said the Chancellery had recently submitted a report concluding that returning refugees to Turkey was legally viable.

But experts have voiced objections to any such plan. They say sending refugees from Greece, or even from Greek waters, back to Turkey could be considered unlawful because it may deny migrants the right to proper asylum procedures.

More than a million refugees have reached Europe over the past year, many of them risking their lives by making the dangerous journey from Turkey to Greece on flimsy smugglers' boats. So far this year, about 132,000 people have made the trip across the Aegean.

Greece has already deported dozens of people deemed economic migrants back to Turkey, and soon it might be sending more. EU leaders are preparing to strike a deal with Ankara that would see Turkey take back all illegal migrants - including Syrians who would qualify as refugees.

The EU says that if Turkey can be considered a "safe third country," then the plan is legal. In this case, EU rules allow governments to reject asylum applications of those who have traveled through such a "safe" country.

The United Nations human rights chief has denounced what he calls a 'race to repel' migrants and refugees by some European governments. It comes as the EU and Turkey flesh out a deal aimed to halt irregular migration. (10.03.2016)