German press and local governments have reported that violent acts targeting asylum-seeker housing increased by five times last year. The news came on the heels of a grenade attack in the south of the country. 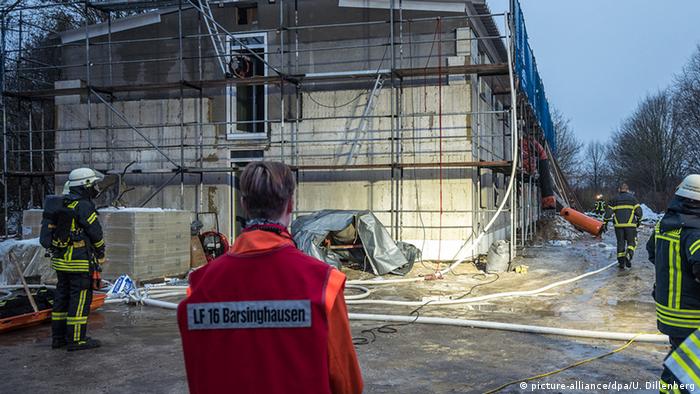 Attacks on refugee housing increased by a factor of five in 2015 compared to 2014, German media reported on Friday. According to public broadcasters WDR and ARD, there were more than 1,000 attacks on accommodations for asylum seekers, running the gamut from arson to offensive graffiti.

The state of North Rhine-Westphalia, home to the most refugees, was also drastically in front of the 15 other states in terms of attacks, jumping from 25 incidents in 2014 to 214 last year. Lower Saxony ranked second in attacks and saw 89 acts of violence in 2015.

"There is no way to know if these crimes are being planned on the spot or interregionally," WDR quoted North Rhine-Westphalia's Interior Minister Ralf Jäger as saying.

The journalists' research found that most of the perpetrators come from the areas where the refugee housing is located and are not connected to any nationwide network of right-wing extremists.

Of the exactly 1,005 registered attacks, the authorities estimate that 901 were motivated by far-right ideology. 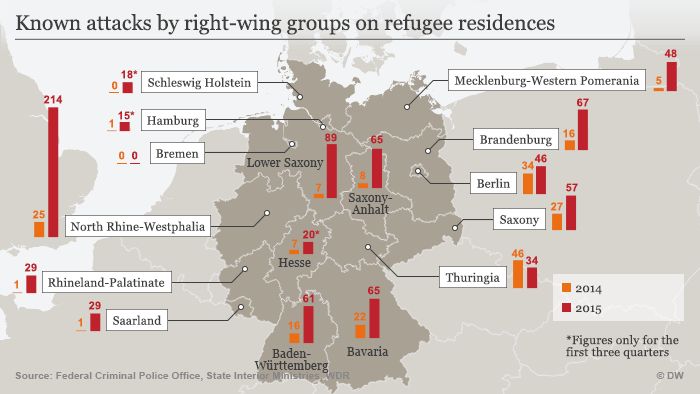 The broadcaster gave one particularly grave example of a 25-year-old man in the town of Altena in North Rhine-Westphalia. The one-time fireman disabled the fire alarm of a home for asylum seekers, crawled onto the roof and using knowledge from his job, set fire to the building, where seven Syrian refugees were staying. They were alerted to the blaze only when passing visitors, originally looking to welcome the new arrivals, saw the fire and warned those inside.

When the man was arrested, according to WDR, his only defense was that he was afraid of the refugees. 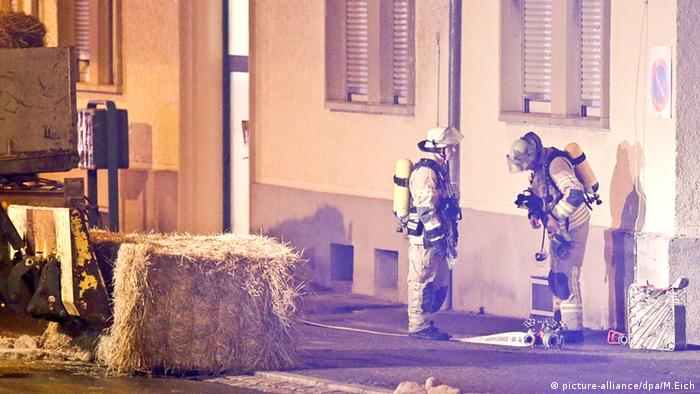 Friday also saw one of the more sinister attacks that Germany has experienced thus far. An assailant threw a hand grenade at the initial arrival center in the Black Forest town of Villingen-Schwenningen in the southwestern state of Baden-Württemberg. The attack, which occurred at 1:30 a.m. local time (0030 GMT/UTC), did not end in injury as the grenade failed to explode. The police immediately cordoned off the area and began to search for suspects and to diffuse the explosive.

German Interior Minister Thomas de Maiziere blasted the attack as "unacceptable" and "cowardly" on the German news channel N24. He called for a swift probe to bring the perpetrators to justice, while Justice Minister Heiko Maas said he would call a meeting of his counterparts in all of Germany's 16 states in March to discuss a stronger crackdown on far-right crimes.

It is likely, however, that the attacker will disappear into the ether. According to the WDR report, only one-fourth of attacks on refugee homes - whether they be a swastika spray-painted outside the door, property damage, or more violent acts - end in an arrest and the crime being solved in courts.

Unhappy with her government's refugee policy, four of 10 Germans want Chancellor Merkel to resign, a new poll has shown. The news came just after the ruling grand coalition unveiled its new asylum package. (29.01.2016)