Ethnic killing of civilians by both government forces and rebels is "widespread" in South Sudan, according to a human rights group. The news comes after confirmation Uganda has troops fighting in the conflict. 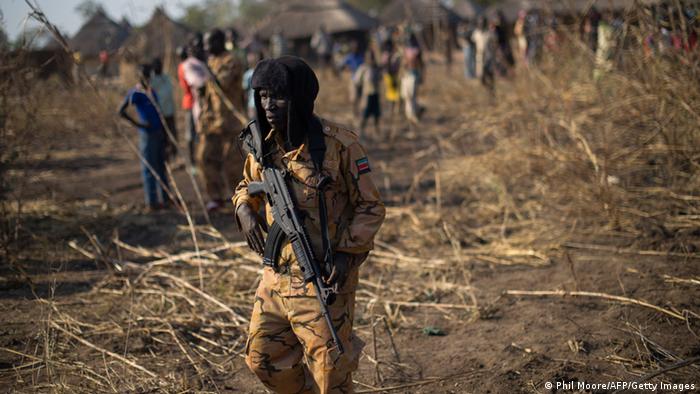 The United Nations believes that about 10,000 people have been killed in fighting between troops loyal to South Sudan President Salva Kiir and a loose coalition of rebel factions largely headed by former vice president Riek Machar.

The two are members of rival tribes, and the Human Rights Watch (HRW) organization believes many of the dead are innocent civilians victims of ethnic killings.

An HRW report released on Thursday included information gleaned from interviews with more than 200 victims and witnesses to abuses in the capital of Juba and the town of Bor, where fighting has been fierce.

"Appalling crimes have been committed against civilians for no other reason than their ethnicity," Daniel Bekele, Africa director at HRW, said in a statement.

"Both sides need to leave civilians out of their conflict, let aid groups reach people who need help and accept a credible, independent investigation into these crimes."

According to the report, there have been "widespread killings of Nuer [the tribe Machar belongs to] men by members of South Sudanese armed forces in Juba," including the massacre of more than 200 men on December 16. They allegedly died after they were gathered together in a police building and shot at through the windows.

"Researchers also documented the targeting and killing of civilians of Dinka ethnicity by opposition forces in other parts of the country," the report said, adding that "many of the crimes committed are serious violations of international humanitarian law and may constitute war crimes or crimes against humanity."

HRW urged the UN to impose an asset freeze and travel ban on anyone in South Sudan linked to the atrocities. They also said UN peacekeepers deployed in the country needed to accelerate the arrival of reinforcements, and take "urgent steps to improve the protection of civilians, including better security around UNMISS compounds sheltering some 66,500 civilians displaced by conflict."

Late on Wednesday, Uganda President Yoweri Museveni confirmed he had sent troops to fight alongside those of South Sudan's government. The role of Ugandan soldiers deployed on December 15 was previously unconfirmed. Museveni also revealed the Sudan People's Liberation Army (SPLA) had joined the fight.

"The SPLA and elements of our army had a big battle with these rebel troops at a point about 90 km (55 miles) from Juba, where we inflicted a big defeat on them," Museveni said, speaking in at a summit meeting in Angola late Wednesday.

"Unfortunately, many lives were lost on the side of the rebels. We also took casualties and also had some dead."

Uganda is a key member of the Intergovernmental Authority on Development (IGAD) - the East African bloc attempting to broker a cease fire between the government and the rebels, who have been engaged in fighting since the alleged attempted coup in December.

Three DW Akademie employees were recently evacuated from South Sudan due to heavy fighting. Extensive Deutsche Welle projects have been contributing to the country's media development. (15.01.2014)