South Sudan's rebels without a cause?

The fighting in South Sudan has already left over 1,000 people dead and displaced thousands. What the rebels hope to attain still remains unclear - perhaps even to the rebels themselves, some observers say. 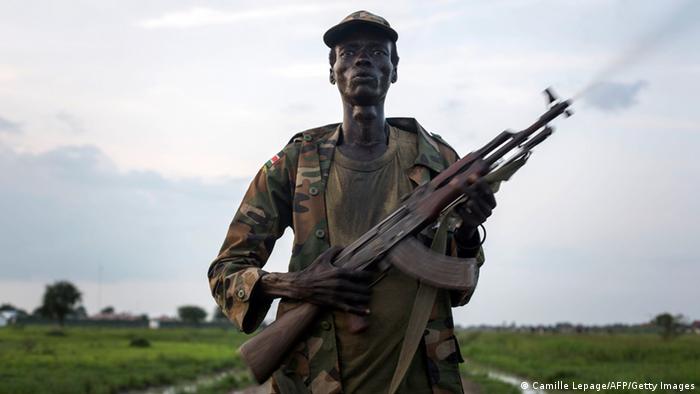 For over a week, representatives of South Sudan's President Salva Kiir and his former deputy Riek Machar, who is now leading the rebels, have been negotiating in the Ethiopian capital Addis Ababa. "It's a good thing and it's important," said Wolf-Christian Paes, an expert on Sudan at the Bonn-based International Center for Conversion (BICC). However, the talks are only about a short-term cease-fire. According to Paes, none of the factions had yet begun to even contemplate how to resolve the actual conflict.

Who controls the rebels?

One of the problems that observers like Paes see is that the disparate group of warlords and officials of the ruling SPLM who supported Riek Machar have not formulated any clear-cut objectives. Although they have brought large swathes of the country under their control, the rebels do not seem to have any discernible hierarchies. 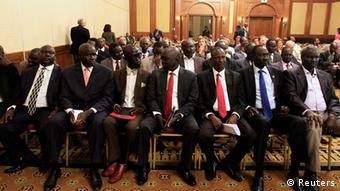 The South Sudanese delegation attending the talks in Addis Ababa

Even Machar's position of leadership among the rebels is not firmly established. "At the moment there is no one else saying, 'No, I'm the one who speaks for the rebels,'" Paes points out. "So that seems to be accepted."

According to Magdi al-Gizouli, an expert on Sudan at the Kenyan Rift Valley Institute, Machar is using the current talks to underpin his claim to leadership. "He's interested in claiming a national platform," al-Gizouli said.

Getting high-profile politicians like the ones in detention released would "give the sort of insurgency that he has been leading much greater political weight than it has now."

At this point it is also not clear who exactly belongs to Machar's camp.

Several powerful warlords have openly joined the rebellion. Whether other politicians in the capital, Juba, such as Rebecca Garang, the widow of former SPLM leader John Garang, supported the rebels remained unclear, Sudan expert Paes said. "There aren't just the two camps – that of Salva Kiir and the Riek Machar camp," he pointed out. Rebecca Garang was being backed by at least part of the old Garang camp - people who were unhappy with some of the president's policies. 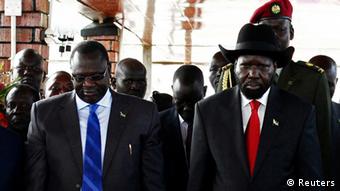 For these two groups which form the current opposition – the warlords surrounding Machar and the politicians from the capital, including the detainees – to develop a common position for future negotiations with the government would be difficult, Magdi al-Gizouli said. "If negotiations do continue, we might begin to see differences between these two sides, because their logic is different."

Renewed criticism of the president

Before the fighting in December escalated, Machar and Rebecca Garang had sharply criticized President Salva Kiir for his autocratic leadership style and the corruption within the government. "There is no doubt that the president has led the South Sudanese government in a decidedly authoritarian manner and that of course there is rampant corruption," Paes said.

But both Machar and Rebecca Garang had themselves been part of the system for years. "This begs the question why it has just occurred to them now," Paes said. One might assume that the allies of the rebels were more interested in their own power than political issues. 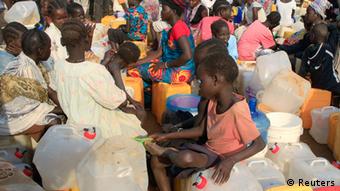 South Sudan has seen bloody rebellions motivated by power struggles in the past. Local commanders had "taken to the bush" before and fought the government until they were offered influential positions, Paes explained.

The current insurrection could be interpreted as the rebellion of dissatisfied warlords, but on a larger scale. Since Machar had already been vice president and commanded considerable power, it was unclear what he stood to gain beyond what he had attained already. "Of course, he would not get the presidency," Paes thinks. For reasons of ethnic balance, among others, this was highly unlikely. That is because Machar belongs to the Nuer ethnic minority, whereas President Salva Kiir comes from the Dinka majority.

The United Nations says it's working "as quickly as possible" to deploy 5,500 extra UN peacekeepers to protect civilians in South Sudan where fighting is focused on the oil hub of Bentiu and the Nile river town of Bor. (10.01.2014)

Mediators from around the world have joined the search for a solution to the crisis in South Sudan. DW examines their motives. (07.01.2014)

South Sudan and its northern neighbor, Sudan, have discussed plans to secure oil fields amid a slow start to peace talks. South Sudan's government and rebel forces have been fighting for the past three weeks. (06.01.2014)