Uganda sends troops into South Sudan | World | Breaking news and perspectives from around the globe | DW | 11.01.2014

The Ugandan government has announced that its army has marched into South Sudan. Even though the move is to protect its own security and economic interests, the step represents a risk for the entire region. 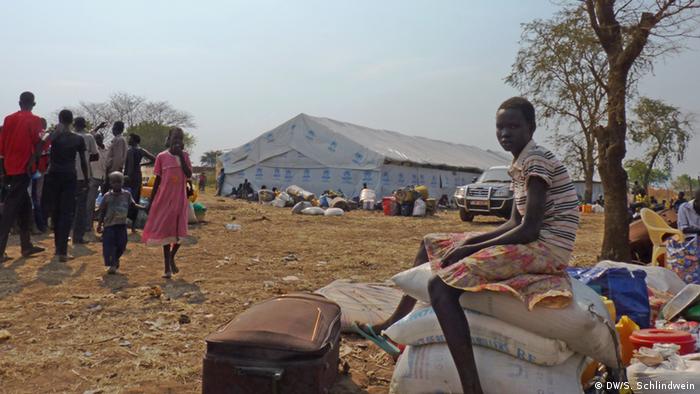 Dozens of trucks usually line up along the Elugu River, which runs along the border between Uganda and South Sudan. In the small border town of Nimule, the ordinary hustle and bustle of everyday life typically dominates. Ugandan merchants and truck drivers relax in bars, waiting until their customs paperwork is cleared.

But the situation in Nimule changed about three weeks ago. The merchants have disappeared and the truck drivers no longer transport goods. Instead, they are shuttling refugees and military equipment back and forth across the border.

Trucks loaded with battle tanks inch forward. The route from Uganda's capital, Kampala, to the border town of Nimule has only just been paved. The convoys of tanks and containers holding military equipment have been on the road for days now in order to reach the South Sudan border.

So far, the Ugandan government says it has only sent troops to help evacuate several thousand Ugandan citizens from South Sudan. But here at the border, no one quite believes that. There are rumors that Ugandan fighter planes had bombed rebel strongholds. Kampala's version of that story is that Ugandan special forces are securing strategic points, such as the airport and the presidential palace in South Sudan's capital, Juba.

But on Friday (10.01.2014), the Ugandan government officially confirmed the large-scale deployment of its troops in South Sudan to "guarantee the peaceful course of negotiations," as a government spokesman said. 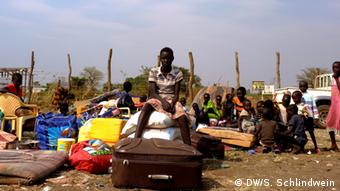 Every day, thousands of refugees from South Sudan have been taking the opposite route, crossing the river that runs along South Sudan's border to Uganda. Most of them have been walking for days.

One of them is Philip Akau, a 19-year-old refugee from the city of Bor. He also says he saw Ugandan soldiers in South Sudan: "There were many trucks passing with Ugandan soldiers. I don't know where they were going."

Securing the trade route to Juba might be one of the Ugandan government's main concerns. For the Ugandan economy South Sudan is the largest market beyond its own borders. Almost every tomato, potato, bean and egg that is consumed in South Sudan comes from Uganda.

The Ugandan government earns over 2 million dollars (1.4 million euros) in tax revenue from exports to South Sudan every day. An estimated 20,000 Ugandan migrant workers work in Juba and send money home regularly. The Ugandan elite has invested in real estate and businesses in Juba.

Uganda has long been considered the "big brother" of its young neighboring country. President Yoweri Museveni actively supported the war of independence that South Sudan fought against the Sudanese government in Khartoum, even providing military assistance.

As a reward for backing its partner, Uganda gained lucrative access to markets in South Sudan when it became an independent state in 2011. But those economic ties are now in jeopardy as a result of the emerging civil war. And Uganda's security is also in danger - at least that is what the government fears. 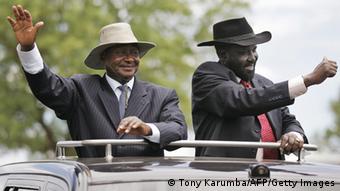 Officially, over 23.000 refugees have fled to Uganda so far. In reality the number is probably four or five times the official figure. Most of the refugees have sought shelter with relatives and are not registered in the country.

Ibrahim Ratib from Uganda's refugee agency explains that the Ugandan police are trying as best they can to monitor the refugees' baggage. "Our fear is that these people are currently coming with military items, which is threatening the current situation here - especially things like ammunition, and other military items like uniforms," he says.

According to Ratib, the conflict doesn't pose a military threat to Uganda yet because the brunt of the fighting is still taking place in the north of South Sudan, far from the border: "The conflict is still a long way away, it's not near here," he said.

The South Sudanese rebel leader Riek Machar has already threatened Ugandan President Yoweri with retribution if he interferes directly in the ongoing conflict - which he has now done, which is why Uganda's intervention in South Sudan could become a security risk for the entire region.

South Sudan's rebels without a cause?

The fighting in South Sudan has already left over 1,000 people dead and displaced thousands. What the rebels hope to attain still remains unclear - perhaps even to the rebels themselves, some observers say. (10.01.2014)

The United Nations says it's working "as quickly as possible" to deploy 5,500 extra UN peacekeepers to protect civilians in South Sudan where fighting is focused on the oil hub of Bentiu and the Nile river town of Bor. (10.01.2014)

Mediators from around the world have joined the search for a solution to the crisis in South Sudan. DW examines their motives. (07.01.2014)

Sudan's President Omar al-Bashir arrived in South Sudan's capital Juba on Monday (06.01.14) for a day of talks on the country's three-week-old unrest, as peace negotiations got underway in neighbouring Ethiopia. (06.01.2014)

As the yearlong civil war in Ethiopia's Tigray region escalates, Kenya and South Sudan are on high alert.