The first leg of the relegation playoff between Werder Bremen and Heidenheim certainly wasn't a classic for the neutral fan. But it did set up a nail biter and the chance of a sensation in the return match. 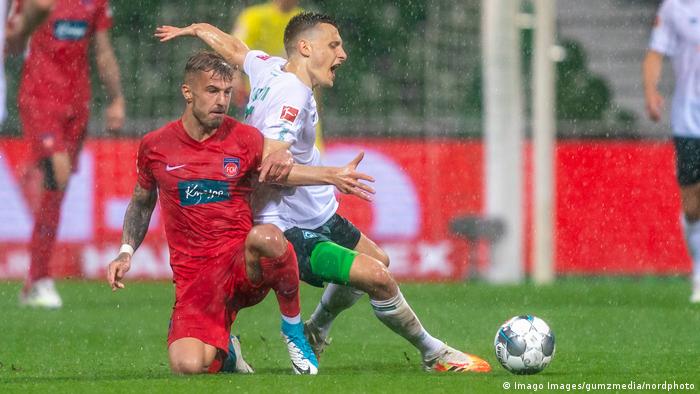 Due to its nature, the inter-division relegation/promotion playoff between the third worst Bundesliga team and the third best second division side has always been a mismatch — even if the second-tier side featured in the top flight a year or two earlier.

Since the playoff was reintroduced in 2008-2009, a second division club has won promotion via this route on just two occasions. The odds seem even more lopsided when you look at a team like Heidenheim.

For they are one of those teams that, until last weekend, was largely unknown to the average Bundesliga fan. Some probably have had to consult their mapping apps to find out exactly where Heidenheim is. And like every other time a team of unknowns makes it into the late rounds of the German Cup or into the relegation playoff, a couple of figures rise to national prominence – at least temporarily.

Since Heidenheim stumbled into the playoff despite a 3-0 defeat to Bielefeld on the last day of the Bundesliga 2 season, coach Frank Schmidt and veteran captain Marc Schnatterer, both key to the club's rise from the regional fifth division, have gotten their day in the sun..

For Schmidt, currently the longest-serving coach in German professional football, Thursday night's first leg of this year's relegation playoff had to be his biggest game in his 13 years with the club. The man who took over Heidenheim as an interim solution while they were still in the fifth tier, approached the first game with the attitude of trying to make the impossible, possible.

"We need a result in Bremen that will allow us to continue to believe in a sensation in the second leg," Schmidt said in the leadup to Thursday's game. "Werder will be pushing to ensure that the playoff is decided in Bremen. We will do everything we can to ensure that it is decided in Heidenheim."

It was by no means pretty, but Schmidt got the result he was looking for. Following a scrappy scoreless draw in which Werder dominated possession (67%) but created precious little in the way of scoring chances, this relegation playoff will indeed be decided in Heidenheim on Monday, one way or the other.

"I congratulated my players for a very disciplined performance from the first until the very last second and I think in the end we even created a few more chances than Werder Bremen today," Schmidt told streaming service DAZN following the match.

In fact Heidenheim's best chance came two minutes into injury time. The 34-year-old captain Schnatterer, a set pieces specialist, delivered a beautiful corner into the box, finding Timo Beermann. Unfortunately for the visitors, though, it was no fairy-tale finish for Schnatterer, as Beermann's header sailed just wide of the left post of the Bremen goal.

Werder's best chance had come just a couple of minutes earlier, when Heidenheim goalkeeper Kevin Müller let the wet ball slip out of his hands, handing a golden opportunity to Leonardo Bittencourt, but defender Marnon Busch was there to block it on the line. 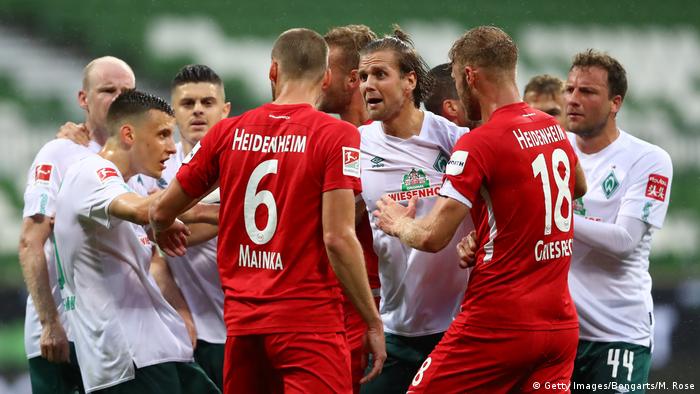 The first leg of the playoff was hard fought, with emotions occasionally threatening to get the better of some

The performance represented a big bounce back for Heidenheim after that embarrassing defeat in Bielefeld. Now they've earned the right to hope for a "sensation" during the second leg in Voith Arena on Monday.

"We've been unbeaten at home for the last few games," Schmidt said. "We need to find the right game plan [in the second leg] and we'll see what happens."

What a different story it is for his Bremen counterpart, Florian Kohfeldt, though. Coming off their 6-1 win over Cologne on the Bundesliga's final matchday that gave them the opportunity to save what has been a disastrous season, you had to think they would have been able to create more up front.

Kohfeldt conceded after the game that his team had failed to implement his game plan and to create much of anything in terms of offense.

"It was a very bad match by us," Kohfeldt told DAZN. "The only advantage that we have is that it is halftime, there are two matches. Heidenheim didn't score an away goal and we just have to see to it that we score on in Heidenheim. Then things will look completely different."

However, Bremen will have to do without their captain, Niklas Moisander, in Heidenheim. He was sent off a, meaning he will not be available on Monday.

And while you can be sure Bremen will do everything they can to seize this final opportunity to save their season – Heidenheim will be going after the kind of chance you may only get once in a lifetime. If they take it, Frank Schmidt and his team will remain on the national stage – for no less than 34 matchdays next season.