Refugees pour into Turkey amid Middle East chaos | Middle East | News and analysis of events in the Arab world | DW | 29.08.2014

With civil war raging in Syria and IS-terrorists rampaging through Iraq, Turkey is struggling with a flood of refugees. Many have been integrated, but Turkish resentment is growing and many challenges remain. 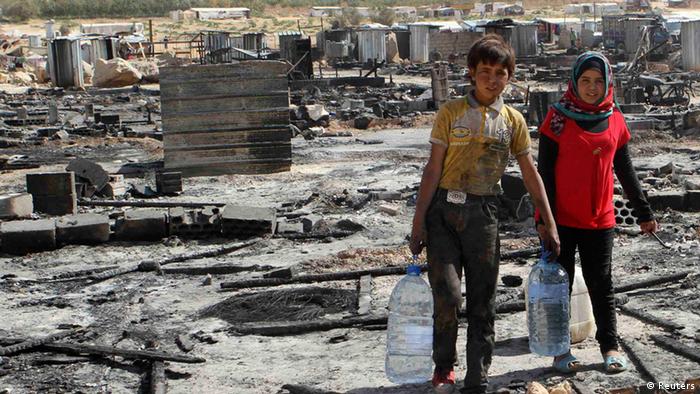 Yousef arrived in Istanbul with his two friends a few weeks ago. His left eye was injured by a grenade fragment in the Syrian civil war. For eight months the three lived in a Syrian refugee camp in the eastern Turkish city of Urfa. They then moved on further west. "Who knows how long this war will last? We cannot live in camps for the next 10 years," the 20-year-old told DW.

Here in Istanbul the three men now sit on the street—without work and without food—but they are hopping for prompt medical attention for Yousef's eye. But because they are new in the city, they don't know where to find it. For the time being, the three have no other choice but to beg. "It is very difficult to find a job in Istanbul. Additionally you earn very little money," Yousef said.

Turkey as the only chance

Unlike Yousef, 22-year-old Ahmad has fared better. He fled the Syrian civil war almost a year ago. He works as an assistant in an electronics shop, admittedly without a work or residence permit. But no one seems to mind. 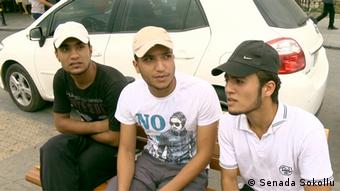 He received financing for a university preparation course from the Turkish government together with Turkish NGOs and Arabic countries. Once he completes it, he can apply to every university in the country. Through this, Turkey offers refugees a real chance. "Turkey is the best option for us, better than the other countries. The Arabic countries offer us no help. If they do, they accept only the Syrians who have the valid passport of the Syrian government. But most Syrians don't have these official documents any more," Ahmad told DW.

Ahmad as well as Yousef represent typical examples of the situation of Syrian refugees find themselves in in Turkey. One the one hand, the Turkish government wants to help. The integration of Syrian refugees is progressing with remarkably little bureaucracy. Already over 30,000 Syrians were able to complete vocational training. 70,000 children and adolescents were cared for in nursery schools and regular schools. On the other hand, Turkey is increasingly overburdened. Nearly 200,000 Syrians live in Istanbul alone, and more and more on the street.

Because of the many Arabic-speaking immigrants, the cityscape of the metropolis on the Bosporus is changing dramatically. Advertisements are increasingly seen in Arabic. A big problem for the Turks is competition for jobs. Illegal Syrian workers are putting pressure on the already weak Turkish job market. Syrians work as waiters, tailors, barbers as well as in the tourism industry because of their Arabic knowledge. They are supposed to attract the growing number of Arabic tourists. According to Turkish media, around 250 Syrian refugees work as waiters in Istanbuls Ortaköy district alone. 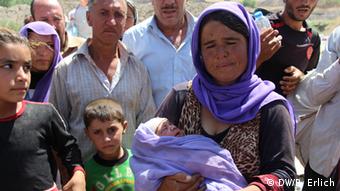 Not only Syrians, but Yazidis from northern Iraq are seeking refuge in Turkey

However the growing number of Syrians in Turkey leads also to a worsening of living conditions for the refugees. Prejudices are spreading in the Turkish people and their hostility is increasing. More and more, there are demonstrations against the Syrian refugees or Syrian facilities are destroyed. The demand is clear: The Syrians are supposed to either remain in the camps or go back to their home country. "We feel like tourists in our own country,” said one Turk, who did not wish to be identified told DW. “In some quarters there are currently more Syrians than Turks," a Turkish vegetable vendor added. "It is admittedly not a bad thing, but there are now so many. The country simply cannot bear it any more," he said.

Prejudices abound. A Turk assumes the Syrians just want to make quick money in Turkey. "They should shove off to the EU. They are unreliable. They are exploiting our county," he said. "The Syrians have occupied the best streets in Istanbul. How much longer do we have to live with this terrible situation?" wrote one user on Twitter. The Turkish government has recognized the growing tensions between their own people and the refugees and is now undertaking drastic measures. According to Turkish media reports, Istanbul mayor Huseyin Avni Mutlu announced he was sending thousands of Syrian refugees by mini bus out of Istanbul to camps in the east. 500 Syrians supposedly have been sent out of the city in the last month.

Due to the conflict taking place on Turkey's eastern border, the flood of refugees is increasing. The Syrians alone are no longer the only concern for the country. The Yazidis are fleeing from the IS-terrorists in northern Iraq and into Turkey According to the Turkish Disaster and Emergency Management Presidency, over 2000 Yazidis have taken refuge in Turkey. In Iraq, a refugee camp near the Turkish border will now be built. It should be able to accommodate 16,000 refugees, the Turkish newspaper Hürriyet reported.

Meanwhile, Yousef is trying to find help outside of Turkey. Together with his two friends, he sent a letter to the United Nations. He bemoans the famine and inhumane conditions for Syrian refugees on the streets of Istanbul. He needs help, and prospects.

The United Nations has released new figures on the death toll inflicted by the Syrian civil war. While the report includes previously unavailable information, the UN warns that the actual death toll is probably higher. (22.08.2014)