For migrants coming to Europe, the arduous trek does not end after they put foot on European soil. As new border controls are introduced, each frontier is another hurdle to cross, as Alison Langley reports from Slovenia. 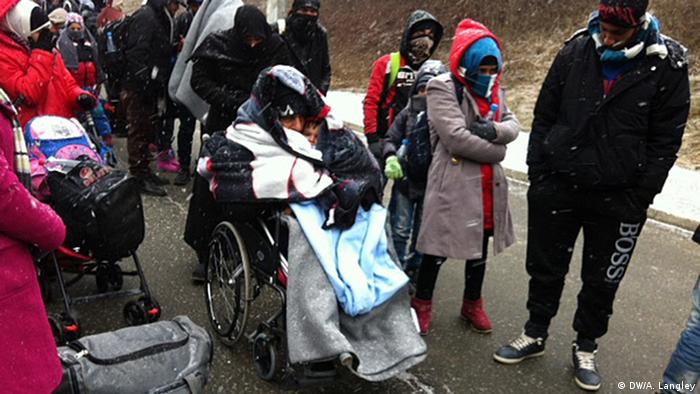 A battered train painted with graffiti stops about a kilometer before the Austrian border. There is no train station, no platform. But about 500 people, mostly from Afghanistan, Syria and Iran, literally jump out of the train.

They are in Slovenia and this is their last stop before asylum. They've spent the night in a half-heated tent on the other side of the country, not far from the Croatian border. It's -6 degrees and snowing.

Last summer, migrants were greeted with applause, smiles and cheerful greetings. Now, with more than a million people passing through, the families are ushered along by border police and army personnel who shiver on the sidelines and do not smile.

Children who had been waving from the train windows wait for parents to help them hop down. There are a lot of happy shouts and smiles. Thrilled for the latest four-hour train ride to be over, the kids run in circles as parents gather bags. Within five minutes, the train is empty but for one family. 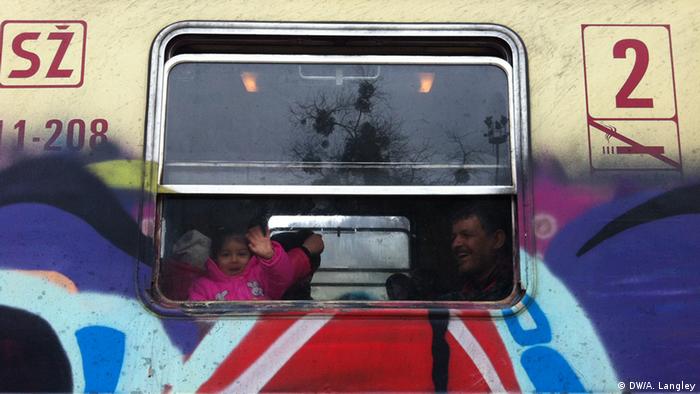 Trains bring refugees to the border

One man, perhaps in his late 40s, cannot help his four children. He stands at the train doorway, leaning on crutches and staring down at the gap between the last train step and the ground below. He is wearing sandals and thin socks although the temperature outside is well below freezing.

His wife stands next to him and looks on mutely. She is carrying her youngest daughter, who is two and wrapped in a heavy blanket. The daughter is asleep and, from the mother's hand signals, a visitor understands that the little girl has a fever.

A young man and a visitor help the family's three older children down from the train. Then they pass the sleeping toddler to the oldest daughter, who looks perhaps 10 or 12 years old. Next, a wheelchair gets passed down from the wife. Finally, she helps her husband down the two steps. The visitor and the young man help him swing from the last step down to the ground.

Embarrassed, the man gives a weak smile of thanks. Through a few words in English and a lot of hand signals he explains that he is from Syria and was shot in the back four months ago. “Chermany,” says his wife. “Doctor.” 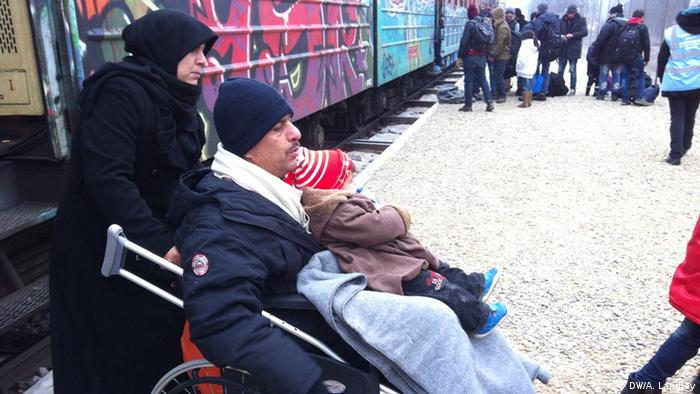 Then she hands him the toddler and begins to push the wheelchair over the frozen gravel, across a street, into the snow-covered grounds of the border crossing. UNHCR volunteers wearing light blue vests usher them into tents where they must wait for their turn to cross into Austria.

Dash to get in line

Three extension cords dangle down from the top of the entrance, and most of the men race over to charge their phone batteries. Mothers use the time to change diapers or breastfeed their babies. Others grab heavy gray blankets and lie on army cots, bored. 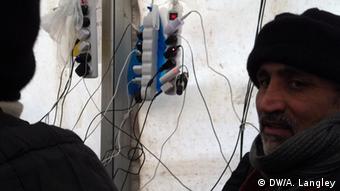 The chance to recharge phone batteries is eagerly taken

Nearly all of them wear new snowboots, down jackets, hats, mittens and scarves. Gifts from UN camps, they say. Some from Greece, others picked up in Croatia. They clearly are the most prized possessions they own.

In less than an hour, the bullhorns announce that the first group of 100 people can cross, and there is a mad dash to line up. The Syrian woman counts the kids around her and begins to push her husband in the wheelchair. At first, the line appears orderly, but quickly it turns to chaos, as 500 people attempt to be the first group to cross.

A father in a black jacket yells out for a lost child. Panicked, he leaves his wife and son in line to look for the missing girl. A newborn screams. The police try to count as people pass through a metal barrier, but soon, the shoving is so great the barrier begins to teeter. One officer loses his temper and raises his baton. Another yells out, “No push!” An interpreter comes on the bullhorn again, begging for order. The father comes back carrying a sniffling girl in a bright pink snowsuit whose head is buried in her father's shoulder. 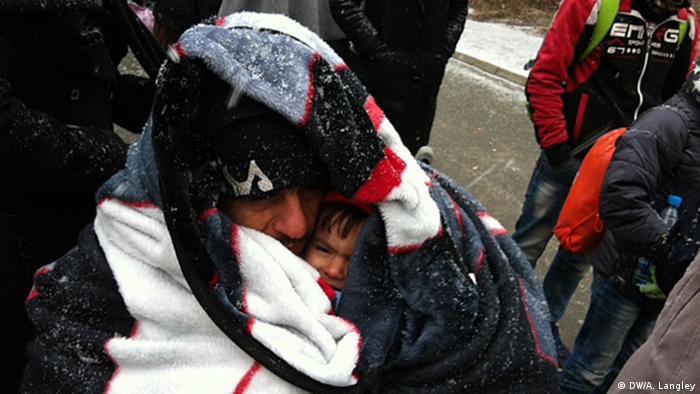 Winter conditions are making life even harder for refugees

The police see the Syrian family and the wheelchair on the edge of the crowd. They erect the barrier so no one else can pass until the woman can push her husband to the front. She bobs her head in thanks.

As they wait to enter Austria, snow blankets the fevered child and the wounded man. But the family somehow continues to smile.

Austria has erected its border fence with Slovenia. The country has also rolled out a border management system that carefully screens passports and only allows refugees seeking asylum in Germany or Austria through. (22.01.2016)

German Finance Minister Wolfgang Schäuble has denounced the "lack of coordination" in Austria's decision to introduce a limit on the number of refugees. Vienna has said the move is a "wake up call" to Europe. (22.01.2016)