The refugee crisis in Greece is making its impact felt even in areas far away from the islands of the Eastern Aegean and the country's northern borders. Pavlos Zafiropoulos reports from the Peloponnese. 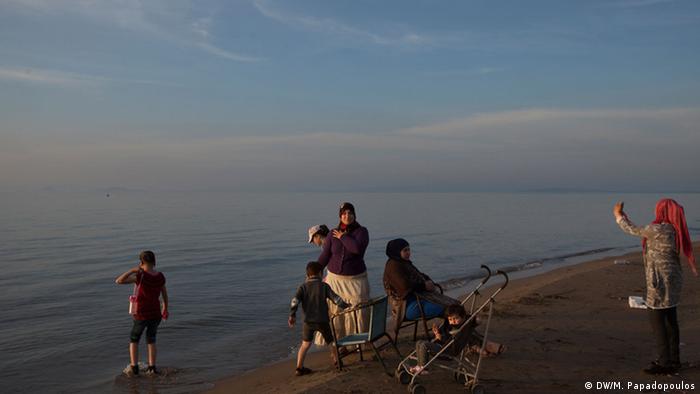 Sitting in his ground-floor office in the port of Patras, Tryfonas Korontzis is frank about what he believes the summer holds for irregular migration on Greece's western coast. "I believe there will be a significant rise," he tells DW. "We are on alert."

Korontzis is the head of the Patras Coast Guard, the service tasked with monitoring the key port on the northwestern corner of the Peloponnese. Large passenger ferries leave daily for Italy, a fact that has traditionally made the port a magnet for irregular migrants seeking passage to northern Europe. Korontzis's job, among others, is to stop them. In many ways Patras is Greece's Calais.

Yet with the establishment in 2015 of the so-called Balkan route over Greece's northern border as the main thoroughfare for refugees and migrants seeking to head north, Patras saw a decline in the traffic of irregular migrants. Even as Greece bore the brunt of the largest influx of refugees since the 1920s, Patras was for once far from the epicenter of the migration crisis gripping the country.

That now looks likely to change. With the closure of the Balkan route and over52,000 refugees and migrants still trapped in the country, migrants and people smugglers are beginning to look westward. Already, Korontzis says, migrants (mainly young men with little to lose) have returned to the empty factories near the port and there has been an uptick in the number of people apprehended travelling with false documents or hidden in trucks' cargo spaces or even gas tanks.

Furthermore the smuggling rings that facilitate such travel never really went away. "Here there is significant organized crime, not only the migrants. We have confiscated about two metric tons of drugs since January 2014. Hashish, coke, heroin, ecstasy, some other pills that I'd never seen before. Also cigarettes and whatever else you can imagine," Korontzis says.

The port is only a tiny fraction of Greece's long western coast which is sparsely populated and infrequently patrolled. "The coastline of our country and particularly the western part is particularly amenable [to smugglers]. If the weather is good and you have a speedboat, in two, three hours you are across." Korontzis admits. Furthermore high levels of summer tourist traffic are expected to make it easier for those with forged papers to slip through the cracks.

These facts have led many to argue that refugees and migrants should be kept well-clear of Greece's western ports to prevent new irregular routes from being established.

All of which make it all the more surprising that on the western coast of the Peloponnese, a mere 45 minutes south of Patras, one can find what is probably the most well-appointed refugee camp in all of Greece. 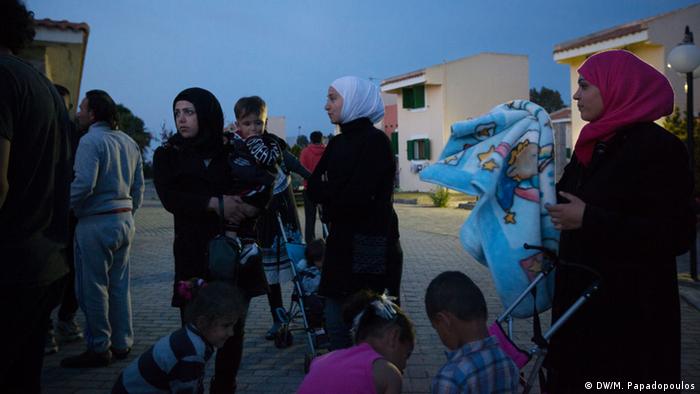 The LM Village is a complex of municipally-owned summer bungalows on the sea-front near the village of Myrsini. Constructed to provide summer lodgings for tourists, the complex fell into disuse about seven years ago due to a legal battle between the two municipalities that share ownership of the property. But the Greek state's dysfunction proved to be the refugee's gain. As of late March it has been converted to a refugee camp.

That is largely due to the efforts of Nabil-Iosif Morant, a doctor originally from Syria who moved to the area over two decades ago with his wife who hails from the Peloponnese. About a year ago, Morant ran for mayor and won. He says he is the first non-native Greek to ever have been elected to the position - not only in the area, but in the entire country.

What makes his election even more surprising is that Morant's jurisdiction includes the area of Manolada where in 2013 several dozen migrant strawberry pickers were shot at and injured when they had the temerity to ask for wages that had not been paid for six months. The high profile case drew attention to the plight of undocumented migrant workers in Greece, many of whom have suffered racial abuse.

Yet with the refugee crisis rocking the country, Morant, with the near unanimous agreement of the local council, offered the property to the government for use as a camp under the condition that it would be used to house vulnerable families from Syria. Now roughly 340 people - of whom 200 are children - live in the camp. Many of the families are headed by mothers traveling alone with their children to find their husbands who have been granted asylum in countries of northern Europe such as Germany and Sweden.

"I came under attack at first for bringing the refugees here, from Golden Dawn supporters and the like. But now that they see the kids they don't say anything," he told DW. "When you see kids, no matter how tough you are you soften." It's easy to see what he means. Throughout the camp the sound of children playing adds a cheerful din and it is clear that many have already bonded with the local volunteers.

Waiting on the EU

The refugees are eager to know when and how they will be able to continue their journeys, a question to which Morant does not have an answer. None relish the prospect of staying for an extended period of time. 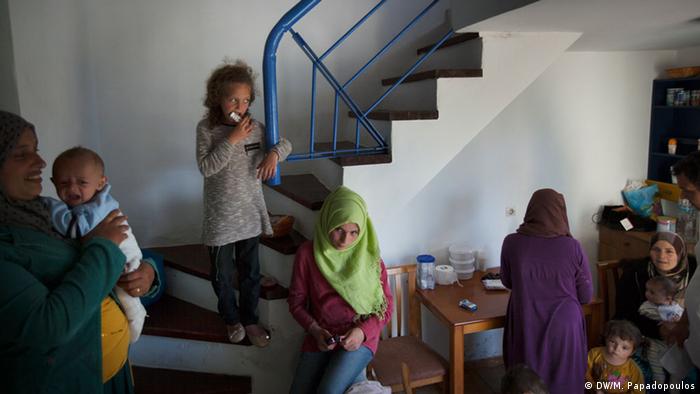 Whiling away the time: Although fairly comfortable, most refugees just want to get on with their journey

"If you give me all of Greece I don't want it. I want to go to my son," Ahmed Barajickli, who once owned a textile factory in Syria, told DW. Before they fled Syria, Barajickli and his wife sent their 10-year old son ahead with his grandfather to Germany believing they would follow shortly behind, but were caught out by the border closures. They do not know when they will be able to be reunited. "If there was justice this boy would be with his brother right now," Barajickli said hugging his other son.

But it is also clear that none of the Syrian families in the Myrsini camp are tempted to try their luck on the Patras boats which might as well be a thousand miles away. Few, in any case have the funds needed to pay the smugglers. All are waiting on the EU's relocation and reunification programs - which to date are barely limping along - to finally kick into gear.

Having already crossed one sea to flee the bombings and terror of their homeland, their only hope to cross the next is for the countries of the EU to finally live up to their promises of asylum.