Before being deported to Turkey, the last refugees must first be brought to a detention center. But they don't want to go. Some are threatening to commit suicide. Panagiotis Kouparanis reports from Lesbos. 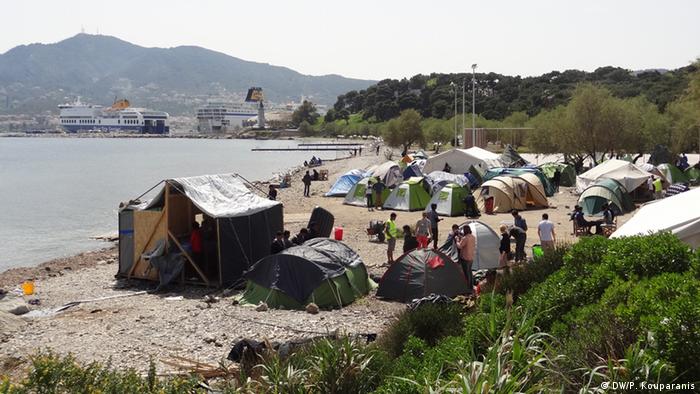 Refugee camp in Mytilene on the island of Lesbos

Although one out of six people on the island of Lesbos is a migrant or a refugee, they've disappeared from sight. They could be seen everywhere up until two weeks ago. But everything changed on March 20 with the implementation of the EU-Turkey deal, which led to their deportation onto the mainland. Newcomers - barely having left their boats - are now being transported directly by police buses to the Moria detention center.

No one knows what's going on

But there are still migrants that can more or less move freely. A camp has emerged half a kilometer (0.3 miles) above the harbor of Mytilene since last November. Some 250 people - mainly young men from Pakistan - live here in tents. Aid organizations provide them with the bare necessities. Activist group "No Border Kitchen" runs - it emphasizes - a vegan kitchen.

Until now, police and officials have left these migrants alone, but it's evident that the people in this camp are skeptical. So great is their fear of being arrested and taken to Moria that they don't go past the harbor fence, which lies a short distance from the camp.

Their fears have been rekindled with news of plans by the city's mayor to clear the camp. Good weather is to blame, with temperatures of 24C (75 F) attracting more people to the sea to swim. And the migrants' tents, which overlap with the communal swimming spot Tsamakia, are an eyesore. 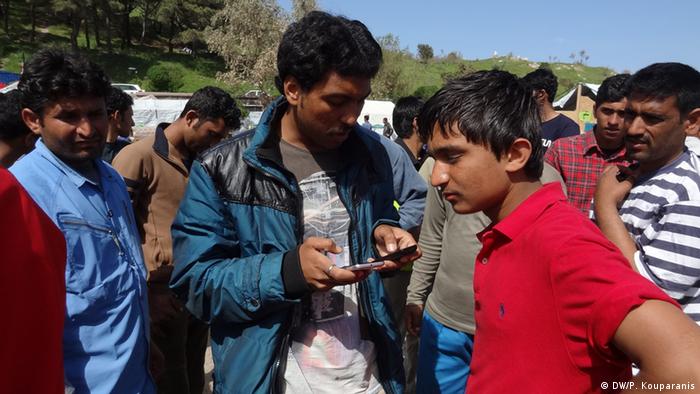 Last week, two volunteers and a lawyer met with the mayor, who agreed to a deal under which no police would appear at the camp until Wednesday, when it must be cleared. And after that? According to the mayor's spokesperson, buses will transport the migrants from the camp to the open refugee camp of Kara Tepe, which the municipality runs. Of course, these migrants must register with the island of Lesbos, which means traveling to the Moria camp, which is, in contrast, a detention center.

The mayor's office couldn't say whether that would mean immediate detention or deportation to the mainland: the migration and asylum agencies aren't subordinate to the municipality.

Joe Acrosan shrugs his shoulders. He doesn't know what will happen to the migrants in Tsamakia after Wednesday.

"That's the fate of the refugee," he told DW almost without emotion.

Acrosan teaches English and Spanish in Seattle and has been volunteering with refugees in Lesbos for the past six weeks. He was also one of the people who met with the mayor of Mytilene.

Everyone in the camp was informed about the meeting. Since then, a sense of helplessness has spread among the migrants and refugees there.

"What are we supposed to do other than be afraid," Ahmed tells DW in Greek.

He worked in Greece for seven years with a pension plan. In 2014, he returned to Pakistan, married and had a daughter. But the situation became dangerous for him, so he returned to Greece.

Athens was his goal, but now he can't reach it. Agencies have banned travel agencies from selling tickets to migrants or refugees. Ahmed did arrive in Greece before March 20, but he didn't register at Moria until after that date.

Only because he can speak Greek was he able to leave shortly before reaching the gates of the camp, leaving with only those possessions he was already carrying. Now he lives in fear of deportation to Turkey.

Fear appears to be the main feeling in Tsamakia. News from Moria only contributes to it. Friends report difficulties with filing for asylum. According to them, Pakistanis must reside in a specific part of the camp and, since Monday, another 100 of them have been brought in to be taken to Turkey.

On Sunday evening, a young man from Pakistan awaiting deportation reportedly cut his wrists. He was taken to the hospital. The barely 20-year-old Rehan says he'd rather die that return to Turkey. Originally from Lahore, Pakistan, he arrived in Lesbos on March 31. Rehan didn't register out of fear of deportation. His family sold almost everything for him to make it this far. He paid most of the $6,000 (5,280 euros) to traffickers who reassured him repeatedly that they would take him to Germany. Had he known about the closed borders, he wouldn't have set off in the first place.

On Tuesday morning, police reported that 187 migrants had come to Lesbos within the last 24 hours. They were taken directly to Moria detention center.

Ferhan, a student, tells a similar story. He concludes, almost incidentally, that people will either be allowed to remain in Europe, or they will kill themselves. Many of those standing around repeat these very words.

The first boatload of migrants has arrived in Turkey from the Greek island of Lesbos. It's the beginning of a controversial plan to stem the flow of refugees to Europe, one some view as illegal. (04.04.2016)