The emergency ship "Iuventa" from the Berlin-based aid organization "Jugend rettet" was overloaded in its last deployment. The organization's spokeswoman Pauline Schmidt spoke to DW about the incident. 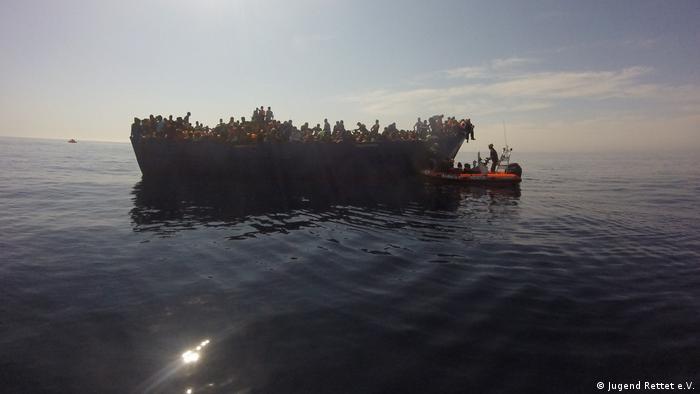 DW: How are the crew members of your rescue ship "Iuventa" faring after the last deployment?

Pauline Schmidt: We finished the mission two days earlier than expected, and the crew has been in Malta since Tuesday. Given the circumstances, they are doing fine, but they really need rest. We cooperate with SbE, a German group dealing with trauma-related stress management.

These specialists wait for our crews after every mission and help give them rest in Malta. It's important to note that our crews are experienced people with the right training and are emotionally prepared to deal with this situation.

How did it occur that so many refugees were taken aboard?

Our ship did not have as many refugees; rather it was swamped by people who were fearing for their lives. We were waiting on the deck of our vessel with our lifeboats when a wooden vessel of around 800 people began approaching us. The people in the boat panicked and jumped into the water. Some began to climb into the "Iuventa," which had already reached its maximum limit. And to top it all, the weather was really bad.

How do you decide who to save? Are there priorities such as saving those who are sick or pregnant etc.?

After those in urgent need of medical assistance, it depends on which conditions people are in. People in the water and those without swimming vests always go first. Children are always taken in with their parents. It would be absolutely unthinkable to separate them from their parents.

What ends up happening to the people who are saved?

The "Iuventa" is not a ship that brings people to land. We work together with the control center for sea rescues, the MRCC, in Rome to find solutions. They send us ships for assistance - for example on the Easter weekend, when they sent us a big tanker whose slipstream protected people on board the "Iuventa."

When we transfer people to NGOs who will take them to land, it always occurs according to the United Nations Convention on the Law of the Sea.  The agreement says that a so-called safe harbor should be designated for the migrants after distress. That is definitely not Libya, the country that the people fled from due to fear of death. The refugees are then registered on land and their identities are verified.

Does the number of refugees increase when it gets warmer?

The number of refugees on the Mediterranean route definitely depends on the weather. When the sea is calmer and during the summer months, there are more people on the water. 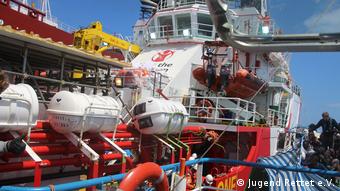 The upkeep costs of the "Iuventa" rescue ship are around 40,000 Euros a month

What happens when more than one vessel needs to be rescued? How does one decide who to help first?

Generally, our ship travels to the rubber dinghies first and checks their condition, regardless of the number of sea emergencies. The colleagues then distribute life vests and check how dire the situation is. Then the emergencies are sorted.

This means that rubber dinghies that are losing air have to be recovered first. There are situations in which we have to hold people on the rubber dinghies for a long period of time because the ship cannot take in any more people. In such cases, our crew travels back to the rubber boats in the emergency and checks their situation. The people are given some water and food and the crew takes those in who urgently need medical help.

With this system and using our life rafts to the right and left of the ship, we can take care of hundreds of people at the same time, until the MRCC in Rome sends us a boat for a transfer.

How do you mentally deal with the fact of knowing that not all the migrants can be saved during a deployment and that these people are sinking and drowning in front of you?

During the missions it is often the case that we find drowned persons in the water. There are also cases of death on board the rubber dinghies, because these people have been in narrow spaces for so long that they push against each other, panic and fall into the water.

While on a rescue mission, we find people who have gone through so much that our doctors can't help them. Very rarely do we have the extreme case of a person drowning during our deployment, because that is exactly what we train for. This is also a difficult moment for our crew, because every single person counts. Also, those moments are hard when it is clear that we can't make it to the sinking dinghies. Often the rescue ship is supported by tankers alongside it

How did the idea for this organization develop and who are the people who work for you?

Our organization was founded in 2015 as a direct reaction to the ship wreck in Lampedusa where 800 people died. These numbers and the absence of any help from the European Union prompted us to take matters into our own hands.

We began with eight students in Berlin, and our members come from all over Europe. The idea behind it was to show that civil society considers humanitarian work to be extremely necessary. We of course assumed the EU would follow if we managed the issue with our extremely limited resources. Unfortunately, this hope has not yet been fulfilled.

The team in Berlin and Malta work many hours in a day, but we don't give ourselves any salary. We fund our work and pay the bills by doing second jobs. Our operation costs 40,000 euros a month, and we cannot use money for salaries without a bad conscience if it compromises our work. We use our donation money solely for paying for our ship.

What type of encouragement for this type of work exists in German society? At the beginning of the refugee crisis many people were ready to help, but now there seems to be more and more resentment. What is your organization's perspective on this?

We have to deal with attacks from the right wing as well as absurd conspiracy theories. One assumes that we are somehow being financed by the US and that we profit from the refugee crisis. We are a non-profit organization and must account for each euro. Donations come completely from private donors. We collect funds by means of the betterplace.org donation website. But unfortunately, our transparency doesn't suffice for some.

The Italian coast guard and NGOs have saved thousands of migrants from the Mediterranean over Easter weekend. The EU is concerned smugglers will use better weather and instability in Libya to send more migrants. (16.04.2017)

German state ministers have demanded that the shot be allowed to be used in all adults, or they will go to waste. A leading immunologist agrees.

In an exclusive interview with DW, defeated opposition candidate Mahamane Ousmane warns unrest will continue in Niger until the "popular vote" is reflected and authorities put an end to mass arrests.

The German government is concerned about the spread of dangerous COVID-19 variants in France's Moselle region. Follow DW for the latest.