The European Union has declared 2013 the European Year of Citizens. People in Europe should appreciate the benefits of Europe and not just harp on the crisis, EU Commissioner Viviane Reding told DW. 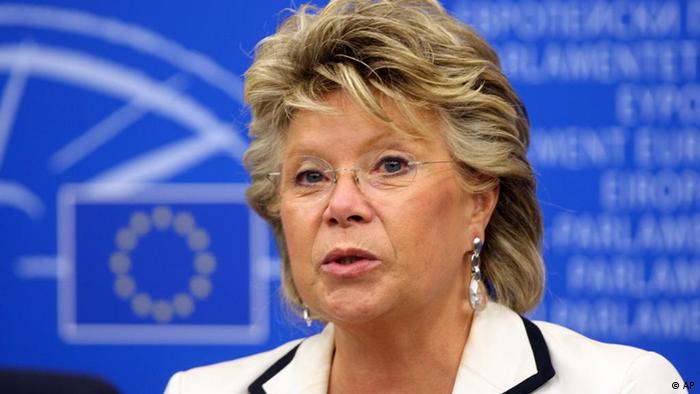 Deutsche Welle: European citizenship has existed for 20 years now. But many people in the EU don't even know they have this citizenship. Why is that?

Viviane Reding: Yes, the reason is that those responsible - and with that, I don't mean just those at the European level but national politicians as well - don't explain Europe well enough. For this reason, 69 percent of Germans aren't well-informed enough about their rights as EU citizens. They often feel cut out of political decisions - this applies to Brussels as well as Berlin.

Look, when the Council of the European Union meets in Brussels, national politicians behave as if it was a boxing match. "We've won against everyone else!" they say afterwards. And then people believe that what goes on in Brussels is really boxing matches, where one side has to beat the other.

But actually, the opposite is true. If one beats the other, all have lost. After all, we're doing this in order to build something together. But this message is constantly getting perverted, so that people don't understand how affairs in Brussels are progressing for them and for the whole continent.

What are your concrete plans for the European Year of Citizens?

It's important not to hold long speeches; rather, we need to do two things. First of all, naturally we have to educate - and continue to point out Europe's successes. Europe has united a continent that was always divided by war. We need especially to teach younger generations about this.

Secondly: Europe has united a continent to such an extent that it has become one country for an entire generation. Look at Erasmus students who are studying in neighboring nations. In 2011, half a million young people - just including Germans going abroad or students coming to Germany - participated in the Erasmus program. And that's exciting!

Look at those elements of daily life that are not even perceived as having a European origin. The free movement of people is seen as most important by 50 percent of Europeans. But they don't realize that this right was created by the EU. We have to make it clear to citizens that it was Europe that gave them this right.

There's been a lot of research and plenty of studies showing that people in the EU don't see themselves as having a common identity. People see themselves as Luxembourger, German, French or Polish - and only then, if at all, as European. How can one change this, in your opinion?

It's even worse than you describe. We also feel ourselves to be part of a city, a town, a region. I come from a steel-producing area in Luxembourg, Esch sur Alzette. I see myself first and foremost as typical for this region. Then I am a Luxembourger. Then, I'm European.

But the one doesn't rule the other out. As Europeans, we have to hold on to our specific roots, and that's exactly what we do. That should not be replaced with some kind of uniformity. That's also what makes Europe so attractive, because we can share this diversity with each other. And this is exactly what it is we want to explain in our dialogue with citizens. 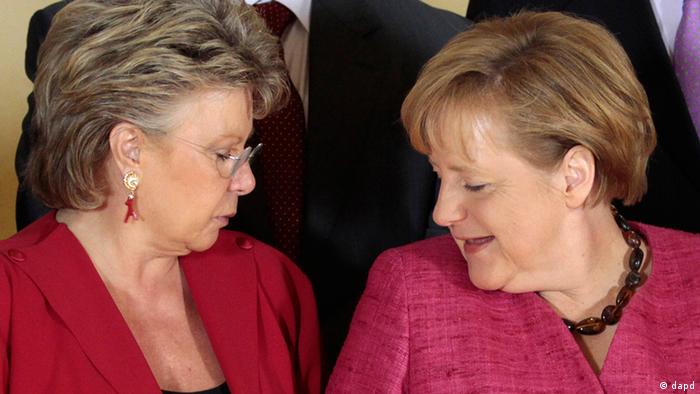 Reding is pleased to have Merkel on her side

Especially in recent years, many European citizens have seen Europe as a place of crisis, where billions in bailout money has been distributed from the north to the south. Has the debt crisis set back plans for more civic awareness?

What always saddens me is the manner in which we talk about it. What have German citizens been hearing about most over the past year? Europe's crisis, crisis in Europe, bailout billions, bailout package. For God's sake! One ends up thinking everything's going downhill and there's nothing left to save.

Shall I compare Europe and the United States? In the US, there's no crisis of trust in the dollar, despite its having even greater problems in its unified economy than the euro, despite the budget deficit being higher in the US than in the eurozone, and also despite the fact that the state of Minnesota went bankrupt in 2011.

Although Minnesota has a similar significance for the US as Greece has for Europe, the US didn't collapse as a result. We should stop spreading this pessimism. For 2013, I want to see more optimism, and more objective reporting.

If this is explained to people, then yes! In this regard I am very happy to receive support from Germany. At the start of last year Chancellor Angela Merkel called for the European Commission to form a European government. By the way, more than half of the German population agrees, as well - 65 percent were in favor of a political union. And that's even before we've begun a discussion with the people, with the citizens.

I believe people feel that something has got to change, and that we must grow together. They feel that we need a strong continent in order to survive in a globalized world. The people often have more sense than politicians do.

Viviane Reding is vice president of the European Commission in Brussels. She's responsible for justice and civil rights. The 61-year-old conservative politician has been a member of the Commission since 1999.

Europe, Merkel and the German parliament

It was one of the greatest challenges of 2012: Saving the euro as a common currency in the EU. For Germany, that challenge took center stage both at home and in Brussels, seriously testing its negotiating skills. (26.12.2012)

European countries are not ready for proposals for a political union. Economist Wim Kösters argues that the decisive question at present is whether shared rules for the currency union can be held to. (27.12.2012)