Rebel or ruffian: Who was Martin Luther?

Celebrating the 500th anniversary of the Reformation, the Wartburg Castle in Eisenach features the special exhibition, "Luther and the Germans." It explores the relationship between Luther and his region.

Who was Martin Luther and how is he portrayed today? This exhibition provides answers by exploring Luther's role as a national symbol of Germany and at the same time, a symbolic figure whom German history has instrumentalized throughout the years.

Five-hundred years after nailing his 95 theses to the door of the Castle Church in Wittenberg, the exhibition presents the concept that every period in German history created its own image of Luther. "For some, he was a German prophet, a liberator, a hero, a founding father of national identity, and for others he was a choleric ruffian, a shaman and a separatist," says curator Marc Höchner. 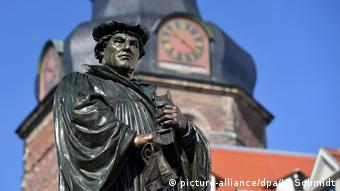 The show is separated into three major themes. The first focuses on Luther's city of Wartburg. The second explores the cultural and intellectual history of Luther's Protestant doctrine.

The final part of the exhibition demonstrates how the Protestant Reformation was used a political instrument throughout the ages, whether to promote freedom or servitude.

The Wartburg Castle in Eisenach, which receives over 350,000 visitors per year, is perhaps the most popular place in the world to commemorate Luther. However, it is also an important historical site. For almost a year, the thick walls of this castle protected the reformer as he translated the Bible into German.

At that point, his writings had already been banned and he was an outlaw after the passing of the Edict of Worms in 1512. In translating the Bible, he laid the foundation for the German language. 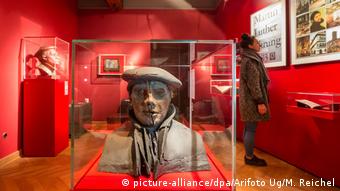 A room in the exhibition "Luther and the Germans"

The exhibition aims to show how competition between Protestant and Catholic beliefs led to the 30 Years' War (1618-1648).

Afterwards, Luther was gradually removed from theology and instead celebrated as the creator of the German language, responsible for uniting Germans.

Portrayed as a revolutionary by the German Democratic Republic

During the wars against Napoleon, and subsequently during the Wartburg Festival of 1817, Luther was portrayed as a hero fighting for freedom. During the German Empire he was painted as the archetype of a German national hero. The same was true during the First World War.

Later, he was used as justification for the anti-Semitism of the National Socialists. Even leaders of the atheist German Democratic Republic portrayed him as the initiator of a bourgeois revolution in 1983. 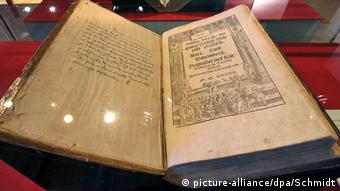 A 475-year-old Bible in the Wartburg exhibition

The exhibition spans more than 1,000 square meters. Over 300 items are on display, from paintings and printed works to sculptures, texts and everyday items that show how Luther historians conduct their research.

The archive of Saxony leant an important document to the collection: a hand-written papal decree from 1520 threatening Luther with excommunication. In response, Luther burned the letter publicly.

A comprehensive catalog accompanies the exhibition, which encompasses two additional special exhibitions: "The Luther Effect: Protestantism - 500 Years in the World" in Berlin's German History Museum, as well as "Luther! 95 Treasures - 95 people" in Wittenberg.

He was more than just the major painter of the Reformation. He was also a good entrepreneur who knew how to sell his art. Works by Lucas Cranach, the Elder, can now be admired in a major exhibition in Dusseldorf. (10.04.2017)

Don't you know Martin Luther? Why not? Admittedly, the man last made headlines 500 years ago. What's more, there is very little information about him and his life, and it usually consists of half-truths and legends. (12.03.2017)

From Martin Luther narrowly missing a lightning strike to his 95 theses, children in Germany have replicated scenes from the reformer's life - using Playmobil. They are on show to mark 500 years since the Reformation. (27.04.2017)