He was more than just the major painter of the Reformation. He was also a good entrepreneur who knew how to sell his art. Works by Lucas Cranach, the Elder, can now be admired in a major exhibition in Dusseldorf.

If artists want to be successful, they must also be good entrepreneurs. That holds true not only for present times, but also for the Renaissance. More than any other artist of his time, Lucas Cranach, the Elder mastered the art of marketing his own products. His trademark was a little snake with two bat wings, a ruby ring in its mouth and a crown on the head. This fantastic little animal was widely known among artists in the 16th century. Lucas Cranach, the Elder, used to add it to the lower corner of the 500 works he created during his lifetime. The Frederick III, Elector of Saxony, at whose court he worked as a painter, personally conferred the emblem to him in 1508, a move which proved a major advancement for Cranach.

A snake as a seal of quality

Born on October 4, 1472, in the small town of Kronach in the region of Franken, the artist called himself Cranach in homage to his hometown. Crowned with his prestigious emblem, Cranach quickly surpassed his father who had taught him painting. 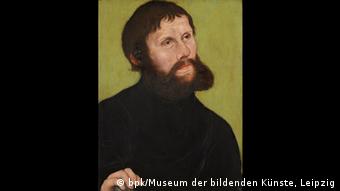 Somehow, the little snake almost appears like an ironic comment on the subject depicted by Cranach - for example, a nude Venus standing upright and wearing a thin veil which instead of concealing her genitalia actually did the opposite, emphasizing the nudity and reinforcing the power of seduction the love goddess has while wearing precious jewels around her neck. Cranach took on the Italian Renaissance art trend of painting a life-sized nudes and was the first painter north of the Alps to do so. It  turned out to be one of his biggest coups.

Lucas Cranach, the Elder, knew very well how to reach a broad audience with his art. His golden era started after he settled down in the small town of Wittenberg at the River Elbe in 1505. Frederick III, often called Frederick the Wise, was just turning the little town of 3,000 inhabitants into a residential city where science and art were to flourish. At this stage, Cranach, who had already acquired a reputation as a gifted painter of portraits in humanist circles in Vienna, was no longer an unknown artist. In Vienna, he portrayed noblemen, lawyers and distinguished scholars.

Thanks to Frederick the Wise, Lucas Cranach then settled down in Wittenberg as a court painter, a move he greatly profited from. He is depicted in a very dignified manner on numerous Cranach works wearing an ermite coat and a black hat.

Lucas Cranach was inspired by Italian Renaissance art. The influence is clearly exemplified in numerous works alluding to the education of modern free men who had liberated themselves from Medieval chains. The exhibition in Dusseldorf's Kunstpalast museum includes approximately 200 paintings and graphic reproductions of the famous Renaissance painter and analyzes the multi-faceted mutual influences between assignments, materials, techniques, the organization of the studio and forms of artistic expression. 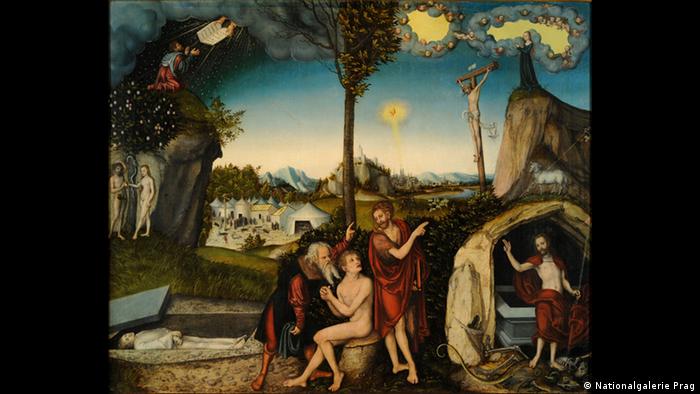 Many of the works are well known, but others are being shown for the first time in Germany, among them the painting "Madonna with Child" (1510). For decades, it was believed to have been lost, but it was later discovered that a priest in the Silesian city of what is now Wroclav, Poland, had substituted the original for a copy during the Second World War in an attempt to protect it from possible war damage. It resurfaced in 2012 and can now be seen in Germany once again.

During Cranach's time, the world changed rapidly - and he wanted his art to accelerate this process. That's why he built up a large, flourishing studio in Wittenberg where he worked with his sons and numerous assistants with the aim of spreading the ideas of the Reformation.

Cranach produced entire series. He introduced division of labor in his studio, creating templates of common subjects and motifs, offering his works in fixed formats and working with variations and duplications. He was in charge of the most productive studio of the 16th century, selling commissioned works within a short time. His superb organization and efficiency helped to express the ideas of the Reformation in pictures.

"He spread ideas by producing portraits in great numbers, creating plenty of new art topics and spreading them across Europe," says Gunnar Heidenreich, head of the Cranach Digital Archive at the Museum Kunstpalast. 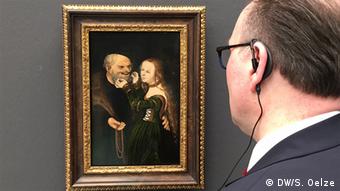 A visitor ponders "The ll-matched Couple"

The artist was a brand, says Heidenreich: "For decades, Cranach supplied customers with artworks of consistent quality, and he also made sure his employees realized works that were so good they couldn't be discerned from the master's works."

Painter of the Reformation

Martin Luther and Lucas Cranach, who first met in Wittenberg on the River Elbe, must have really bonded. Cranach was best man at Luther and Katharina von Bora's wedding, he was godfather to their children and painted the Great Reformer countless times. Cranach had a monopoly on Luther portraits, but he also didn't shy away from painting paying Catholic customers. "Without Cranach, the Reformation would not have been so successful across Europe," Heidenreich argues.

Painting in an anatomically correct fashion was not important to Cranach. His approach to the figures he painted was relaxed, and sometimes he would change them again later, Gunnar Heidenreich found out when examining the paintings' background and composition.

"Contures were more important to him than accurate limbs, which Dürer strived for," he says, adding that what mattered to Cranach was the overall composition. The grand exhibition in Dusseldorf allows a glimpse of how expertly and ironically he fulfilled his clients' demands, and how he created masterpieces and perceptive portraits with a light hand.

From the Renaissance to modern times

It's not the first show to present evidence of how Cranach's painting echoes in 20th and 21st century art.

Many artists who enjoy collages and quotes use Cranach motifs. Modernist artists in particular are interested in the Renaissance artist's portrayal of women: Ernst Ludwig Kirchner, Pablo Picasso and Otto Dix adapted his motifs, as did Andy Warhol, who re-created Lucretia, the ancient Roman woman who stabbed herself to death out of embarrassment. Perhaps he recognized that even back in the 16th century, Cranach anticipated the principles of pop art.

Irina Antonova: Looted art is 'the price paid for remembering'

As a historical Cranach exhibition takes place at the Pushkin Museum in Moscow, the museum's former director Irina Antonova tells DW what it's like to work with looted art hidden in the basement. (08.03.2016)

The Cranachs in Moscow

The Second World War resulted in parts of Gotha’s world-renowned Cranach collection ending up in Moscow. After years of dispute between Germany and Russia, the paintings are now once again on display together. (07.03.2016)

The Warhol of the Renaissance: Lucas Cranach, the Elder

One of the most productive artists of the Renaissance, Lucas Cranach, the Elder, is featured in a new exhibition in Dusseldorf that explores his oeuvre and his influence on art in the 20th and 21st centuries. (07.04.2017)

The Cranachs and Medieval Modern Art