Rates on Italian bonds soar, raising fears of contagion | Europe | News and current affairs from around the continent | DW | 25.11.2011

Turmoil in European bond markets has raised concern that the sovereign debt crisis has spread to the eurozone's core: France, Germany and Italy. The yields on Italian bonds could force Rome to seek a lifeline. 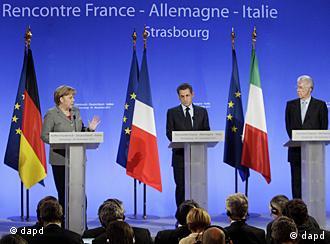 The eurozone's core is no longer safe from the debt crisis

The yields on Italian bonds soared to record highs on Friday, threatening to drive Rome into bankruptcy, a scenario which French and German leaders agreed would spell the "end of the euro."

During Italy's bond auction on Friday, the cost of six-month notes nearly doubled from 3.5 percent to 6.5 percent. The yield on bonds due in two years soared from 4.6 percent to 7.8 percent, a eurozone record.

Italy already must scrape together 150 billion euros ($199 billion) in order to pay for bond redemptions that are due between February and April. The eurozone's third largest economy faces an overall debt burden of 1.9 trillion euros, which equals 120 percent of its gross domestic product (GDP).

If yields on Italian bonds do not taper off, Italy could be frozen out of international credit markets, forcing Rome to seek a bailout in order to avoid a sovereign default. As the world's eighth largest economy, Italy is considered too big to fail.

Italian Prime Minister Mario Monti's press office said in a statement that French President Nicolas Sarkozy and German Chancellor Angela Merkel "were aware that a collapse of Italy would inevitably be the end of the euro." 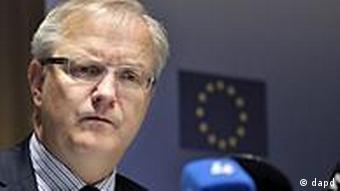 Rehn believes a possible contagion looms over the eurozone

An attempt to rescue Italy would likely max out the resources of the eurozone bailout fund, the 440-billion-euro European Financial Stability Facility (EFSF).

"Definitely the euro will not fail," Rehn said during a visit to Rome, where he held talks with Monti.

The rising yields on Italian bonds came after a rare German flop on Wednesday, with Berlin pulling in 3.9 billion euros in a six-billion-euro bond auction. Germany has traditionally been considered an investor's safe-haven, with its "bund" effectively serving as the eurozone's gold standard.

Belgium, the linguistically divided nation that many of the EU's institutions call home, became the latest eurozone member state to suffer a credit rating downgrade on Friday, with Standard and Poor's slashing its rating from AA+ to AA.

"The recent developments in euro-area sovereign debt markets suggest that contagion is spreading from peripheral countries to the so-called core countries," Rehn said.

Although Merkel, Monti and Sarkozy have agreed to change the EU's treaties to enforce fiscal discipline on eurozone member states, there are questions about whether the process would take too long for jittery markets.

So far, Merkel has resisted pressure to support the creation of common bonds for the entire eurozone and an expansion of the European Central Bank's mandate, allowing it to monetize debt and act as a lender of last resort to troubled nations such as Italy.

Rome, meanwhile, has committed itself to balancing its budget by 2013 in a bid to prevent panic among investors.

"Italy is faced with formidable challenges," Rehn told Italian lawmakers while in Rome. "The new government needs to deliver on fiscal consolidation and adopt bold measures to re-launch growth."

The leaders of France and Germany have met with new Italian premier Mario Monti to discuss strategies to combat the debt crisis, as signs grow that not even their economies are immune to turmoil in the bond markets. (25.11.2011)

The eurobond debate in the eurozone shows no sign of disappearing, even if Angela Merkel and Nicolas Sarkozy remain opposed to the idea. Yet most experts agree - eurobonds will come sooner than later. (23.11.2011)

Thursday's meeting between Angela Merkel, Nicolas Sarkozy and Mario Monti has shown once again who is pulling the strings in Europe, says DW's Christoph Hasselbach. (25.11.2011)