The young team put together by RB Leipzig have surprised many in the Bundesliga. DW's Thomas Berthold spoke to Ralf Rangnick about his recipe for success and why he is not interested in working with the national team.

DW: We all know that football is played at a much higher pace than it was when you were my coach at Stuttgart, but what about the tactics? How have they changed over the past two or three decades?

Ralf Rangnick: At the end of the 1990s we used a four-man back line and we tried to put a lot of pressure on the ball. But we were the exception. In the mid-to-late 1990s most teams were still using a sweeper and two markers and a No. 10 who was mainly absolved of any defensive duties, with two water-carriers behind him. This was the standard formation in the Bundesliga. Then teams like Stuttgart, Mainz, Ulm or Gladbach came along and introduced a style of play that was more focused on the ball. In the last six or seven years the extreme transition game has come into play, in which teams rush forward after having won the ball, and after having lost it, many teams try to switch immediately to counter-pressing. This has led to a lot more sprinting. The number of fast runs or sprints in a match has increased dramatically. In terms of athleticism and dynamics, football has become a completely different game.

The best man or women for the job

Your recipe for success at Hoffenheim and Leipzig has been to ensure that you have all the power you need put your plan in to action without compromise. Can this model be duplicated?

Not entirely. Of course in Hoffenheim in 2006 and here in Leipzig in 2012, we started out with an essentially clean slate. In both cases we tried to hire competent staff, in other words, the best man or woman for the job. Hoffenheim veered off of this path a couple of times since I left. Not only did that cost them a lot of points in the standings, but also a lot of money. Now, with Julian Nagelsmann, they have returned to their original virtues. Here in Leipzig, the development has been based mainly on the quality of our players and their further development. I believe that we also have a good team supporting the players. Otherwise this rapid development would not have been possible. 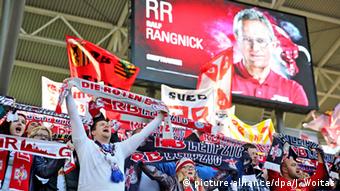 Ralf Rangnick is popular among the fans in Leipzig, after all, he was responsible for bringing the Bundesliga back to eastern Germany.

This raises the question as to whether everybody else has been caught napping. Leipzig are not the only club to invest their money…

We follow our own path. I can't say what we are doing better or worse than others. I can only say that we do what we do out of conviction. We first asked ourselves what style we wanted to play, then we went out and scouted and signed new players, and developed them.

When you were coaching in Stuttgart, you seemed to have rules about what kind of haircuts the players were allowed to have, or what kind of cars they could drive. Is this the same in Leipzig?

Well, in Stuttgart, I didn't have too much to worry about in terms of the haircuts. However, when it came to the cars, yes we did have… let's call them guard rails. I think that particularly when it comes to young players who suddenly find themselves earning a few more euros, it is important that we offer them some guidance. Here we have decided that the youngsters who don't have much experience with cars should not get cars that have the most horsepower, but instead normal, not particularly fancy automobiles. The players that are a bit older, between 21 and 24, may have a somewhat bigger car. And of course, the veterans may choose a large SUV. It's all about a certain modesty, that you don't have to purchase a big car as a status symbol right after you have signed your first big contract.

You also have a sharp eye for training. Is it true that you even record training sessions on video, which you later use for analysis?

Yes, we have cameras at all of our training grounds. We can view every training session from any perspective. We have two people who do nothing by analyze video and hold individual coaching sessions. I believe that video analysis is one of the best methods to help players improve. 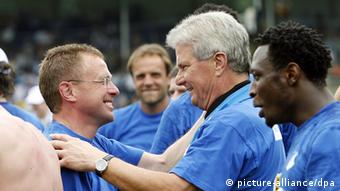 Ralf Rangnick and Dietmar Hopp, who made his millions with SAP took village-club Hoffenheim up to the Bundesliga.

Leipzig are on course to qualify for the Champions League. You are fond of saying that one has to set oneself ever-higher goals. Is this the case now?

If we do wind up finishing in the top three in the Bundesliga, then we will play in the Champions League next season. This chance exists, of course. However, we are not really thinking about what could happen in May. We have always been thinking from week to week, always focusing on the next opponent. At the end of the day, that's what football is all about.

We are not a marketing tool

Now a question from one of our users, Joshua Hall of England. He asks: "How does it feel to be nothing but a marketing tool for a soda company and the most hated club in Germany?"

As far as I can see there are many clubs in the Bundesliga that have no problem with how we have built up the club. In eastern Germany, we are the third-most-popular club in the league. I think there are fewer "RB haters" than there were during our time in the second division. We are very happy with our sponsor, but we never think for one minute about how we can sell more cans [of Red Bull]. What drives and motivates us is developing players. We are not a marketing tool.

What are you going to do when your time here is over? Would you like to become the sporting director at the DFB (German football association)? They happen to be in the market for a strategist at the moment.

No, I don't think that is for me. Not just that, but I really appreciate what I have here. And to be frank, it is just starting to be fun here. We are now sowing the seeds of the development work that we have done over the past four years. At the moment, I can't imagine anything coming along that would entice me away. We know from the Hoffenheim experience that now that it things are working, somebody like myself is needed to ensure that the things that affect the atmosphere around the club don't change.

RB Leipzig sporting director Ralf Rangnick, 58, first came to national prominence in Germany in 1999, when he became head coach of Stuttgart, where one of his players was Thomas Berthold.  He later led Hoffenheim to two consecutive promotions, from Germany's third tier all the way to the Bundesliga.