Spain's acting prime minister has begun efforts to form a government. Following inconclusive elections in June, the king has asked Mariano Rajoy to put together a plan to end a long-running parliamentary deadlock. 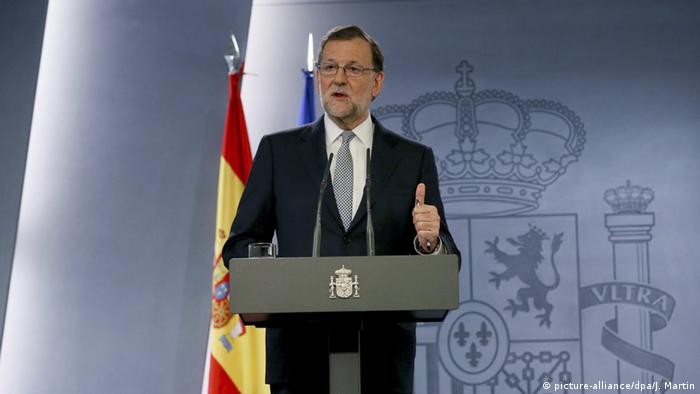 The People's Party announced that acting Prime Minister Mariano Rajoy would reach out to the opposition in a bid for support after accepting the King Felipe IV's petition to form a government following inconclusive elections in June and December. The king tipped assigned the task to the PP leader on Thursday, following three days of consultations with party leaders seeking to snap a seven-month political deadlock.

Upon receiving the king's endorsement on Thursday, Rajoy wrote on Twitter that he wanted to govern and would "do everything possible to achieve that."

Despite scandals, Rajoy's center-right Popular Party, in power since 2011 and now running a caretaker government, won 137 seats in June, 39 short of a majority. As the PP has no natural coalition partner, Spain could face several more months of a caretaker government led by Rajoy - and a third election in the fall if he fails in his efforts.

Rajoy has two routes to retaining his post. The first, and less likely, requires the support of a parliamentary majority. Failing that, he could win by receiving a plurality in a second vote if enough legislators abstain.

As it stands, Rajoy would lose in both scenarios because most parties, including the main opposition Socialists (PSOE), have committed to actively voting against him. So far, only the classically liberal Citizens party, which came in fourth in June's elections, has pledged to abstain. According to the PP's spokesman, Rajoy planned to call PSOE leader Pedro Sanchez and the Citizens' Albert Rivera on Friday.

"The objective is to form a government as quickly as possible," PP spokesman Pablo Casado told journalists on Friday. He added that should the PSOE's opposition lead to further deadlock there could be fresh demonstrations on the streets.

On Friday, Auxiliadora Honorato, a legislator from Sevilla for the left-leaning Podemos alliance, called on Rajoy to stop being the proverbial "dog in the manger" - a reference to a fabled hound whose presence in the hay bin led to a hungry horse's inability to eat. Honorato said Spaniards were "surprised and perplexed" by Rajoy's insistence on leading efforts that, without support, are likely to end in further deadlock.

"There are sufficient possibilities to form a government with the numbers that exist, and all parties have the obligation to try until the end," said Honorato, who added that a third round of elections would be "a fraud and a disgrace."

Podemos is the third power in Spain's parliament by seats.

King Felipe dissolved the parliament in May to make way for June's elections.