The head of Spain's Socialists says he won't form a coalition with the People's Party. Pedro Sanchez met the PP's Mariano Rajoy for talks after elections in December left no clear route to a government. 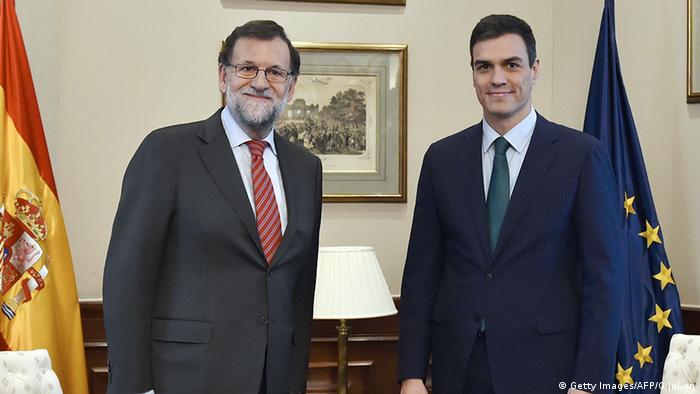 Talks between Mariano Rajoy (left in photo), of the right-wing People's Party, and his main rival, the Socialist Pedro Sanchez (right) ended with no news on how a government might look. King Felipe VI asked Sanchez to form Spain's next government after Rajoy passed on the task when the 2015 parliamentary elections left his PP with no natural partner. The party had won just under 29 percent of the vote in December.

"The Socialists believe that the PP is a very important party in Spanish politics," Sanchez said after the men met for a half-hour on Friday. "But it's a party that needs to regenerate and clean itself up, and this will only happen if it is not in government," he added, referring to the numerous corruption scandals that have tarnished Rajoy's party.

The Socialists had taken 22 percent of the vote for second place in December's elections. With Sanchez yet to make progress, the prospect of a new vote has grown. Sanchez hopes to avoid that, as recent surveys show that the anti-austerity Podemos party, which won just under 13 percent in December, would overtake the Socialists in a new vote.

'The most sensible' government

Rajoy, who will remain prime minister until the deadlock breaks, had appeared conciliatory on Thursday, when he said he would consider asking the European Commission for more flexibility on Spain's public deficit targets, which all other parties advocate. And on Friday, he pointed to the PP's election numbers and said "the most sensible" government would consist of his party, the Socialists and the right-wing Citizens party.

Sanchez, however, said he would not change his preference for a center-left coalition with Podemos. Such an alliance remains out of reach for now. Last week, Pablo Iglesias, the leader of Podemos, said he would only start talks with the Socialists if Sanchez were to abandon talks with the Ciudadanos, which won 14 percent in December.

At any rate, Podemos and the Socialists would still need to attract regional parties to form a government. Several regional parties, however, come from Catalonia and want a referendum on the semiautonomous state's full independence, which Sanchez opposes.

Sanchez said he hoped to reach an agreement on a coalition by the end of the month and would seek a confidence vote in parliament at the beginning of March. Failure in that vote would mean that candidates from other parties would have two more months to form an alternative majority before a new national election had to be called.