Raising my child vegan: Is it possible?

Vegans can often be judged harshly and asked critical questions about their diet — even more so if they decide to raise their children vegan. But is it actually harmful or irresponsible? 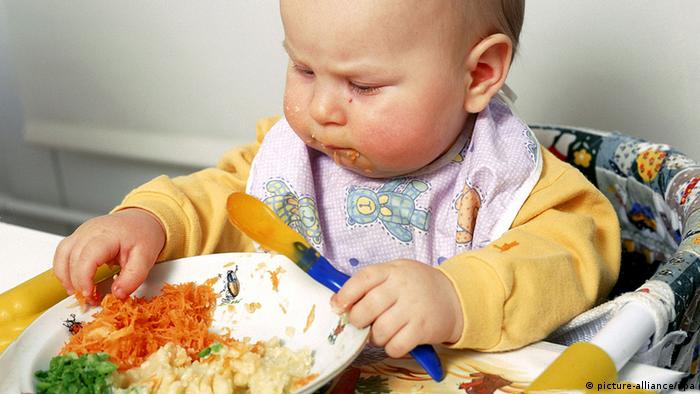 Many children in the world don't get enough of the right nutrients, no matter which diet they are on

"Don't tell me you're following this trend now, too!"

That was the pediatrician's reaction when Marco and his wife explained to her that they were raising their daughter on a vegan diet. Protein, vitamin B12, iodine, zinc, selenium — where are these vital nutrients supposed to come from? The doctor asked.

"You have to have your facts ready," said Marco, who explained to the doctor he and his wife knew which plant-based foods contained which micro and macronutrients and how to make up for a lack of meat and dairy in their child's diet.

In fact, numerous studies on adults have already shown that vegetarian and vegan diets do not necessarily lead to nutrient deficiencies. On the contrary, they can have tremendous health benefits. Even the more traditionally-minded German Nutrition Society (DGE) says a plant-based diet "is not only beneficial to human health, but it is also climate-friendly."

An increased risk of type 2 diabetes, cardiovascular issues and various cancers have all been linked to the overconsumption of sugar, saturated fat and meat.

Although an increasing amount of vegetables is being eaten in Germany, meat consumption remains high — almost 60 kilograms per person every year, according to thelatest report from the German Nutrition Society (DGE).

The research institute also reports that one in seven children in Germany is overweight. Worldwide, 340 million children and adolescents were overweight or obese in 2016, according to the World Health Organization (WHO). In addition, there are 38 million overweight children under the age of five. Around the world, the number of overweight people has almost tripled since 1975, especially in industrialized nations.

This means, for a large number of children in the world — a majority of whom are not vegan or vegetarian — a healthy diet is sorely lacking.

The fact is, no matter which diet someone subscribes to, if they don't pay attention to what their nutritional needs are, their health will suffer.

Parents who feed their children a vegan diet and do not pay careful attention to what food they're putting on the table will put their children's health at risk, says doctor and nutritionist Martin Smollich in an article on his blog, entitled  "Vegan or healthy? That's the wrong question!".

At the same time, the overconsumption of fatty, sugary food, which has poor health outcomes for children and adults, is a much more common problem.

"The number of children showing severe health damage at a primary school age due to a hypercaloric diet and other forms of malnutrition is probably millions of times higher," writes Smollich.

Markus Keller is a nutritionist and one of the founders of the Research Institute for Plant-Based Nutrition (IFPE). Working with the DGE, Keller has conducted two studies to clarify whether children and adolescents fed vegetarian or vegan diets actually suffer from nutrient deficiencies, as is often claimed.

"Before we did our studies, there were exactly two research studies with explicitly vegan children," said Keller. Children fed a vegetarian diet have been somewhat better studied, but overall, there is not a lot of research.

Keller studied two different age groups of children with 400 subjects in each. Small children from one to three years of age and children and adolescents between six and 18 years of age. In the groups, there were about one third that ate a vegan diet, one third raised on a vegetarian diet, and one third who ate meat as part of their diet.

"In both studies, there were no significant differences in age-appropriate development — meaning average height and weight," said Keller. He did acknowledge, however, that this research only captures a small section of society and isn't representative of all children who are fed these diets.

There are no long-term studies in existence yet, he said, although he and his team are planning follow-up studies.

Nevertheless, his team's data provided some important insights, such as about vitamin B12. This vitamin helps keep the body's nerve and blood cells healthy and helps make DNA.

It can only be obtained through food and is found primarily in animal products — which can present a challenge for vegans.

Not for well-informed vegans, like Marco and his wife, though. To make up for not eating animal products, they drizzle a liquid B12 supplement on their daughter's cereal.

"The vitamin B12 levels were particularly good in the vegan children and adolescents," said Keller. The scientists were able to determine this on the basis of blood samples. For Keller, that indicated that people raising their children on a vegan diet are aware of the importance of supplementing B12.

Calcium, vitamin B2, iodine and vitamin D were all below recommended levels in all three dietary groups, he said. Children in the vegan group scored lower for calcium and vitamin B2. But their scores for vitamin E, vitamin C, folic acid, magnesium, fiber and even iron were higher than the vegetarian and mixed diet groups. The vegan group's diet also included less sugar, less fast food and more vegetables, fruit, whole grains, nuts and legumes than the others.

The meat-eating children were found to eat much more meat than is officially recommended for this age group.

"Overall, the vegan children had the best food pattern on average, mostly eating whole, plant-based foods" Keller summarized. According to the German Federal Institute for Risk Research (BfR), vegans in general are more conscious about their diet and more likely to actively seek out information about necessary nutrients than non-vegans.

If going vegan, do it right

But if you do decide to cut out animal products for you and your children, Keller said, it's really important to find a replacement for critical nutrients usually found in animal products, such as B12.

The biggest challenge about raising a vegan child, says Marco, is making sure he is up to date with nutrition research and recommendations. He and his wife are waiting on blood test results for their daughter to ensure she is getting enough of the vitamins and minerals she needs.

It is something nutritionist Markus Keller recommends getting done about once a year, no matter what diet the children are on.