German, Austrian, French and Swiss rail operators are partnering up to provide a network of cross-border sleeper trains linking 13 major European cities. It's something of a revival for a dying service. 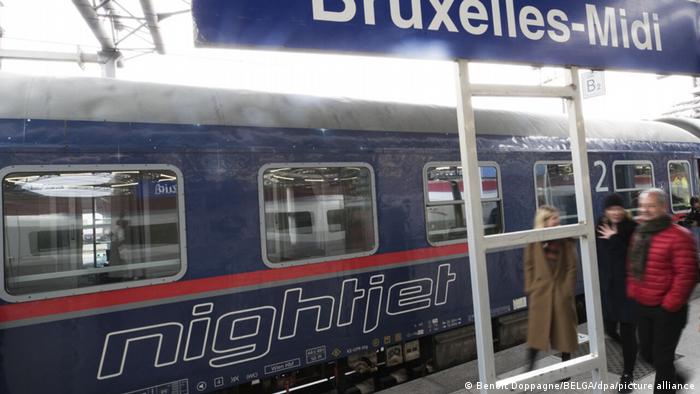 Once a common sight, cross-European sleeper trains are something of a rarity at present, with just a pair of operators

Trans-European night trains, which have become rare in recent years except for sleepers run by Austria's ÖBB and TrenItalia, are to be reinvented under a joint initiative involving German rail giant Deutsche Bahn (DB), ÖBB, Swiss SBB and France's SNCF.

By 2024 travelers, perhaps instead of boarding budget airliners, will be able slumber as they travel between 13 European metropolises — with connections to cities including Amsterdam, Paris, Rome, Brussels, Barcelona, Munich, Berlin and Vienna.

Signing their memorandum of understanding on Tuesday, chief executives of all four said the project was "part of overall efforts within the European Union to reduce carbon dioxide emissions" and create "environmentally friendly mobility."

It also demonstrated political backing in all four capitals, they said, committing to "stronger cooperation at all levels" across Europe's rail network.

Describing the night train venture as a "business between partners," Deutsche Bahn boss Richard Lutz said the "solution is a clear division of labor, embedded in genuine team play."

Likely to hamper such plans in the short term, say experts, is a current lack of individual sleeper carriages providing COVID-friendly space, instead of communal six-bed sleeping spaces.

Deutsche Bahn dropped its night trains in 2016, declaring them unprofitable, but handed some overnight routes through Germany to ÖBB's Nightjet (whose services had to halt because of COVID-19).

In recent months amid Europe's climate debate, German Transport Minister Andreas Scheuer spoke of reviving Germany's Trans-Europ Express (TEE). Those premier trains ran from 1957 until 1987 — across borders of the-then European Economic Community (EEC), Austria and Switzerland — and were replaced by DB's ICE (Inter-City Express) links and other comparable services. But most of these run in the daytime, operated by one national train company or another.

A TEE version "2.0" was a "very concrete result" of EU transport minister consultations and the German 6-month period holding the rotating European Council presidency, Scheuer boasted on Tuesday. The rail operators cited the additional costs of sleeper trains, which require different carriages and facilities to typical commuter locomotives, as a reason that cooperating would pay off.

Good news, 'also for the climate'

Germany's ecologist VCD mobility club demanded: "It's also high time that all major European cities from Moscow to Lisbon and from Naples to Stockholm are connected by fast trains around the clock."

But Mofair, an alliance of privately-owned rail operators that run regional trains on DB's rail network, said the four-nation initiative would amount to a "subsidized cross-border night train cartel," harping back to the past.

German opposition Left parliamentarian and rail reform advocate Victor Perli said Germany's transport ministry had "indeed understood" that competition would not generate such services and that politics had a steering role.

Also planning new night train services is Sweden, home of climate activist Greta Thunberg. From 2022, these are to run between Stockholm and Hamburg and Malmo and Brussels.

Existing operators currently include Regiojet, based in the Czech Republic, the Nightjet services run by Austria's ÖBB, and Italy's EuroNight services, with Prague, Warsaw and Budapest among destinations.

Prompted by the coronavirus pandemic, Spain's Trenhotel trimmed some of its night time services earlier this year.

Patricia and Mathilde wanted to work abroad, while Christian had planned to take part in international music competitions. The coronavirus pandemic has forced them to change their plans. How are they coping?