As Tripoli strives to get back to normality and enjoy its new-found freedom after Gadhafi's rule, disturbing reports have emerged of alleged indiscriminate violence against blacks many of whom are Libyan nationals. 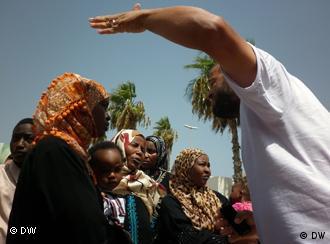 Blacks are reportedly being targeted by Libyan rebels

"They grabbed my two brothers last night and took them to prison. We're black, that´s our only crime," Zeinab Muhamed, a Tripoli resident told Deutsche Welle.

At first glance, the atmosphere at Tripoli's former sport club - opposite the city's main harbour - has changed dramatically. Yesterday's yacht and sailing boat owners have been replaced by prisoners and their relatives waiting outside. All of them are black residents of Tripoli's old town, Medina.

"None of them are Libyans. Those guys we keep inside are all foreigners paid by Gadhafi to kill our people, what are we expected to do with them? They are mercenaries, you know?" local rebel council officer Abdulhamid Abdulhakim told Deutsche Welle from the main gate. Apparently, the unexpected visit of foreign journalists to the makeshift prison has made him nervous.

"Did you know that Gadhafi would never let journalists work the way you're doing it now? Isn't that real proof of democracy in the new Libya?" says the officer.

"They say we're not Libyans but that's not true," says Zeinab Muhamed in response. "I was born in Chad but we moved to Sebah - 900 kilometers (560 miles) south of Tripoli - 20 years ago. We have had Libyan passports almost since the day we moved."

Old town resident Salwa Eisa is also queuing at the main entrance. She's carrying a bag with food for her husband.

"We arrived from Chad two years ago and Abdulllah, my husband, has worked doing all sorts of things except accepting money from Gadhafi to kill people," the 36-year-old explains. She concurs with the rest of the relatives gathering outside the sport club jail: "Our main problem is the color of our skin."

During his four-decade-long rule, Gadhafi opened the doors of Libya to a lot of migrants from the neighboring countries looking for a better life. Little wonder here, as Libya's small population of around six million hardly matches with the sheer size of the north African country and its huge oil resources. Most of them were used as cheap labour but the alleged large numbers of foreign black nationals recruited by Gadhafi is said to lie behind the mistrust of many Libyans today. 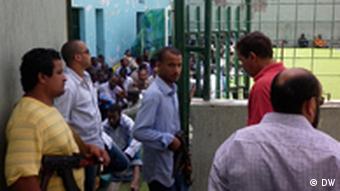 Make-shift jails have been set up in Tripoli's old town

Back at the makeshift jail, both guards and relatives stamp on a carpet portrait of Gadhafi at the entrance. A few meters away, dozens of black men sit down on a narrow strip of shadow.

"I came from Ghana last year because my brother told me it was easy to find a job as a street cleaner. It seems that all of them are black. I swear I've never ever held a weapon in this country," prisoner Abiki Martens told Deutsche Welle just before we were prevented from speaking with the prisoners.

"They're not under arrest. We're keeping them here until we finish our investigation. Those who haven't been involved in violence will be released immediately but the guilty ones will be shifted to Jdeida prison - Tripoli's main detention center," Ali Mohamed told Deutsche Welle. The 22-year-old armed man claims to be a "chief inspector" from the rebel-led National Transition Council (NTC).

According to the local officials, they have plenty of proof that those held were involved in violence: Weapons found at their homes, war wounds or mobile images of the prisoners holding a weapon or the fact that they were staying among Gadhafi loyalists.

"We all know each other in this district," explains one of the guards. Another adds that former prisoners would suffer "the cruelest tortures during Gadhafi's regime" and that, today, prisoners are "well-fed and never touched" by the rebel policemen in Tripoli.

Deutsche Welle was told that there are 50 prisoners in the makeshift prison.

"I cannot give you an exact number of the people we've arrested during the last days but I guess we're talking of around 5,000 of them in the whole city," Tripoli's Military Council spokesman said at a press conference last week.

Many Tripoli-based international reporters are using words such as "manhunt" to describe the events in and around the country's capital. Last week, DW witnessed the arrest of at least 30 black citizens in Tripoli's old town. The rebels were organized in groups of 10 cutting off the entrance to the narrow streets and taking the prisoners away on foot. 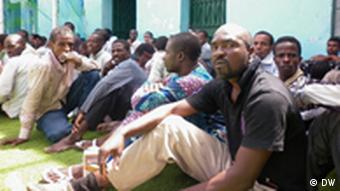 Several local residents have told Deutsche Welle that they feel increasingly afraid. Many of them added they were planning to move either to their native countries or to Europe.

Mohamed el Gadi of the local NGO "Together for the Country" says some of the reports have been exaggerated. "We have visited several detention centers over the last five days and we haven't come across any prisoners being mistreated," he told Deutsche Welle.

Nonetheless, other more senior NGOs appear to reach a different conclusion. In a report released by Humans Rights Watch on Sunday, the New York-based humanitarian organization called on the NTC to stop the "arbitrary arrests and abuse of African migrant workers and black Libyans assumed to be mercenaries."

The report also said that "widespread arbitrary arrests and frequent abuse have created a grave sense of fear among the city's African population."

"It's a dangerous time to be dark-skinned in Tripoli," Sarah Leah Whitson, Middle East and North Africa director at Human Rights Watch said.

Amnesty International has also denounced what it said were several episodes of indiscriminate violence against black citizens which included the beating of patients by armed rebels.

"We have to fear that what may be happening to detainees is out of the sight of independent observers," said senior director Claudio Cordone.

Back in Tripoli's old town, Medina, the muezzin calls for sunset prayers. At night, men will hide at home and only gangs of kids and teenagers will walk down these narrow and dirty streets. If the current trend of night raids continues, some of them might be forced to visit their fathers in jail tomorrow.

With the fighting between rebels and the remnants of the Gadhafi regime now focusing on the former leader's hometown, residents in Tripoli are trying to readjust their lives - amid growing humanitarian concerns. (29.08.2011)

In pictures: Racism in Libya