Quadriplegic: 'Weakness is a treasure'

Quadriplegic Philippe Pozzo di Borgo - known from the biographical film "The Intouchables" - says people need to take better care of each other. He may rely on a caregiver, but does everything he can to help others. 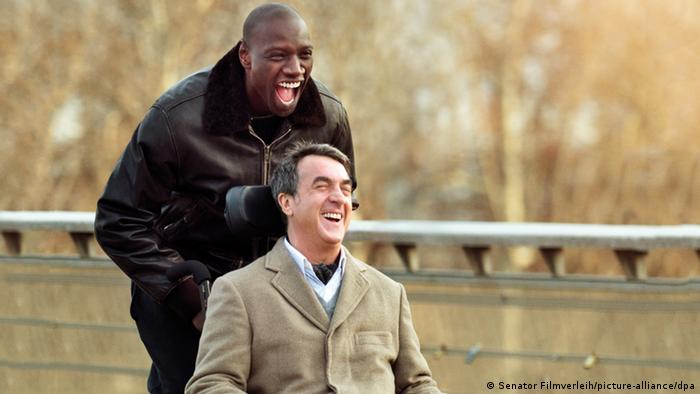 Philippe Pozzo di Borgo is surprisingly energetic. He's just gotten off the plane after a strenuous flight from Morocco to Cologne, but insists he's feeling "very well as always."

Anyone who's read his book, "A Second Wind: The True Story that Inspired the Motion Picture 'The Intouchables,'" knows that below-zero temperatures like those in Cologne right now can cause unbearable pain for quadriplegics.

Algerian caretaker Abdel Sellou steers Pozzo di Borgo's wheelchair. The two are making an appearance at lit.Cologne (06.03-16.03), one of Europe's largest literature festivals. Sellou and Pozzo di Borgo were inseparable for 10 years and as the caretaker gives the quadriplegic a straw to drink from, it's clear that they still fall back easily into their practiced routines.

Sixty-one-year-old Pozzo di Borgo makes no secret of his aristocratic background. In his autobiography, which first appeared in France in 2001, he wrote that he had grown up in an aristocratic family in France and had been born "with a golden spoon in his mouth."

He was at home in castles and later, as manager of a champagne empire, he led a fast-paced jet-set lifestyle. Until a paragliding accident in 1993. 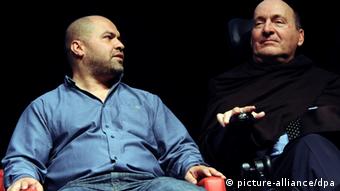 At the age of 42, he began the next chapter of his life - confined to a wheelchair. Money is not an issue, but that's the only aspect of his previous life that hasn't changed. The past 18 years have been marked with loss, pain and readjustment. Three years after his accident, his wife Béatrice died of cancer. These were blows that forced him to ponder life more deeply than the average person does.

Pozzo di Borgo's diagnosis is dire. "Our society is in the middle of a crisis," he says. "People are insecure because they don't know what their future will look like."

The finance crisis only intensifies this sentiment, he adds. The lit.Cologne audience can sense how he would have liked to underline his words with gestures. Instead, his eyes and head are all the more expressive.

His message is simple: "People need affection and altruism; they need to take better care of each other." Pozzo di Borgo doesn't distinguish between handicapped and non-handicapped people:

"All people are dependent on each other. Handicapped people can play the role of the guardian because they remind us of the finiteness of life. We're not always beautiful, athletic, immortal. We are - the older we become - fragile."

Actually, he adds, if we look closely we'll find that handicapped people are in the majority in society. And that is what he attributes to the huge success of the film about his life, "The Intouchables" (2011).

At its core, the fim is about the people who are reliant on a society in which they themselves are invisible. Pozzo di Borgo is keenly aware of the importance of helping others, since he can no longer live without relying on other people.

Even his caretaker Abdel Sellou, who was played by French actor Omar Sy in the film, needed help. Pozzo di Borgo first hired Sellou shortly after he had been released from prison. The Algerian immigrant, then in his early 20s, was a petty criminal who came from Paris' notorious banlieues.

Pozzo di Borgo helped him become a better person. "I used to just be concerned with myself," Sellou says. "I was a lone wolf, egotistical and unscrupulous. In short, I was 'normal.'" The friendship with his new employer changed everything, he adds.

The caretaker interjects a bit of humor, with statements like, "I used to enter houses like Pozzo di Borgo's through the window instead of the door," or "Until then I had never heard of a shepherd who voluntarily let a wolf into his pen," referring to Pozzo di Borgo's willingness to take a chance on his new caretaker. Sellou had never expected to get the job.

"If I'd asked Abdel to kill me, he would have done it," Pozzo di Borgo counters. This dark humor, which also comes through in the film, where François Cluzet plays the quadriplegic man, is a kind of survival strategy.

Since the film's release in 2011, 55 million people in 60 countries have seen the touching story of Pozzo di Borgo and Sellou's friendship. The movie unexpectedly rose to become France's biggest cinema success of all time.

Sellou no longer lives in the Paris banlieues, but has started a business and now breeds chickens in Algeria. And he's written a book as well. "For someone who's never even read a book in his life, 'You Changed My Life' was a 250-page thank you letter," he said of his best-seller.

Philippe Pozzo di Borgo has also written a second book. "Tous intouchables?" (Is Everyone Untouchable?) is a manifesto for a united society - principles that he lives out in practical ways. Profits from the film and DVD sales go to Simon de Cyrène organization, which builds innovative living facilities where handicapped individuals and their caregivers live together under one roof, day and night.

Philippe Pozzo di Borga is not an unhappy person, he emphasizes. He has a different definition of happy, which doesn't have anything to do with having a successful career. "I help too," he says. "I listen. Those who help me have problems of their own."

He no longer makes his home in Paris, but lives in Morocco with his second wife. His inbox is always full of emails from people asking him for advice. He's become a symbolic figure, someone in whom others find strength. He replies to every email.

Lit.Cologne shows how even a literature festival can make a contribution: The discussion is simultaneously translated into sign language, and the front row of the venue is reserved for wheelchairs.

The books written by Pozzo di Borgo and Sellou are currently being reworked to reach a wider audience. A shorter version with simplified language is in the making for people who have difficulty reading - a very large segment of the population which has been almost entirely ignored on the book market until now.

Pozzo di Borgo's commitment is inspiring. Where does he get the energy to do it all? "Weakness is not a handicap," he says, "but a treasure that others still have to discover."

DW caught up with Brit literary star David Mitchell at the lit.Cologne festival where he talked about the pan-European roots of his writing, finding himself on the big screen and what to expect from his upcoming opera. (12.03.2013)

Spaniard with spina bifida a hero for disabled kids