A trip to the Gaza Strip by the emir of Qatar can be viewed as part of broader changes to the political landscape in the Middle East. It is an indication of what things might look like in the future. 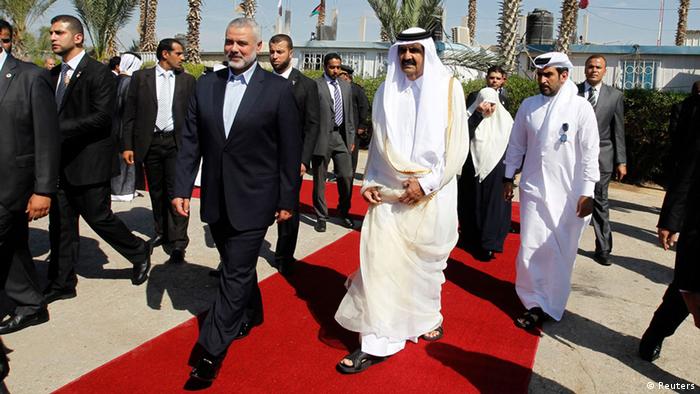 It is a matter of perspective what you might consider a large sum of money or what are just peanuts. Some $250 million (193 million euros) is what Qatari Sheik Hamad Bin Khalifa al-Thani brought with him on his visit to the Gaza Strip. Part of Gaza is still in ruins following the Israeli raids of 2009. The plan now is to rebuild Gaza City with the emir's money and found a new town, "Hamad City", named after the Qatari leader.

250 million dollars is a lot of money for poverty-ridden Gaza. For Qatar, it is not much at all - merely "peanuts," says economist Hamadi El-Aouni of Berlin's Free University. To rebuild the Gaza Strip, it is by far not enough. But it's a signal; the start of a strategy to weaken the Syrian regime's influence and to isolate Iran. The benefit for the Palestinians is only the second priority of Qatar, says El-Aouni. 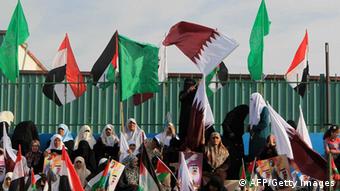 The economist says the emir's visit has to be seen in a wider context. It is part of an internationally coordinated deal where the actors want to reorganize the Middle East; in particular after the uprisings of the past two years and in light of the ongoing civil war in Syria. The goal is to win Hamas over to the side of the pro-Western countries like Egypt, Turkey and Jordan. "It is unimaginable that the emir would visit Gaza without the US, Saudi Arabia and Israel first having given a green light for the trip. His visit is in the context of the entire Middle East strategy," says El-Aouni.

But this strategy is also in the interest of Hamas. The visit by the emir is a boost to the party's domestic standing, explains Nidal al-Zeghier, a political analyst with the Palestinian human rights organization Badil. Hamas hopes that the money will send a message to the population; namely, that the group is quite capable of helping the people, he says.

Since they have little to crow about in terms of domestic or foreign policy successes, they can use the publicity from the Qatari support to draw a line under the recent past of inner-Palestinian tensions. For years, the Islamist Hamas has been caught up in a testy standoff with their secular rivals, Fatah, which controls the West Bank. The latest efforts to mediate between the two sides came, in fact, from Qatar. And, although differences remain, the small steps taken toward better ties could lead to one day standing side-by-side in pushing for a Palestinian state.

A new image for the Islamists

However, El-Aouni explains, this would likely be met with resistance from Israel. It was no coincidence that the emir only visited the Gaza Strip and not both parts of the Palestinian territories. The fact that he did not visit the West Bank is, in the eyes of El-Aouni, a political concession to Israel. "I don't think that Israel would have played along with that. This would have been an expression of the Palestinian's demand for a separate territory. And Israel won't accept that." 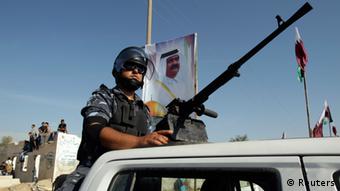 For poverty-ridden Gaza, the Qatari dollars mean aid and recognition

With regards to foreign policy, the visit also suited Hamas, explains analyst Nidar al-Zeghier. The group is striving for more international legitimacy. "In that respect, the connection to Qatar is very useful for Hamas." To bolster their political credentials, they gave up their headquarters in Damascus earlier this year, he said, "and they were supported in that by the Gulf states, Egypt and Jordan. Now, the seat is in Qatar."

So the visit by the emir was in the political interest of all the participants. Cutting ties with Syria means that Hamas is also cutting ties, at least partially, with Syria's Shiite ally, Iran. Instead, the Palestinians are finding new partners in the western-oriented and Sunni Middle Eastern countries. It gives them a different kind of legitimacy while their new partners see an opportunity to tone down Hamas' controntational posture toward Israel.

If the numbers all add up, Syria and Iran will lose Hamas as the partner spearing the drive against Israel. Both Tehran and Damascus have benefited from this aura in the past until Syria's brutal crackdown on protests turned the tables on them. Fewer Arab states now buy into their claim that they are on the frontline against Israel. Of course, Hamas is likely to use its new allies to influence Israel and further its own cause.

The revolution in Syria and the suppression of the opposition has rocked the entire region. And the emir's trip to Gaza indicates what things could look like in the future.

Israeli marines have seized a Finnish-flagged schooner as it tried to enter Gaza coastal waters. The Estelle was carrying 20 pro-Palestinian activists, including European parliamentarians, and humanitarian aid. (20.10.2012)

Life behind barbed wire in Gaza

Though local elections are slated for the West Bank, Palestinians in Gaza won't be casting ballots. Hamas, which controls Gaza, has boycotted the elections, leaving the 1.6 million people there in a difficult position. (19.10.2012)

The fishermen from Gaza have a dangerous job. Israeli soldiers, often armed to the gills, obstruct their work. Last week, a 22-year-old fisherman was shot dead. (06.10.2012)