Fishermen from Gaza risk their lives at work | World| Breaking news and perspectives from around the globe | DW | 06.10.2012

The fishermen from Gaza have a dangerous job. Israeli soldiers, often armed to the gills, obstruct their work. Last week, a 22-year-old fisherman was shot dead. 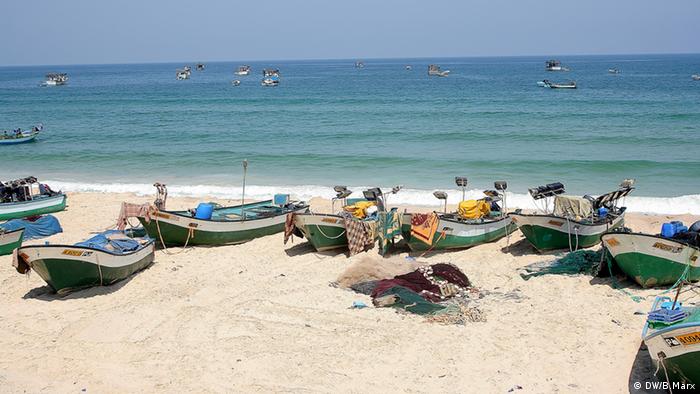 It's early morning in Gaza, and the fish market is buzzing with activity. The fishermen have put their catch on display along the coastal road on the Mediterranean beach. Small sardines are shimmering silver in blue plastic tubs. There are also a few shrimp in the tubs, but there are hardly any bigger fish on sale at the improvised marketplace. 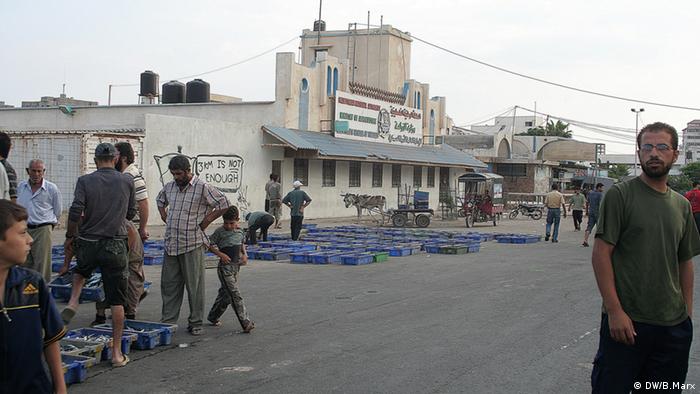 The fish market in Gaza City early in the morning

Amid the haggling, Ahmed has brought 25 boxes of fish to the market today - he was only able to catch small sardines. And even for them he had to drive far to the south tip of the Gaza Strip. Here in the North off the coast of Gaza City, the sea is depleted. There are not even sardines here anymore. In order to catch anything Ahmed has his boat down in the harbour of Rafah, on the Egyptian border.

"At five in the afternoons I drive to Rafah," he said. "From there I go out to sea to fish. I come back the next morning around 5 and drive back to Gaza City."

The sea has been sealed off

But no matter whether Ahmed goes fishing in the North or in the South of the Gaza Strip, he is not allowed to go far because the Israeli navy patrols the sea. The navy ensures that no one goes beyond the three-nautical-mile (5.5-kilometer) restricted area that Israel has imposed on the Gaza Strip.

"In the past, before the Intifada, we were allowed far out onto the sea," Ahmed said. "They reduced that to 15 nautical miles, then nine, then eight and now it's only three."

The Oslo agreement between Israel and the PLO set the fishing zone limit at 20 nautical miles. But over the years, Israel has tightened the blockade of the Gaza Strip. Since 2009, fishermen have only been allowed to leave the coast for a maximum of about three nautical miles.

Israeli officials have said the three-nautical mile policy is in place because fishing boats have been used for smuggling arms and other security offenses.

Shrinking the fishing zone has had a major impact on catches. In 2011, 383 tons of sardine were caught. Back in 2008, when the fishermen were still allowed to fish six miles off the coast, they caught 1,963 tons. Some 3,600 fishermen, their families and the processing industries are affected - up to 70,000 people overall.

But limiting the fishermen to the three-nautical-mile-zone has also caused overfishing in the areas that are close to the coast. In the long run, this threatens the stocks. Many fishermen from the Gaza Strip have already given up their profession. Instead, they now buy fish from the Egyptian fish farms and import them to Gaza. 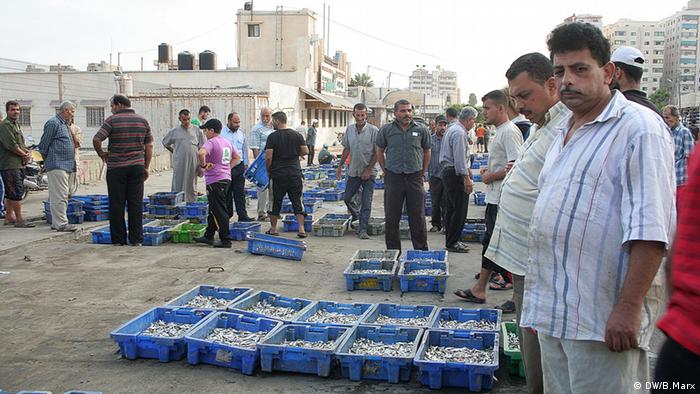 On the fish marekt in Gaza, the fishermen put their meagre catch on display

Danger on the sea

On Rafah beach, Muhammad and Khalil pulled their small boat, a so-called "hassake," out onto the sea and started the engine. The two cousins used to have two boats. But only one is left - the other one was made unseaworthy by the Israeli navy who shot at it a few months ago, the pair said.

"It happened on July 6th, at four in the morning," Muhammad said. "We went out about three miles, until the border of the permitted fishing zone, where we cast our nets."

The two cousins tried to flee. "Then they fired shots," said Muhammad. "They destroyed the engine of Khalil's boat and I had to tow him, but then they also fired shots at me." 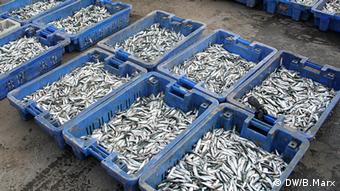 In the waters off the coast, only small fish are left

The two men reached the border unscathed but with a destroyed engine. But not all fishermen manage to escape the Israeli soldiers successfully. One week ago, a young man was killed in an Israeli attack, and his brother was injured.

An Israeli army spokesman said their soldiers had fired on two Palestinians who had entered a restricted zone near the security barrier separating Israel and the Gaza Strip in the Beit Lahiha sector.

"The soldiers spotted these Palestinians, who continued to advance towards the barrier in a prohibited area despite warning shots. Then the soldiers opened fire on them," the spokesman said according to the AFP news agency. He denied that the Palestinians had approached from the sea.

Fishermen are arrested out on the open sea and are towed to the Israeli harbor of Ashdod. Muhammad said he had been arrested several times, his boat has been confiscated. On most occasions, Israeli soldiers have sent him back after a few days with a warning not to go out fishing any more. But Muhammad and his cousin can't stop fishing. About 40 family members depend on their work for their survival.

The non-governmental organization Euro-Mid has committed itself to document human rights violations against Palestinians. Between January 2011 and April 2012, Euro-Mid counted 150 assaults against fishermen. Sixty fishermen were arrested, amongst them nine minors. Twelve men were injured by shots. Thirteen boats were confiscated, nets were destroyed or damaged and many of the men were threatened and humiliated. 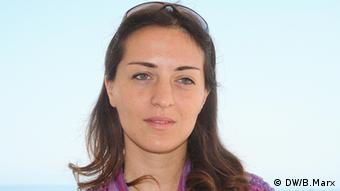 Activists from abroad support the fishermen of Gaza. They accompany the small fishing boats and try to keep the Israeli navy from launching attacks. Rosa Schiano of the International Solidarity Movement (ISM) in Gaza regularly accompanies fishermen and documents the assaults by Israel's war vessels against the fishing boats from the Gaza Strip.

"Israeli war vessels tend to arrive at very high speed and cause big waves around the fishing boats," the Italian Schiano said. "The soldiers fire water canons or shoot with their rifles. They aim at the water, too, to scare away the fish. They tear the fishing nets apart and obstruct the fishermen's work."

Israel's foreign minister has said the Jewish state will not accept any revision of its peace treaty with Egypt. The Islamist government in Cairo has launched an offensive in the Sinai Peninsula to root out militants. (23.09.2012)

French prosecutors have opened an inquiry into the 2004 death of Palestinian leader Yasser Arafat. The probe will investigate claims that Arafat may have been murdered by being poisoned with polonium. (28.08.2012)

Egypt reopens its border with Gaza

Egypt has reopened the border crossing into Gaza, following weeks of fighting on the Sinai Peninsula. Authorities sealed off the crossing after suspected militants ambushed Egyptian soldiers in early August. (25.08.2012)