South Korea and the US have launched joint training exercises involving thousands of troops. North Korea has carried out a missile test in protest, describing the training as an act of "intolerable aggression." 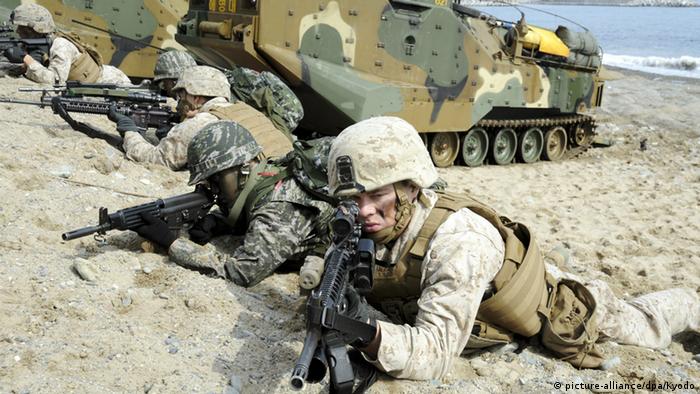 The US-South Korean military drills kicked off on Monday and are expected to run until the end of April.

Nuclear-armed, communist North Korea has repeatedly voiced its opposition to the annual military activities conducted by the US and South Korea, claiming they constitute a provocation and aim to ready forces for a northwards invasion.

In a statement, the North Korean foreign ministry called the start of the drills an act of "intolerable aggression" and said the North was ready to wage "any form of war" that the US chooses.

Washington and Seoul insist that the drills are solely defensive in nature.

The largest of the two operations, named Foal Eagle, is an eight-week exercise involving air, ground and naval field training with around 200,000 Korean and 3,700 US troops.

Around 10,000 South Korean and 8,600 US troops will participate in a second week-long drill, Key Resolve, to improve combat ability.

North Korea carried out a missile test as the military drills got underway on Monday. Two ballistic missiles were fired from an area near the western port city of Nampo and traveled about 500 kilometers (310 miles) before landing in waters off the east coast, South Korea's defense ministry said.

"We will respond sternly and strongly to any provocation," Kim said.

Japan said it had lodged a complaint with North Korea through diplomatic channels over the launch.

In January, North Korea offered to impose a moratorium on nuclear tests if this year's joint drills were shelved, but Washington rejected the proposal, calling it an implicit threat. The isolated state has carried out three nuclear tests - in 2006, 2009 and 2013.

The two Koreas remain in a technical state of war because the 1950-53 Korean War ended with an armistice, not a peace treaty. Earlier this year the neighbors floated the idea of opening a dialogue to pave the way for reunification.

Pyongyang has test-fired five short-range missiles into the sea off its eastern coast. The weapons test took place one day after the country test-fired a high-precision rocket. (08.02.2015)