An initiative in a village on the Greek-Turkish border that divides Cyprus attempts to bring the two cultures together. But decades-old political rivalries still serve as a wall between the two societies. 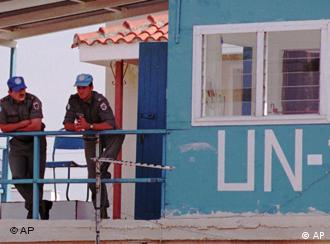 A choir made up of both Turkish and Greek Cypriots entertains together at a party thrown in the buffer zone that separates the Turkish half of Cypress from the Greek half. The singers in the choir are all residents of Pyla, a village in the buffer zone that is inhabited by both Turkish and Greek Cypriots. The fete, a cross-cultural project organized by the United Nations observers who patrol the border, is a rare example of the two sides coming together.

"We cannot normally mix together, Greeks and Turks are enemies," says Lina Melidiou. "But the people of the choir make their own decisions and their own thoughts about the future. Our vision is much different."

There are two houses of prayer in Pyla – a Greek Orthodox church and a mosque. Though the two communities live side-by-side, as one of the few ethnically mixed viallges on the island, they have little to do with one another. Greek Cypriots play backgammon in one café, Turkish Cypriots in another. Yet despite the social differences, there are few other places in Cypress where the two sides have worked together, and the international community sees the Pyla choir as a model for reconciliation.

But how far can it go?

"You have to wait 20 to 50 years to see what the people would think for each other and then make more steps and more steps," says Ahmet Sakalli, a local Greek resident. "What we have at this moment -- Greeks on this side, Turks on the other side -- is much better."

Others believe unity will come sooner.

"People who are working for the military and the secret service of the North, they surely don't accept this," says Stavros Stavroru. "But I believe that the majority of the Turkish Cypriots accept they are part of the united Cyprus. But I think that will take place. It's our destiny, anyway."

United Nations peacekeeping troops have been present in the divided Cyprus since 1964. Their mandate expanded in 1974 after hostilities ceased. Today, sporting blue baseball caps, the U.N. peacekeepers look relaxed as they patrol the village. Their mission is to monitor the situation and remain neutral. But images like this minefield warning sign show that the area is not without danger. 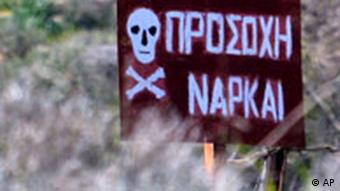 A minefield warning in Pyla.

In the run-up to Cyprus’ admission into the European Union in 2004, the U.N. and the EU have desperately sought to broker a deal to reunify the island in time for its accession. So far, neither side is budging, and it appears only the southern, Greek half will enter. The irony of the situation is the two politically sparing halves both have a stake in the EU. Greece has been a member since 1981 and Turkey is currently a candidate for EU membership, but those aspirations have done little to hasten a deal on Cyprus unity.

Following a stern warning from the European Union on Wednesday that a failure to reach a deal to reunite Cyprus could threaten its own chances of EU membership, Turkey said on Friday it might consider a deal following elections in Northern Cyprus scheduled for Dec. 14.

That election has posed a dilemma for the government since, on the one hand it wants to hold on to the island’s political division and, on the other, it wants to get reelected.

In the meantime, the island’s 771,657 residents are locked in a state of limbo.

At a local school for Greek Cypriots in Pyla, first-graders are learning to read, but at this point nobody knows what country they’ll grow up in. Meanwhile, Turkish Cypriot children attend another school.

The children never play together, not even the occasional game of soccer. Even if they wanted to, their parents would forbid them. The students’ teacher thinks that’s a shame. She’d like them to learn tolerance as well.

But there are signs things are changing already. In April, Turkish Cypriot President Rauf Denktash relaxed border controls, and the mood is already more optimistic. Turkish Cypriots from the economically weaker north are flocking to the Greek-Cypriot zone in search of better-paid jobs in places like Pyla.

Rehearsing for a common future

The members of Pyla's multicultural choir, meanwhile, would like to see more integration soon. The atmosphere at a choir rehearsal is upbeat as the group begins a language lesson. 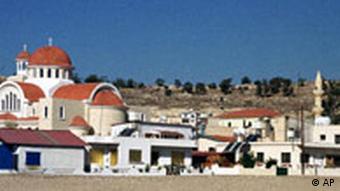 The Orthodox Christian Church, left, and the minaret of the Muslim mosque, right, in Pyla, one of Cyprus's few ethnically mixed villages.

"Our religion is different but we are born in the same country, so we look like each other," says Melidiou. "I don't see any difference. We like to be friendly with everybody so why not if this is something that makes a contribution. We’re optimistic."

Like many others, the choir hopes the island will soon reunite. It’s members sing songs of freedom, love and tolerance. Melidiou says the choir is like a family to her, and that is should serve as a model of reconciliation on the long-divided island.

EU says Cyprus could be Obstacle to Turkish Bid

The European Union on Wednesday praised recent reforms by Turkey. But in its annual expansion report, Brussels said the country still had to make substantial progress before it could take up negotiations to join the EU. (Nov. 5, 2003)

Life is becoming increasingly restrictive for Afghan women under the Taliban. A series of deadly bombings on education centers has sparked protests, that have ended in violent police crackdowns. And how Japan is creating cyborg cockroaches to search for survivors of earthquakes.