Putin′s new limousine coming out of the blue? | Business | Economy and finance news from a German perspective | DW | 07.05.2018

Putin's new limousine coming out of the blue?

Ditching his Mercedes, Putin traveled to his inauguration in a Russian-made limousine. It was a patriotic move amid increased tensions with the West. Here's what we know about the new car. 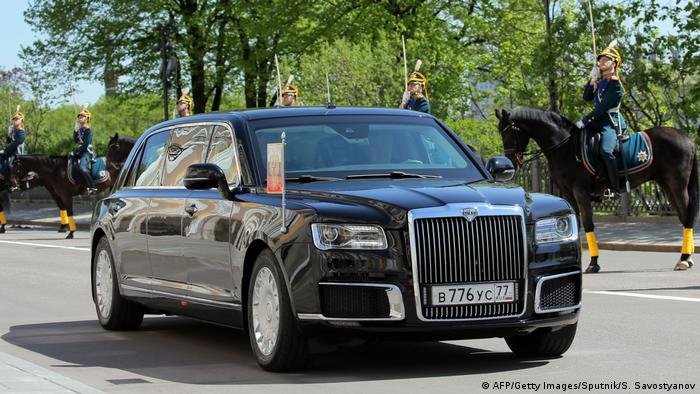 It marked the first public outing of the new car, part of the Kortezh series of vehicles which is also expected to include a sedan, minivan and off-road model.

Development of the limousine on show on Monday started in early 2013. The car was produced by a Russian research center called NAMI and will in future be distributed in partnership with domestic carmaker Sollers.

Trade Minister Denis Manturov said state officials would be able to switch to Kortezh cars when enough of them became available. He added the cars would be marketed under the brand Aurus and made available from the beginning of 2019.

A reporter from the Rossiya 24 TV station said 5,000 units of the brand would be available by 2020, with the limousine to cost as much as a Bentley or Rolls Royce.

In power since 2000, Russian President Vladimir Putin has always wanted his nation to reduce its dependence on imported goods and technology. It's a drive that's gathered momentum since Russia was hit by Western sanctions over its perceived role in the Ukraine conflict.

Russian media on Monday made a point of emphasizing that the limousine Putin used to travel to his inauguration was "made in Russia and was built with the help of homemade components."

In fairness, the reports mentioned that the engine was developed in cooperation with German sports carmaker Porsche. The government supported the limousine project with 12.4 billion rubles (€164 million, $195 million) in subsidies.