Russian President Vladimir Putin has called on Kyiv and separatists to call an end to hostilities after heavy fighting in eastern Ukraine. Putin said he backed a peace plan drawn up by the Ukrainian president. 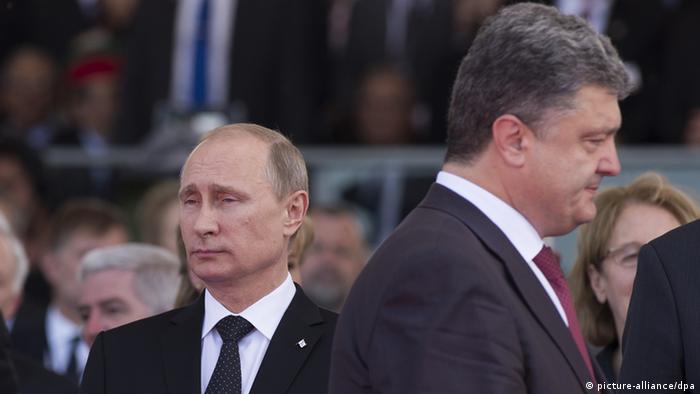 On Sunday, Putin called for genuine dialogue between Ukraine's government and pro-Russia separatists fighting for control of the eastern regions of Donetsk and Luhansk. As part of any deal, he said, Ukraine should first halt military operations in the regions and guarantee the rights of Russian speakers.

On Friday, Ukrainian President Petro Poroshenko had announced a unilateral peace plan, which Russia slammed as little more than an ultimatum for the separatists to put down their arms. Poroshenko said on Sunday that he would talk to those who were not involved in the armed uprising, a move that Putin appeared to welcome.

"Russia will certainly support these intentions," Putin said. "But, at the end of the day, the most important thing is a political process. It's important for dialogue between all warring parties to originate on the basis of this peace plan."

Putin also stressed that the violence was continuing, highlighting the use of artillery on Saturday.

"Military operations have not stopped," he said. "I can't say who is doing this - whether this is a regular army or whether these are the armed units of some rightist forces - but this is happening."

Though Putin had given a measured response approving the plan on Saturday, he had also sent a conflicting signal, by ordering the Russian military in the Urals and Volga regions to be on full combat alert.