Russian President Vladimir Putin has welcomed a call by his Ukrainian counterpart for a ceasefire in the east of Ukraine. However, he also dismissed Petro Poroshenko's peace plan as unviable. 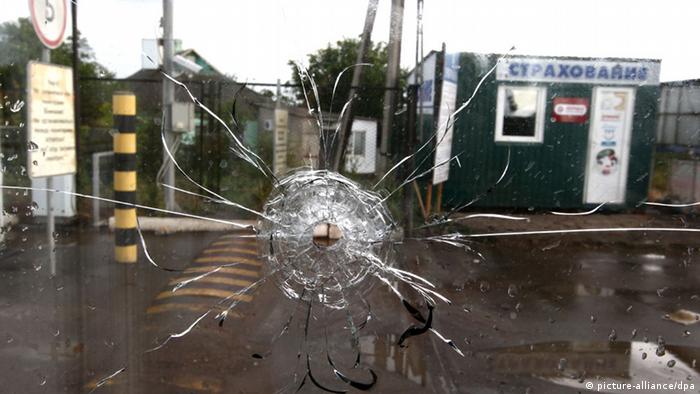 A statement released by the Kremlin on Saturday said that President Putin did not believe the peace plan unveiled by President Poroshenko on Friday would work, partly because it had "the characteristics of an ultimatum for the insurgents."

He also said it lacked any provision for launching peace talks between the Ukrainian troops and the pro-Russia separatists who have declared parts of the east of the country to be independent from Kyiv.

"The proposed plan, if it is not followed by concrete moves towards a dialogue, will be neither viable nor realistic," the statement said.

At the same time though, Putin supported Poroshenko's call for the two sides to lay down their arms.

"The president of Russia calls on the opposing sides to halt any military activities and sit down at the negotiating table," the statement said.

Poroshenko's 15-point peace plan includes an order for a one-week unilateral ceasefire by Ukrainian troops. It also includes an offer of amnesty to the separatists and a pledge to implement constitutional reforms to protect the Russian language.

However, despite the truce offered by Kyiv on Friday, fighting continued in some parts of eastern Ukraine on Saturday, with several combatants reported to have been injured. When ordering Ukrainian troops to hold their fire from Friday evening, Poroshenko also said that the country's soldiers would respond in defense to any attacks by separatist gunmen.

The response of the West to Poroshenko's peace plan was in stark contrast to that of Russia. A spokesman for German Chancellor Angela Merkel said on Saturday that "it was now time to seek a political solution and that the peace plan presented by the Ukrainian president served as a good foundation" on which to start. The plan was also welcomed by US President Barack Obama and French President Francois Hollande.

The latest Kremlin statement came just hours after Putin had ordered Russian troops in the central region of the country to go on "full combat alert."

"In accordance with his (Putin's) order, from 11 a.m. Moscow time (0700 GMT) the troops of the central military district as well as formations and military units located on its territory have been put on full combat alert," Defense Minister Sergei Shoigu was quoted as saying by Russian news agencies. The higher state of alert, in which about 65,000 troops are to take part in ground and airborne military drills in the Volga and Ural mountain region, is to last for a period of one week.

No peace without Moscow

Petro Poroshenko's peace plan is bound to fail, as neither the separatists in eastern Ukraine nor Russia are interested in a political solution, says DW's Bernd Johann. (21.06.2014)