The trial against members of the Russian band “Pussy Riot” has begun. The women face hooliganism charges after staging a protest against President Vladimir Putin in a cathedral. They could face seven years in prison. 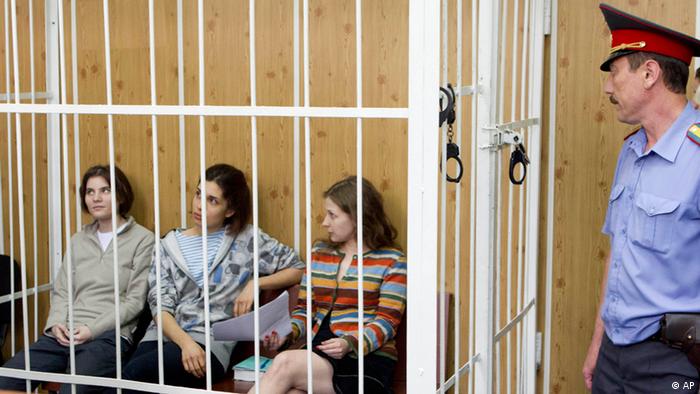 A Moscow district court opened the trial against members of the punk band “Pussy Riot” on Friday. Three of the band's female members have been charged with acts of hooliganism during a protest they staged against President Vladimir Putin in February. If found guilty, they could face seven years imprisonment.

They caused "considerable harm on sacred valuables" and "encroached on sacramental church values," according to prosecutors.

Amnesty International called for their immediate and unconditional release on Friday.

“It's unreasonable that these women have been in custody for more than four months on charges for nothing more than a misdemeanour,” Amnesty's Russia expert, Peter Franck, told the German news agency dapd.

A seven year sentence suggests that someone wants to make an “example” of the band, Franck added.

Early reports did not indicate when the three women whether the trial would be open to the public.

In February, the feminist punk band staged a protest against President Vladimir Putin in one of Moscow's largest churches, the Christ the Savior Cathedral. A video captured them chanting “Mother Mary, drive Putin away” at the pulpit and dancing in an area off-limits to laymen. The protest took place two weeks before the presidential election in which Putin received a third term.

The Russian Orthodox Church responded that the women's "blasphemous" behavior deserved to be punished, sparking public disagreement over the band's guilt.

Members Nadezhda Tolokonnikova, 23, Maria Alekhina, 24, and Yekaterina Samutsevich, 29 were taken into police custody in March. They were not formally charged until early July.

“Pussy Riot” gained notoriety from other anti-Putin protests that went viral. In January, they sang “Putin Chickens Out” on Moscow's famous Red Square.