One of the band's leaders, Maria Alyokhina, managed to escape house arrest disguised as a food courier. DW met Pussy Riot as they start their European tour.

The artists' collective Pussy Riot wants to provoke and protest — against Russia's "political system that uses its power against basic human rights." Their trademark: colorful balaclavas. Their opponent: Vladimir Putin.

"There is no perspective for Russia with Putin, that crazy man who could start a nuclear war by pressing a button," said Pussy Riot co-founder Maria Alyokhina. Putin should be arrested immediately and put on trial, the activist told DW. She added that Putin needs a permanent war, the regime doesn't want peace but wants people to be in constant "survival mode."  Putin's state "built everything on that, and can't live without it."

As threats started to multiply, Alyokhina decided it was time to leave the country. She has now managed to flee Russia. She described the adventurous circumstances of her escape to The New York Times. Placed under house arrest by Russian authorities, she escaped with the help of a trick: She was disguised as a food delivery service employee.

A friend then took her to the EU border in Belarus. But she didn't get to leave the country at first since her passport was confiscated and she was on a Russian "wanted" list.

She is not afraid of the Russian leadership. "How could I be afraid of them? They are puffed up like a big demon, but on the inside, they are very disorganized, very corrupt and very stupid," she said. It took them five days to notice she was gone, Alyokhina added.

The Putin critic said she doesn't believe statistics that claim 80% of Russians support the war. She is convinced people won't tell the truth because Russia "has an article in the criminal code forbidding us to call the war a war." 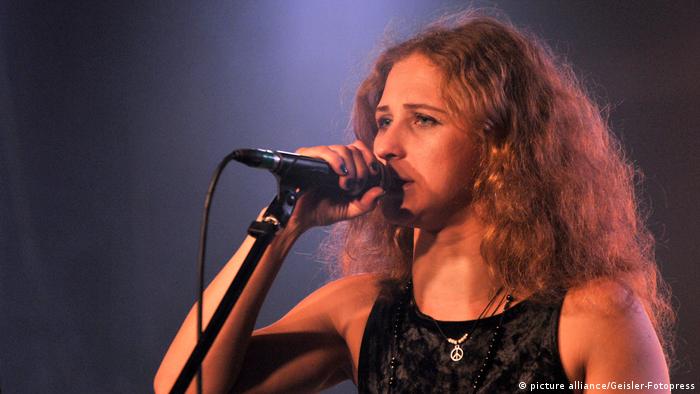 Maria Alyochina sings at a concert in Madrid in 2019

Thanks to a friend — Icelandic performance artist Ragnar Kjartansson — she was able to obtain European documents, allowing her to enter Lithuania.

In the capital, more and more Pussy Riot members (there are a dozen or so in all) gathered and began rehearsing for their European tour, which begins on May 12 in Berlin.

Pussy Riot is in different places, in Russia and abroad, said Alyokhina, adding she has no idea how many members there are since it is not a closed club. "Anyone who acts like Pussy Riot, is a part of Pussy Riot. If you feel like doing something as Pussy Riot, go ahead!"

On tour, the band will also be demonstrating solidarity for Ukraine.

This February, the band auctioned NFTs for a picture of Ukraine's blue-yellow flag. In the first 24 hours, the auction brought in $3 million (€2.84 million), which Pussy Riot gave away to the non-profit organization Come Back Alive. The NGO helps equip Ukrainian soldiers with technical devices like night vision glasses and infrared cameras. 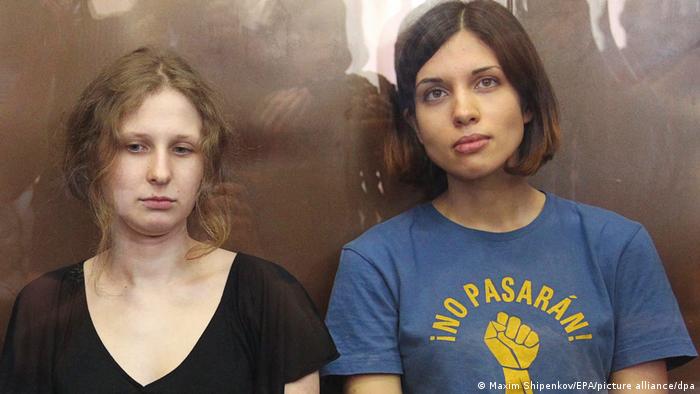 Maria Alyokhina and Nadezhda Tolokonnikova sitting in a courtroom in 2012

Proceeds from the ongoing concerts will also be sent to Ukraine. "I have a lot of friends in Ukraine," Pussy Riot member Nadezhda Tolokonnikova told Rolling Stone. "I think Ukrainians are extremely brave, beautiful, fierce and inspirational."

She added that Ukrainians understood that not all Russians support Putin. "And that distinction is really important to me because a lot of Russians are protesting and going to the streets to restore their freedoms and lives."

Tolokonnikova knows that it is dangerous to protest against Putin, but that doesn't mean she will stop criticizing him. At a New York City concert held a few days after Russia's invasion of Ukraine, the singer-activist repeated how much she hates Putin. "I hope he dies soon," she told fans.

Founded in 2011, Pussy Riot's early acts included guerrilla punk rock appearances in the Moscow subway or in front of the Kremlin. The singers demanded more rights for women and LGBTQ groups and brought attention to different kinds of repression. 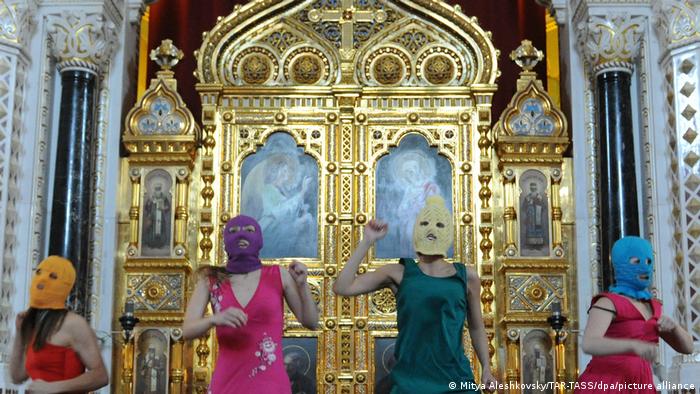 In early 2012, the band sang "Punk Prayer" in Moscow's Cathedral of Christ the Savior, admonishing the Russian head of state's close relations with the Russian Orthodox Church.

The Kremlin was quick to react: Frontwomen Maria Alyokhina and Nadezhda Tolokonnikova, the known faces of the group, were punished with two years at the penal camp in Siberia for "hooliganism," despite international protests.

The fight goes on

But the band was not one to be silenced. They went on hunger strikes in prison to protest abuse and harassment and described in letters the inhuman conditions at the camp.

Soon after their release, owing to a pardon at the end of 2013, they declared they would stand up for the rights of prisoners in their country. They called for solidarity with prisoners who were arrested because of their resistance to Putin's regime and founded the initiative Zona Prava (Zone of Law) which organizes legal help for detainees.

Outside Russia, their actions gained a lot of attention. The band held concerts in London, Madrid, Berlin and New York and even in the European Parliament in 2014, where Nadezhda Tolokonnikova and Maria Alyokhina demanded sanctions against Moscow.

But back in Russia, they were barely acknowledged in public life, although Putin's agents always had their eyes on them. Even in 2014, when they were awarded the Hannah Arendt Prize, they told DW about permanently being surveilled by men who monitored them and behaved suspiciously. 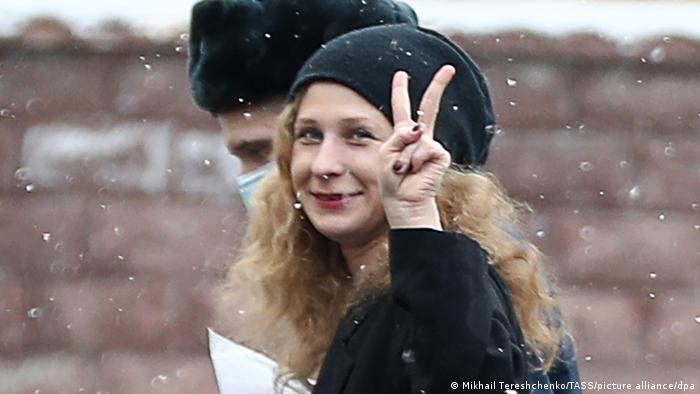 Maria Alyochina making a 'V' sign at the press in March, 2021

Repression against free expression became more and more extreme, while Russian state broadcasters close to the regime either silenced Pussy Riot or reported about band members getting arrest for minor stunts.

In summer 2021, shortly before the Duma elections, many members of the collective fled to Georgia following increasing repression by Moscow. Those who stayed back were placed under house arrest, underwent physical punishment or had to pay penalties, and were declared state agents.

Despite Russia's increasing repression, the band wants to continue protesting against Putin's Russia. The project "Riot Days," with which the band is going on tour, is based on a book of the same name by band member Maria Alyokhina.

In this book, she relates her experiences as a performer with Pussy Riot, life in the penal colony and the perpetual struggle against repression. Electric sounds, rhythmic talking and live music narrate an impressive story of rebellion, repression and revolution in a merging of concert, demonstration and theater. One thing is clear: Pussy Riot love their country, but in the eyes of many Russians, they are traitors.

Four members of the Russian activist group Pussy Riot who disrupted the World Cup final in Moscow say they have been detained again, just as they walked free from prison after serving a 15-day sentence.