A member of Russian protest group Pussy Riot has been released from a German hospital after recovering from a suspected poisoning. The activist says he's "convinced" he was targeted by Russia's secret service. 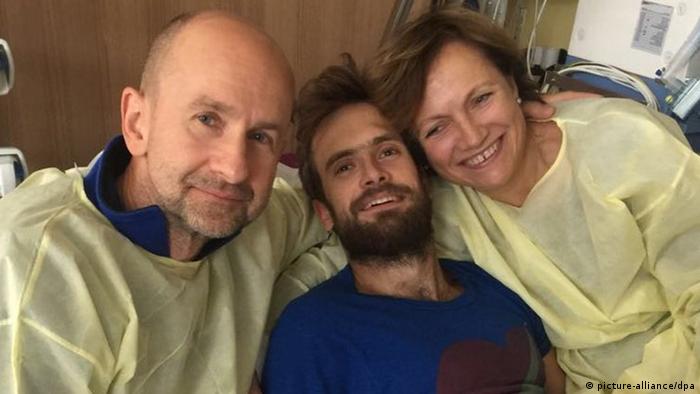 Pussy Riot activist Pyotr Verzilov was discharged from hospital in Berlin on Wednesday after making progress in his recovery.

"The patient's health has considerably improved," the Charite hospital said in a statement.

Doctors at the facility found no traces of poison in Verzilov's body, but say the "absorption" of a poison was the "most plausible explanation" for his condition.

Verzilov: It was Russia's GRU

The Kremlin critic fell ill in Moscow two weeks ago and was admitted to a local clinic before being flown to Germany for urgent treatment. He was suffering from symptoms including disorientation and loss of vision.

The German daily Bild newspaper on Wednesday quoted Verzilov as saying he was "convinced" Russia's GRU military intelligence agency had poisoned him, possibly because he had been investigating the killing of three Russian reporters in the Central African Republic (CAR). The slain trio had been reporting on the activities of a Russian private military contractor.

"The poisoning was so professional that I can't draw any other conclusion," the 30-year-old activist said.

Charite's chairman, Dr. Karl Max Einhäupl, said tests had not singled out a specific substance that might have caused the illness, but added that the hospital was in contact with its Moscow counterparts to get more information on Verzilov's initial treatment.

'Watching his every move'

Police had been positioned at the entrance to the Charite hospital while he was there, and members of the force were in continuous contact with his family, Pussy Riot member Nadezhda Tolokonnikova told DW while she was in Berlin earlier this week to visit Verzilov, her ex-husband.

Tolokonnikova, who has since left the German capital, said the measures were implemented to respond to possible spying by Russian security agencies. Over the weekend, she said, Verzilov's friend Hunter Heaney hadnoticed "two suspicious Slavic-looking people, as he described them, that were watching his every move."

Veronica Nikulshina, another member of Pussy Riot and Verzilov's current partner, told DW the activist was supposed to receive a report on the Russian journalists in CAR from foreign researchers on September 11 — the day he was instead brought to a Moscow clinic after his health unexpectedly deteriorated. He was then transferred to the toxicology department of a hospital in the Russian capital. The Russian newspaper Novaya Gazeta reported a similar sequence of events.

Nikulshina said the presence of police officers outside the hospital was important because "we all have either pieces of or full information on the investigation."

"The police protection is necessary to keep Pyotr and all of us safe," she added.

Verzilov and other Pussy Riot members served 15 days in jail for storming onto the pitch during the World Cup final in Moscow to protest against police brutality.

Verzilov told Bild that if he hadn't been in jail for the stunt, he would have joined the group of reporters heading to CAR, adding that one of them was a close friend.

"That could be the reason why the secret service wanted to poison me. I consider it to be a more likely motive than the World Cup demonstration," he said.