Residents of Puerto Rico have battened down the hatches as Dorian approaches. Hundreds of emergency shelters have been opened, and a state of emergency has been declared by US President Trump. 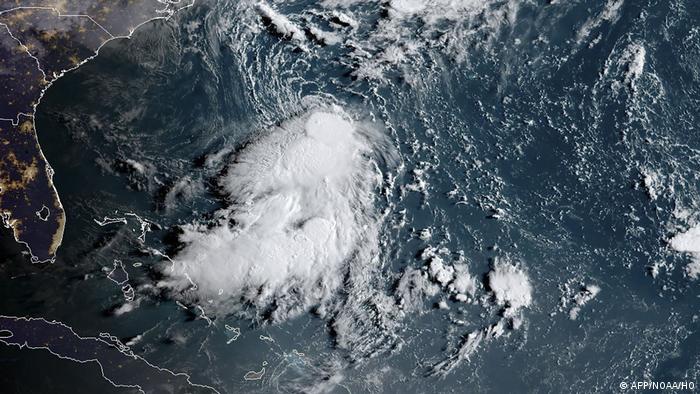 US President Donald Trump declared an emergency Tuesday night and ordered federal assistance for local authorities as Tropical Storm Dorian made a last-minute shift in its path, threatening Puerto Rico with a direct hit.

US forecasters warned Dorian could reach hurricane strength by the time it reaches the US territory on Wednesday, two years after the deadly Hurricane Maria ravaged the island.

"Practically the entire island will be under sustained tropical storm force winds," said the director of US National Weather Service San Juan Roberto Garcia during a press conference on Tuesday. However, the forecast could change overnight, said Garcia, adding that late shifts occur with storms such as Dorian that do not have a well-defined center.

The Federal Emergency Management Agency (FEMA) said about 3,000 agents had been deployed and were "ready to respond."

The US National Hurricane Center said it had maximum sustained winds of 50 mph (85 kph) and was forecast to strengthen during the next 24 hours before passing south of Puerto Rico as it moves west-northwest at 13 mph (20 kph).

"Wow! Yet another big storm heading to Puerto Rico. Will it ever end?" tweeted US President Donald Trump, who has previously demonstrated annoyance with the massive emergency bill resulting from hurricane damage in the unincorporated US territory.

Governor Wanda Vazquez Garced signed an executive order on Monday declaring a state of emergency and urged those living under an unsafe roof to stay in one of the island's 360 shelters if needed.

Dorian already caused power outages and downed trees in Barbados and St. Lucia as it traveled through the Caribbean Sea and North Atlantic Ocean. A still-uncertain long-term forecast showed the storm near Florida over the weekend.

Tropical Storm Erin has also formed well off the coast of the US, forecast to move northward and north eastward over the open Atlantic with no threat to land.

Puerto Rico's transportation secretary acknowledged that crews are still rebuilding roads damaged or blocked by Maria. He said more than 1,000 remain blocked by that storm's landslides.

The death toll in the months after Hurricane Maria was raised from 64 to 2,975 by the island's governor. Harvard researchers have put the death toll from  Maria at 4,645. The storm caused more than $90 billion in damage.

President Donald Trump has lashed out at the mayor of San Juan and other officials in Puerto Rico. Ten days after the territory's most powerful storm in 90 years, Puerto Ricans are slowly getting federal relief. (30.09.2017)

World in Progress: Preparing the Florida Keys for what's next