Publishing house under fire for self-censorship over Koran comments | Germany| News and in-depth reporting from Berlin and beyond | DW | 06.10.2009

Publishing house under fire for self-censorship over Koran comments

A German publishing house has backed out of printing a novel out of fear it would be judged as insulting to Muslims. Critics have accused the company of censorship and pandering to extremists. 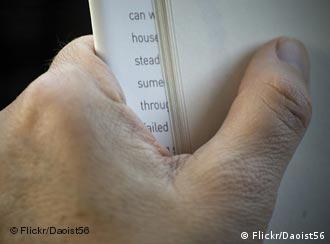 A line of dialogue in the text was judged offensive

Droste Verlag said on Tuesday that it had cancelled the printing of a murder mystery, "To Whom Honor is Due" by Gabriele Brinkmann, because the author refused to alter passages in which a character makes derogatory remarks about the Koran.

The story has attracted media attention, with German papers and pundits accusing the publisher of self-censorship and bowing to intimidation from extremists.

The novel, which centers upon a fictional "honor killing," was due for release last month. The publisher cited concerns about retaliation from Islamists, fearing an uproar like that which followed a Danish newspaper's publication of caricatures of the prophet Mohammed in 2005.

Company executive Felix Droste reportedly had asked an expert on Islamic society to review the manuscript for things that might cause extremists to want to harm his family or his business. The expert had suggested changing that line.

"After the Mohammed caricatures, one knows that one cannot publish words or drawings that defame Islam without incurring a security risk," Droste told Spiegel.

Brinkmann, who wrote the book under the pseudonym W.W. Domsky, said that she refused to change the wording as a matter of principle.

"It's a scandal for the publisher to just tuck its tail between its legs like this. This is anticipatory obedience," Brinkmann told German media.

A spokeswoman for Dusseldorf-based Droste said that the company has a tradition of publishing controversial books, but would not publish those that insulted religions - whether Islam, Christianity or others.

"We do not want to offend religious groups," Nora Tichy told Reuters.

The controversy over the Danish caricatures has been used by other publishers as justification for changing or restricting a book's content. In August, Yale University Press edited them out of a book about the controversy, "The Cartoons That Shook the World," by Danish-born politics professor Jytte Klausen. Other images depicting the prophet Mohammed were removed as well, with Yale Press Director John Donatich citing security concerns as the reason.

This week's suicide attack on Denmark's embassy in Pakistan was revenge for cartoons Danish newspapers published of the prophet Mohammed, according to al Qaeda, which claimed responsibility for the attack. (05.06.2008)

Curtain Opens on Idomeneo Without Incident

Ringed by riot police, one of Berlin's three opera houses Monday staged a controversial production of Mozart's opera Idomeneo, three months after fears of violence had led to its sudden cancellation. (19.12.2006)

The EU's Austrian presidency rallied Monday to the defense of the freedom of the press and expression amid growing Muslim anger about controversial Danish cartoons portraying Prophet Mohammed. (30.01.2006)