This week's suicide attack on Denmark's embassy in Pakistan was revenge for cartoons Danish newspapers published of the prophet Mohammed, according to al Qaeda, which claimed responsibility for the attack. 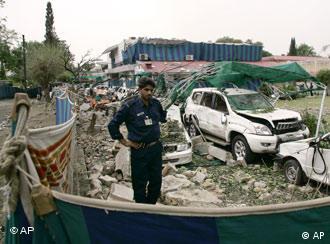 Denmark has been a terrorist target

According to a statement published Wednesday, June 4, on militant Web sites, the attack was an act of revenge for "what the infidels from the so-called state of Denmark have published, the insulting cartoons of the prophet Mohammed," according to a translation by the US-based SITE Intelligence Group Monitoring Service, which monitors terrorist content on the Internet.

It added that the bombing was a warning to others.

"This should serve as a warning to the infidel countries regarding their crimes against our prophet Mohammed... They must apologize immediately or else this will only be the first step in our struggle."

The authenticity of the statement could not be determined.

Several Danish newspapers published cartoons in 2004 which many in the Islamic world found insulting. The Mohammed cartoons triggered riots in early 2006 in several Muslim nations, including Pakistan.

Danish newspapers then reprinted the cartoons in February 2008 on freedom of speech grounds. The publication triggered further protests.

On Monday, a bomber blew up an explosives-laden car carrying fake diplomatic registration plates near the main entrance of the Danish embassy in the Pakistani capital. Among those killed were a Danish national of Pakistani origin and two of the embassy's local employees.

The blast badly damaged both the embassy and the nearby offices of a UN-backed aid agency.

Danish intelligence officials said that the attack had been meticulously planned for a "long time."

"Preliminary information gleaned from the car used in this suicide attack seems to indicate that it had been planned for a long time with precision," said Denmark's secret services.

Denmark has three experts in Islamabad as part of the investigation.

Pakistani Foreign Minister Shah Mehmood Qureshi condemned the attack. "There can be no justification for such an action," he said.

At least six people died and more were injured in a car bombing outside the Danish embassy in Islamabad, Pakistan. (02.06.2008)

Authorities near the city of Aarhus said they had taken a group into custody for plotting to kill the artist who drew the most controversial of the images. But the cartoonist continues to live in fear for his life. (12.02.2008)

Roads were cut off in several Pakistani cities overnight as members of the Islamist TLP party demanded the release of their leader. Authorities say roadblocks disrupted oxygen deliveries to Lahore hospitals.