Public transport workers go on strike in Portugal | Europe| News and current affairs from around the continent | DW | 02.02.2012

Public transport workers in Portugal have launched a 24-hour strike to protest restructuring plans that are part of the government's austerity measures. It's the third such strike since November. 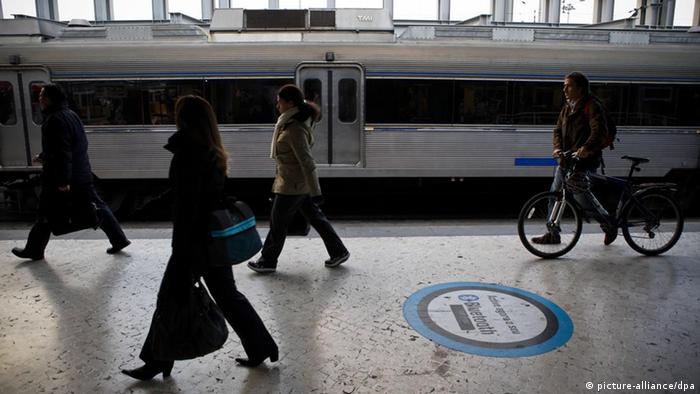 Commuters could turn to trains during the strike

Commuters in Portugal were left scrambling for alternatives on Thursday as public transport workers went on strike to protest restructuring plans that are part of the government's latest austerity measures.

In the capital, Lisbon, the metro shut down at midnight and ferry services were stopped during rush-hour traffic. Trains and busses, however, were running as usual.

The 24-hour action, third such strike since November, was launched to "protest against the strategic plan for transport," Jose Oliveira, the coordinator for the Federation for Transport Unions (FECTRANS), told the Lusa news agency. Included in the plan are measures to reduce salaries, cut jobs and privatize some of the state-owned mass transit companies. The public will also be affected with planned service reductions and price hikes.

According to government figures, the public transport sector's debts are in the range of 17 billion euros, or around 10 percent of the country's annual gross domestic product. The center-right government is implanting a harsh austerity program as part of a financial plan put forth by the European Union and International Monetary Fund.

Portugalwas given a 78-billion-euro ($102 billion) bailout last year in May last year, following earlier bailouts of Greece and Ireland in 2010.

Poor economic growth prospects for 2012 have worried EU leaders, who until now have largely been focusing exclusively on cutting deficits. But the need for stimulus, whatever its form, is increasingly recognized. (30.01.2012)