PSG striker Neymar has said Marseille's Alvaro Gonzalez used a racist insult during a brawl between the two rival teams that saw five players sent off. The Spanish defender denied the accusations. 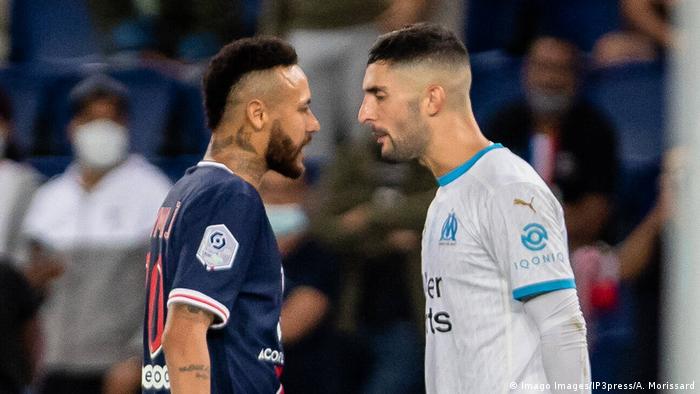 PSG striker Neymar has accused Marseille defender Alvaro Gonzalez of calling him a "monkey" during the southern French club's ill-tempered 1-0 victory over its bitter rivals that saw five players sent off.

The 28-year-old said he had slapped Gonzalez on the back of the head for making the racial slur after the pair confronted each other deep into injury time.

The altercation led to Neymar being sent off after a VAR review. A brawl ensued that also saw PSG substitutes Leandro Paredes and Layvin Kurzawa and Marseille duo Jordan Amavi and Dario Benedetto being expelled.

"Look at the racism. That's why I hit him," the ex-Barcelona forward said as he left the pitch.

"The only regret I have is not hitting this idiot in the face," he tweeted later.

"What racism?" he replied when asked about the incident by French television.

"There is no place for racism," the Spanish center-back wrote on social media. "You have to learn how to lose and accept it on the field."

His tweet included a picture of himself surrounded by teammates of different ethnic backgrounds.

Read more: Racist chants in Czech football: Jean-David Beauguel on his abuse from the terraces

The match between the two clubs is known in France as "Le Classique," a reference to Spain's "El Clasico" derbies between Real Madrid and Barcelona.

Together, PSG and Marseille are also the most successful football clubs in France, having won more than 40 domestic trophies between them.