Engineers in Berlin are working on a type of helicopter drone to help cut back on the use of pesticides and fertilizers in agriculture. The aircraft allows farmers to see exactly what their crops and soil need. 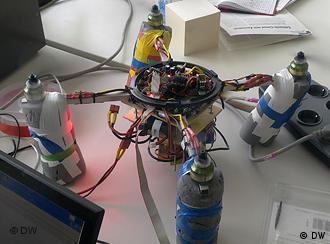 The quadrocopter is off the drawing board, but it's not in the air yet

These days, unmanned drones are normally associated with modern warfare. But the quadrocopters being developed by researchers at Berlin's Humboldt University are destined for purely peaceful purposes.

The so-called Adler project is intended to help take the pressure off ecosystems that are being overburdened with chemicals. At the same time, farmers will be able to profit from cutting back their expenditure on fertilizers and pesticides. 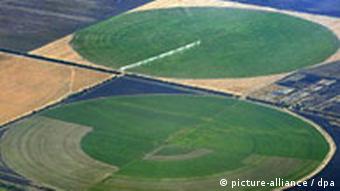 The project's aim is to give farmers a detailed map of the exact needs of their fields, so they can adjust their spraying accordingly and cut down on waste.

Sounds simple. So why hasn't it been done before? Mainly because a light airplane would be unsuitable for gathering the kinds of data required, says Verena Hafner, Junior professor of cognitive robotics at Berlin's Humboldt University, one of the partners in the project.

In contrast to a plane, the quadrocopter will be able to stay still.

"That is not possible using a normal aeroplane that can't stand still in the air," Hafner said. 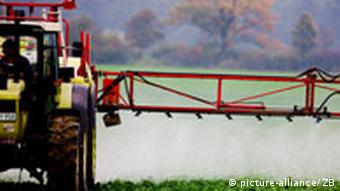 Pesticides and fertilizers can be sprayed more efficiently

Powered by four engines, and using sophisticated navigational technology, the quadrocopter is designed to fly a pre-programmed route over farmland, stopping at designated positions to take precise pictures and conduct various measurements.

Back on land, the data would be analyzed and a final map for fertilization could be ready to feed into a tractor's computer 24 hours after the first flight – an added bonus for farmers with little time for fertilizing.

There are of course problems. The maximum payload for the copter is 500 grams – that's less than a bag of sugar. And it has to support two cameras and sound sensors. There are other brain teasers too, says Ruprecht professor at the agricultural faculty of Berlin's Humboldt University and one of the driving forces behind the project.

"We are trying to find patterns in the fields…If you fly over a surface you see so many patterns, so many things and the difficulty is to interpret what is behind these patterns," he said.

This means taking soil samples, measuring their water and nutrient contents and comparing the findings against the images from the sky. It's a lot of data and it all needs to be broken down.

"This is the biggest problem - how to compile all this info," Ruprecht said.

The quadrocopter is also a challenge from an engineering perspective. The device will need to avoid obstacles, account for wind gusts, and its cameras will always need to point down.

These requirements have necessitated some tricky solutions, and the developers have often looked to nature for bright ideas. One of the quadrocopter's ultrasonic sensors is derived from bats, and the machine's navigational software is inspired by insects. 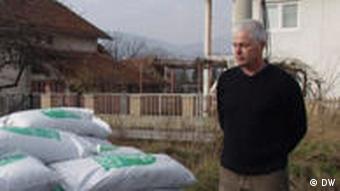 Of course, the type of fertilizer used also makes a difference

"It’s a straightforward thing to take the inspiration from nature because these strategies have evolved over the last millions of years," Hafner said.

Bang for your buck

Money is not one of the obstacles. Indeed, the anticipated cost of the quadrocpter is seen as one of its biggest draw cards. The machine is expected to cost between 1,000 – 2,000 euros to manufacture, depending upon the amount of sophisticated measuring equipment on board.

"One of the biggest problems is over-fertilization," Elpers said, adding that ground water is particularly at risk of contamination from farmers' excessive use of fertilizers these days.

"It is important for farmers to understand that economy and ecology fit together," he said. 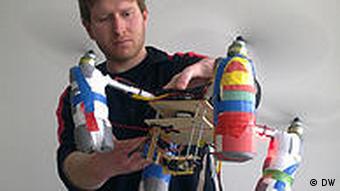 So far, two farms in northern Germany have signed up for test runs and the projects' partners claim others have expressed keen interest.

Axel Gericke, a farmer on the outskirts of Berlin, was skeptical of the idea at first. He said he knew his 160-hectare farm too well, and that it was likely to be too small to benefit from the device. But the cost of hiring the machine – between three to four euros per hectare – did prick his interest.

"It's probably not for me," he said "but at that price I would likely give it a go."

The scale of his property remains typical for much farming in Europe today, and it will be farmers like Axel that the quadrocpter's developers will need to seduce when the drone takes to the air for its first test flight in spring 2011.

Farming is going to have to change dramatically in the 21st century - not only to meet the demands of feeding increasing numbers of people, but also because current cultivation methods are not sustainable. (24.11.2009)

Post Copenhagen: Should citizens be called on to curb climate change?

Consumers' choices can help slow down climate change, yet people in rich and poor countries are interconnected, and implementing ecological measures like higher prices for imports need to be carefully assessed. (25.01.2010)

Price pressure is a topic at this year's Green Week food and agriculture trade fair, which opens Friday in Berlin. Germany producers are feeling the pinch, and a way out seems hard to find. (14.01.2010)