Protests in Berlin over Saudi punishment of Badawi | Germany | News and in-depth reporting from Berlin and beyond | DW | 11.06.2015

Protests in Berlin over Saudi punishment of Badawi

Saudi Arabia has sentenced the blogger Raif Badawi to 1,000 lashes and a decade in jail. The sentence can now only be averted by royal decree. Badawi's supporters are determined not to give up. 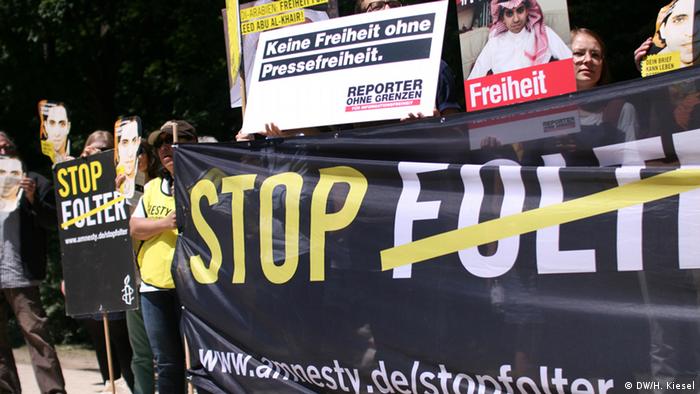 Florian Oswald, the spokesman for the Berlin chapter of Amnesty International, is standing on the edge of the pavement, his back turned to the Saudi embassy. Every Thursday since February, Oswald and others have made sure that a sufficient number of yellow vests, placards and banners sporting the Amnesty logo are available. The dedicated activists - albeit sometimes just a few - have gathered weekly in front of the embassy to protest the punishment handed to the Saudi blogger Raif Badawi, who has been sentenced to 10 years in jail and 1,000 lashes for his posts, which allegedly "insult Islam." 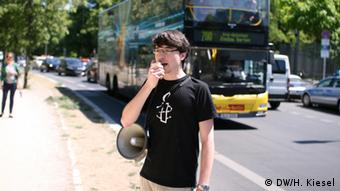 Florian Oswald is organizing the protest

"Just because he gave his opinion," Oswald says, briefly tugging at the strap across his left shoulder. Attached to it is a bullhorn. He lifts its external microphone to his chin. "Now, we will all call out 'Freedom for Raif Badawi,'" he instructs. Today, there are about 40 attendees chiming in, perhaps a little more loudly than before. Fresh - and bad - news has come from Saudi Arabia: Last weekend, its Supreme Court upheld Badawi's sentence. "We fear the flogging will resume tomorrow," Oswald says.

For the benefit of press photographers, the protesters have lined up in a row: one very close to the other, in order to create the impression that the congregation is more numerous. Today, center position is assumed by Green party leader Simone Peter and Green member of parliament Tabea Rössner. Both join the chanting, which has switched to "No Flogging for Blogging." Peter says the group shows the growing value of human rights in society: "It is essential for us to stand here today and protest against this punishment. There are many of us, all around the world." A few weeks ago, she came to know Badawi's wife, who fights for her husband's freedom from Canada. She was encouraged by this encounter and expects Germany's government to finally come forward with a clear statement. "So far," she says, "its approach has been long on rhetoric and short on delivery." 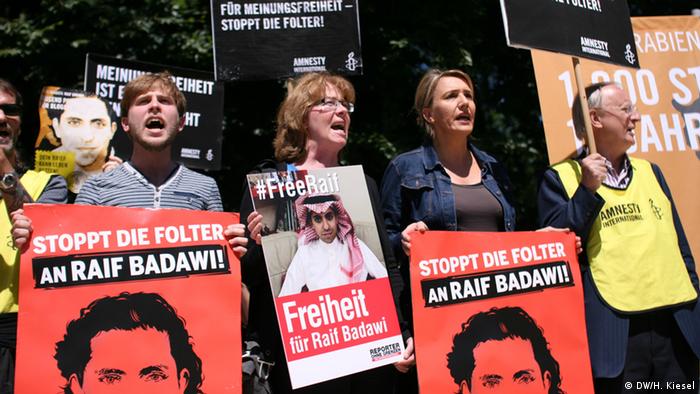 Klaus Staeck, the former president of the Berlin Academy of Arts, is standing to the right of the Green politicians. It's not his first time at the protests. "Our motto is: Keep at it," the 77-year-old artist and lawyer says. But, given the current circumstances, how can he maintain faith in Badawi's eventual release?

In terms of procedure, only Saudi King Salman can now stop the resumption of the brutal corporal punishment. Fifty lashes, meted out 19 times, would endanger Badawi's life. "He will only be lost when he slips from the public's radar," Staeck warns. 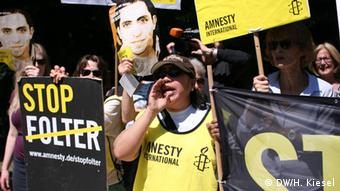 Gloria Treichel has been fighting for Badawi's freedom from the outset

People like Gloria Treichel plan to ensure that this won't happen anytime soon. Facing the embassy on the other side of the road, she is carrying a banner that reads "Stop Torture." The yellow letters are glistening in the noonday sun. "I attend at least every second week," she says. Her voice cracks from furiously shouting the words "Freedom for Raif Badawi" - the current slogan proposed by the man with the bullhorn.

"How can a king be so hard on his people?" Treichel asks herself during a short break between chants. "The situation in Saudi Arabia reminds me of the Middle Ages." In winter, she had exposed herself to cold temperatures here in Berlin's embassy district. Now, she is wearing dark shades, and little beads of sweat are on her forehead. She won't stop protesting. "It just isn't right that way," she says. "Raif simply has to return to his family."