Neither the state of emergency nor the curfew held back protesters as they took their anger over Daunte Wright's death to the streets. 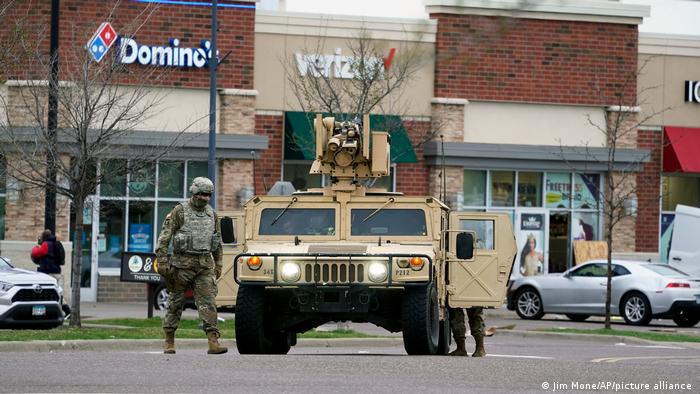 Police clashed with protesters for a second night in the Minneapolis suburb where a police officer fatally shot 20-year-old Daunte Wright on Sunday. The shooting sparked riots in an area already in turmoil over the trial for the death of George Floyd.

To prevent violent protestthe city mayors of Minneapolis and St Paul had announced a nighttime curfew on Monday.

"I have declared a state of emergency in the city of Minneapolis, and we are following that up with a curfew that will begin at 7:00 pm (0000 GMT/UTC) tonight [and] go until 6:00 am tomorrow morning," Minneapolis Mayor Jacob Frey told a press conference.

Still hundreds of protesters faced off against police in Brooklyn Center after nightfall. When the protesters wouldn't disperse, police began firing gas canisters and flash-bang grenades. Around 40 people were arrested.

By 10 p.m., only a few dozen protesters remained.

Daunte Wright was killed by a police officer during a traffic stop.

The chief of police in Brooklyn Center — the suburb where the shooting occurred — said that the officer who killed Wright had accidentally used her handgun instead of her Taser after he refused to go into custody.

He described the shooting as "an accidental discharge.''

According to media reports, police video footage presented at a press briefing showed an officer trying to cuff Wright next to the car.

Wright is then seen breaking free and getting inside the car when another office yells "Taser, Taser, Taser," before firing a shot from her handgun, as per the recording.

"Holy s***, I just shot him," the policewoman is heard saying as the car drives away.

Biden calls for probe, and for calm

President Joe Biden called for a "full-blown investigation" into Wright's death and urged that protests in Minnesota be peaceful.

"It is really a tragic thing that happened, but I think we've got to wait and see what the investigation shows," Biden said in a press conference at the White House.

Brooklyn Center Mayor Mike Elliot wrote on Twitter, he had spoken to Daunte Wright's father and would "do everything to ensure justice is served".

Wright had been stopped for a traffic violation at which point the officers realized he had an outstanding arrest warrant. In the ensuing struggle, the 20-year-old was shot and died on the scene.

Authorities have been worried about escalating tensions in the city where George Floyd was killed by police last year. The trial against former officer Derek Chauvin is currently taking place not far from where Daunte Wright was shot on Sunday.

The US was rocked last year by widespread protests against police violence and racism. The protests, which sometimes ended in looting and vandalism, garnered global support.

Minnesota's professional baseball, basketball and ice hockey teams — the Twins, the Timberwolves and the Wild — were all scheduled to play at home on Monday but all postponed their games both as a mark of respect and as a result of safety concerns.

"Make no mistake, part of the decision here today is out of respect for the Wright family, but there's a big part of this decision that’s also rooted in safety and consultation with law enforcement about unknowns, about what will, or could transpire within the broader community over the next several hours, based on the news that has come out of Brooklyn Center this morning," the Minnesota Twins' team president, Dave St. Peter, told reporters.