The incident took place about 10 miles from the spot where George Floyd, a Black man, died after being pinned to the pavement by a police officer for nearly 10 minutes. A demonstrator confronts police during a protest in Brooklyn Center

Protesters clashed with Minnesota police in the city of Brooklyn Center on Sunday, soon after the death of a 20-year-old man who was shot by the police. Daunte Wright's family confirmed his death.

According to local police, officers stopped an individual on Sunday afternoon, after determining that there was an outstanding warrant for the driver. When they tried to arrest him, he reentered the vehicle and continued driving.

A shot fired by a police officer hit the driver but the vehicle continued to travel several blocks before striking another vehicle. He died at the scene. Police said the officers' body cameras were activated during the incident. 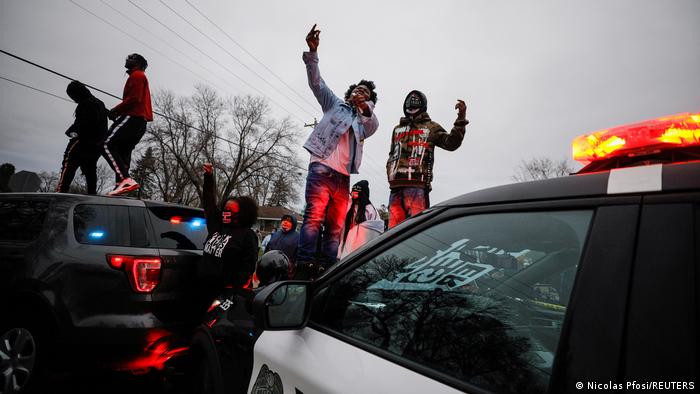 A female passenger sustained non-life-threatening injuries, according to the police.

Later in the day, around 100 people gathered near the scene and confronted police in riot gear. Rubber bullets fired by the police hit at least two in the crowd. Some people pelted police cars with stones and rocks.

The incident took place about 10 miles (16 kilometers) from the spot where George Floyd, a Black man, died after being pinned to the pavement by a police officer for nearly 10 minutes. His death sparked a worldwide outcry last year against systemic racial discrimination.

Former officer Derek Chauvin is facing charges of murder and manslaughter in the case.

Medical experts' testimony dismissed the defendant's claims that George Floyd died from previous drug use. The police officer who kneeled on Floyd's was charged with murder and manslaughter.

George Floyd and the Black Lives Matter movement have inspired street art over the past year — not only in the United States, but also in other countries.