Thousands of anti-government demonstrators took to the streets in the capital Baghdad, demanding an end to corruption and Iran's intervention. Violence broke out between police and demonstrators. 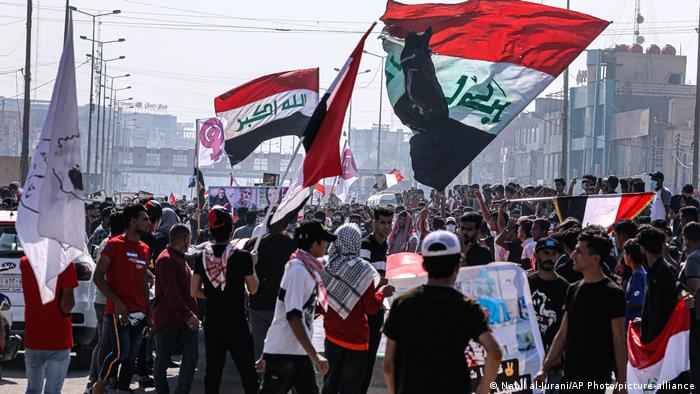 Clashes broke out between Iraqi security forces and protesters in Iraq's capital city Baghdad on Sunday, as thousands took part in nationwide demonstrations on the one-year anniversary of anti-government protests.

Peaceful demonstrations went ahead in several cities in the south including Basra, Najaf and Nasiriyah.

The cross-sectarian, youth-led protest movement first broke out in October 2019.

Tens of thousands of Iraqis took to the streets to decry government corruption, poor services and high unemployment in Baghdad and the country's south.

They also accuse Iraq's ruling class of permitting Iranian intervention in their country.

During the last round of protests, about 600 protesters were killed and 30,000 wounded in nationwide clashes after Iraqi forces used live ammunition and tear gas to disperse crowds.

The protests helped usher in Prime Minister Mustafa al-Kadhimi in May, but he has yet to deliver on any major reforms.

'We still want our country back'

The violence broke out after security forces stopped protesters from crossing a bridge leading to the heavily fortified Green Zone, home to foreign embassies and government offices.

Activists have long complained of a campaign of kidnappings and killings to intimidate them into halting demonstrations.

Uday Jaberi, an activist in the southern city of Nasiriyah, sent an angry message to politicians: "These young people didn't come out for nothing; they came to shake up the thrones you've been sitting on, you corrupt people!" he said.

"Young people who have been wounded and their families lost loved ones all for Iraq," he added.

After sunset, Nasiriyah's main square, fireworks shot up into the air as protesters pitched tents to camp out.

On Saturday, Kadhimi gave an address attempting to appease protesters while warning against an escalation. He repeatedly urged security forces not to fire at demonstrators, but also called on protesters to "respect the uniform."